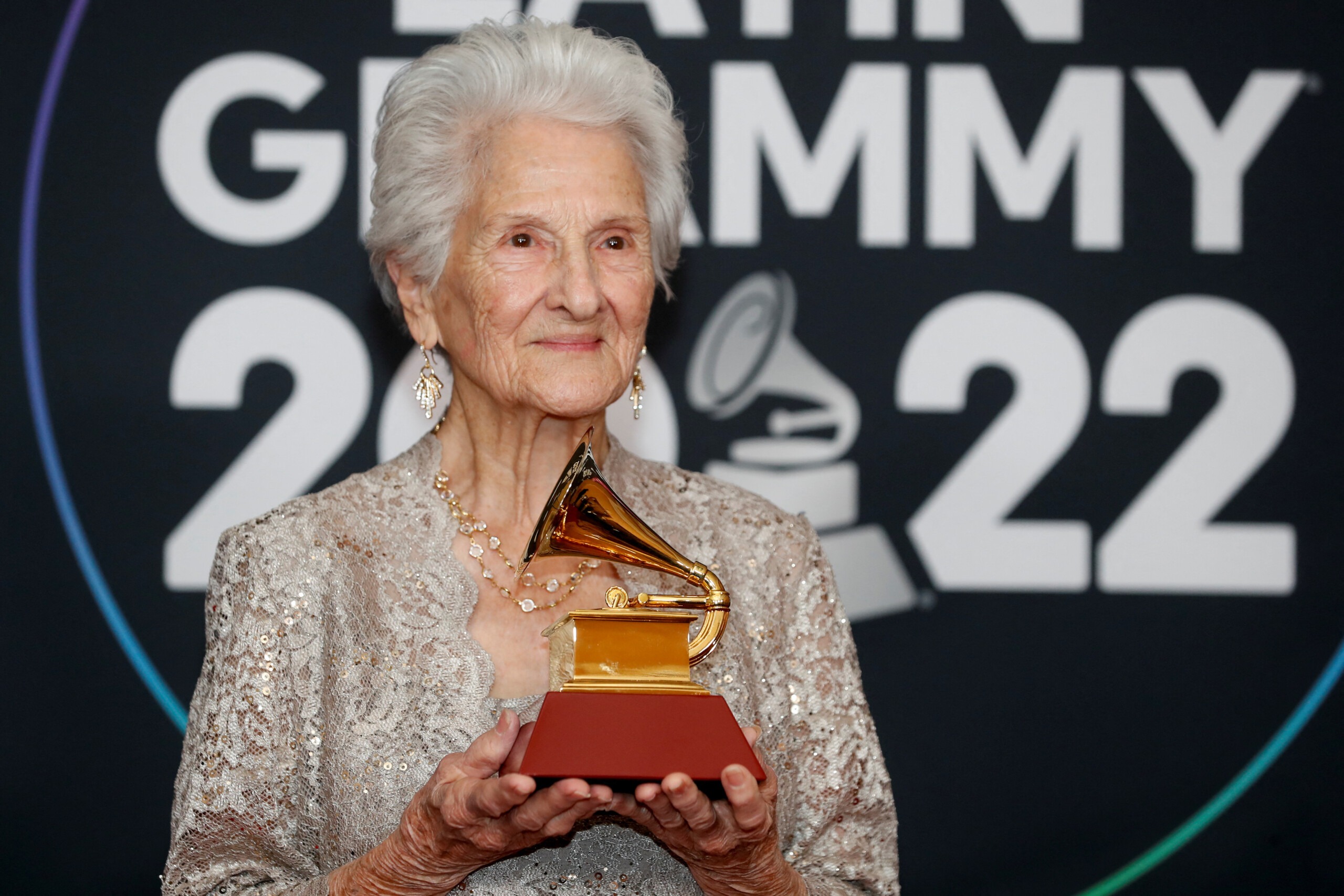 Tweet
Share
Share
Pin
Ángela assured that her nomination was an incredible surprise, she even scolded her grandson because she thought it was a joke (REUTERS / Steve Marcus)

In the 23rd edition of the Latin Grammy, Angela Alvarez she became the longest-serving winner to be awarded in the Best New Artist category, as she is 95 years old.

This Thursday night the name of Ángela Álvarez resounded at the Mandalay Bay Resort and Casino, where the Latin Grammys 2022because she turned out to be the winner in the category Best New Artistwhere he competed with singers up to 17 years old.

Beside Silvana Estradawho was also announced as the winner of the same category, took the stage and surprised thousands of people by being the oldest person to receive this award.

Ángela took the stage with the help of her grandson and producer, Carlos Jose Alvarezand gave a speech with which she sought to encourage the public to, like her, persist in achieving their dreams.

“I want to dedicate this award to God and to my beloved homeland, Cuba, which I will never be able to forget. Also to those who have not realized their dream; Although life is difficult, there is always a way out and with faith and love they can achieve it. I promise you it’s never too late”

Ángela Álvarez reached the Grammys thanks to her album released in 2021, Angela Alvarez, which contains 15 songs that were produced by his grandson. This album was successful and reached thousands of people when she began to share details of his life and captivated the jury of the National Academy of Recording Arts and Sciences. 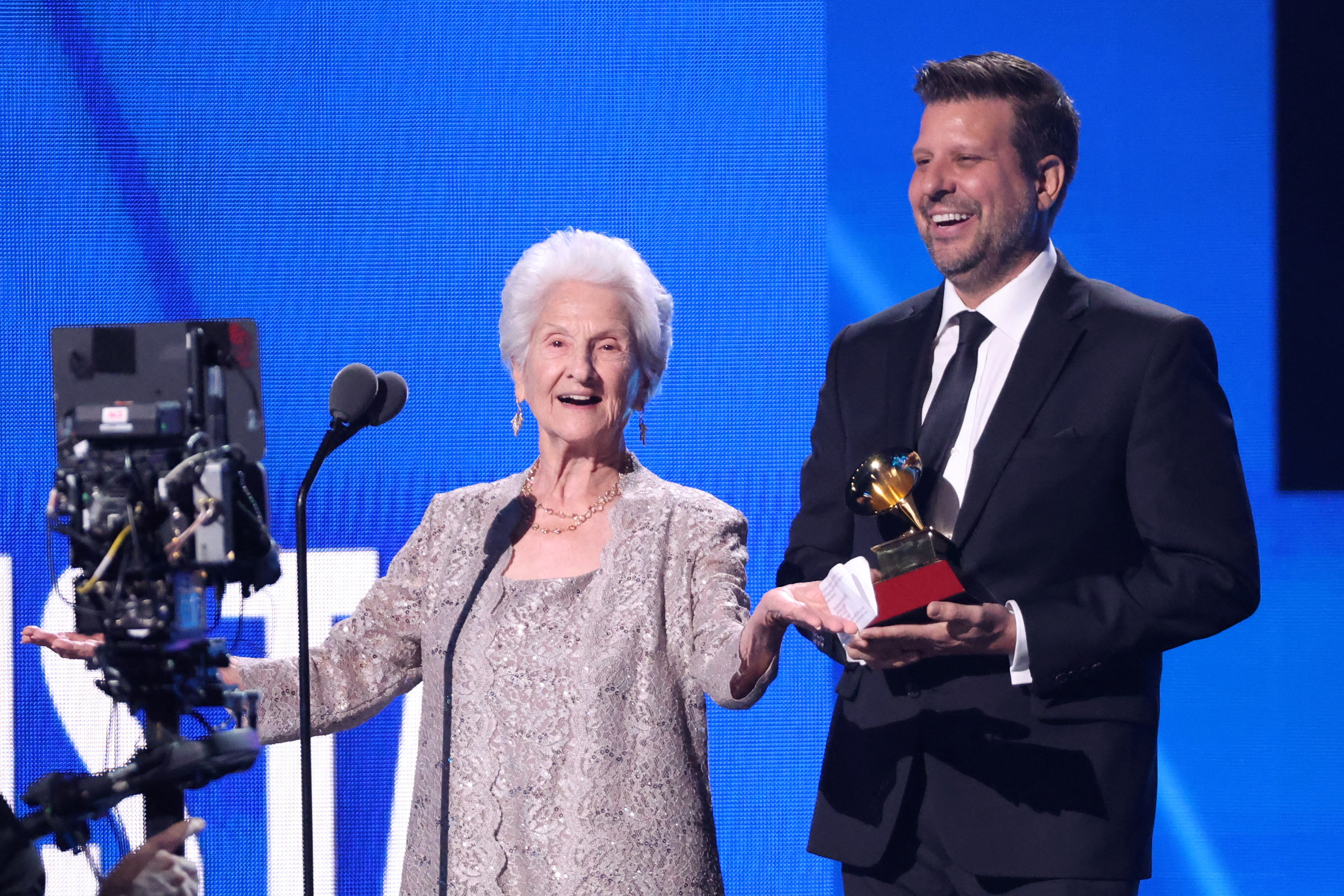 And it is that since she was a child, Ángela’s dream was to become a singer since her mother and her aunts taught her to play different instruments and, from this, she learned to compose.

In his adulthood, Álvarez started a family, had three children, but she was forced to leave Cuba and migrate to the United States, where she dedicated herself to taking care of children and also came to sing in a church choir.

When her grandson, Carlos José, grew up and realized the extensive catalog of songs that his grandmother had, since the singer had written almost 50 songs. Carlos José felt so interested in Ángela’s music that he looked for a way not to let those songs get lost in oblivion.

In 2016, when Ángela was 89 years old, her grandson suggested that she release a record with some of her songs. She doubtfully did not want to accept at first, but she accepted because he did not lose trying to fulfill the dream of his life.

Finally, in 2021 it was published Angela Alvarez, his first album. With him she conquered the public and her music reached andy garciawhom he inspired so much that he asked him to make a documentary of his life, miss angela.

All this led the Cuban to be nominated for the 2022 Latin Grammys and, from the beginning, she felt sure that she would win the award, because while her competition was no more than 30 years old, she is close to 95.

“The guys who are nominated with me are young, they can keep fighting. If they lose now, you can try again because you still have a lot left. But I can’t try again… If I’m five years away from turning 100!”, he said in an interview with The world.

Ángela Álvarez is the oldest woman to receive a Grammy.

He is 95 years old and won a Latin Grammy: the emotional award of Ángela Álvarez

Great international jazz artists perform at the most important music festival in Miami
Who is Bizarrap, the successful Argentine producer who is breaking it next to Shakira - KESQ
Big Hit Music Announces Four BTS Concerts In Las Vegas And Possible Grammy Attendance
Tweet
Share
Share
Pin
Other links: https://awardworld.net/resources/