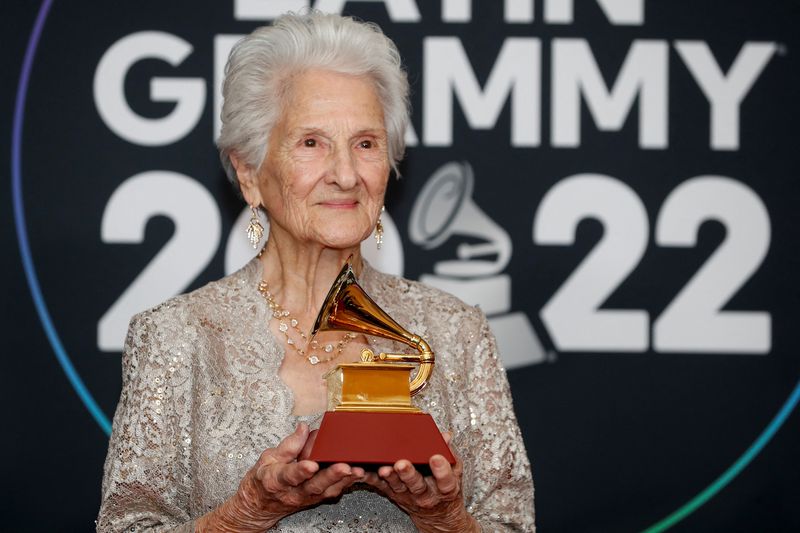 An emotional moment at the Grammy award ceremony, at the Michelob ULTRA Arena in Las Vegas, was the recognition of Best New Artist, which he had two winners; the Mexican Silvana Estrada and the Cuban Ángela Álvarez, who at 95 years oldmade history as the oldest person to win the statuette.

“I want to dedicate this award to God and to my beloved homeland, Cuba, which I will never be able to forget. And also to those who have not realized their dream, although life is difficult, there is always a way out and with faith and love they can achieve it. I promise you it’s never too late”, he pointed out when receiving the award together with his grandson, Carlos José Álvarez, who is also his music producer.

The woman was nominated thanks to her self-titled album, which she published in 2021. A work in which she brought together songs that she wrote throughout her life and that due to various circumstances she had not been able to publish.

Ángela Álvarez began playing the piano in her native Cuba. But in the boarding school for nuns where she was studying, she got to know the guitar and decided to learn it. “I wrote a letter to my dad, that I wanted to learn the guitar, and he wrote yes and I started playing the guitar and it fascinated me”, he recalled in an interview with The Associated Press agency from Baton Rouge, Louisiana, where he lives. “All the parties there were and gatherings at school, I was the artist playing the guitar.”

Over the years, the guitar became a hobby. “My husband really liked that I sing -he detailed in the same interview-. He traveled a lot for his work, he worked in the sugar industry, we went a lot to El Salvador, Guatemala, Costa Rica, in all those countries he said that I played the guitar and that I liked to sing and he told me “sing” and I sang. I liked to see how people liked it, from other countries who liked my music.”

Like other Cubans, Ángela left the island in 1962 after the triumph of the Revolution. Due to migration problems he had to send his children to the US alone, as part of the so-called Operation Peter Pan, carried out by the US government with the support of the Catholic Church, in which 14,000 unaccompanied Cuban children went to the United States and Spain.

For this reason, without having the resources to claim her children legally, it took Ángela a long time to be fully reunited with her family. “It was a very strong thing because I never really thought of sending them alone”Álvarez pointed out in the same interview.

The woman began to write songs, such as Love, Little piece of sky Y She is so pretty, in which he slipped his longing for his beloved Cuba. Despite the fact that over the years she dedicated herself to other tasks, she continued to write from time to time, but she did not have someone to help her record a record. That, until her grandson Carlos, who is a professional musician, took her step.

Carlos had been waiting for the perfect moment to record his grandmother’s album for years, until a friend in Spain told him “are you waiting for me to die?”, he recalled. There he understood that he had to do it without further ado. “That was the moment that beat me.” he told the AP. “He told me ‘there’s not going to be a perfect time, you have to do it now’”.

Carlos traveled to Los Angeles and called her to tell her that they would record their album on the West Coast. “Oh but Carlos, a trip from here to Los Angeles is like a trip to the moon!” her grandmother pointed out. At first they conceived it as a more intimate and familiar project to preserve the songs written by Ángela. A dozen musicians participated, including José Álvarez, father of Carlos and son of Ángela.

Listening to the material, they understood that they had something valuable. “We realized that we had to share it with the world, this was much bigger than a family project, because… the courage he had to do it at his age was inspiring for everyone,” said Carlos. “She belongs to the world, we have to get this out there and share it.”

He won the Grammy for Best New Artist at 95: the story of Ángela Álvarez – La Tercera

LIVE. The winners of the Latin Grammy 2021
Cumbia with airs from A Coruña at the Grammys
Cubans of the Year 2022, the selection of personalities of Diario de Cuba - EFE Comunica
Tweet
Share
Share
Pin
Other links: https://awardworld.net/resources/