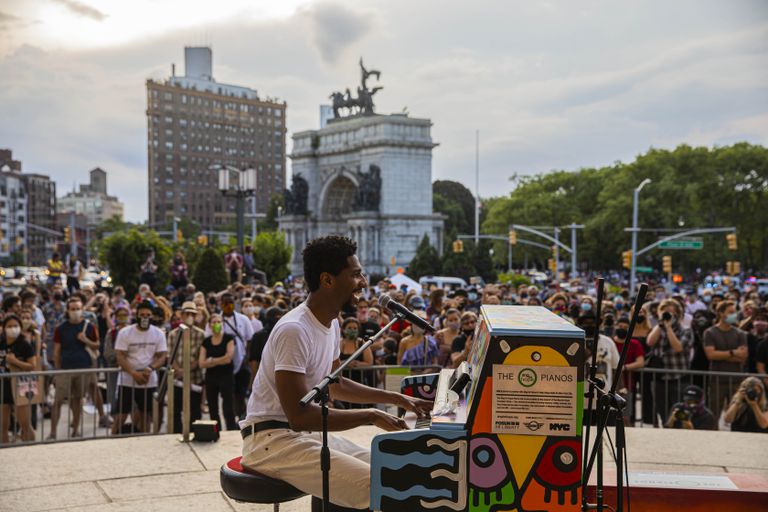 It’s early morning in Harlem, New York. Jon Batiste aims for the stars with his melodic, an instrument that mixes keyboard and harmonica that he never lets go of. March through the streets with Madonna. The artist, who now calls herself Madame X for her new album and documentary, chose the best partner. Batiste makes a cult of these musical walks, he calls them revolts of love, social music. For years he has been walking the streets with his band Stay Human, which he conducts every night in the popular Late night show by Stephen Colbert, where he gained great recognition in the United States.

Charismatic, with a huge smile and explosive laughs reminiscent of Louis Armstrong, New Orleans’ new big star was cradled by jazz. From the age of seven he went to clubs to learn from the greats and later he landed in New York to refine his piano practice at the prestigious Juilliard school. Batiste, 18, played on the subway and now harvest awards such as the Oscar and the Golden Globe, among others, for the soundtrack of Soul (Pixar, 2020). It is also the artist with the most nominations (eleven!) to the next Grammys, which will be delivered on Monday the 31st of this month.

Like roots drowning in the swamps of his native Louisiana, Batiste’s story emerges from a family tree of musicians. “It is normal in New Orleans to have a family that is musical. The rhythm of New Orleans is a mixture of Afro, Latin, funk, hip hop… There are so many types of black rhythms: Creole music, secular music, that of street parades ”, says Batiste, who composes mixing all these styles to offer an eclectic show. Right now he is preparing the American Symphony with more than 200 musicians that would premiere next year at Carnegie Hall. Batiste and his black orchestra, in one of the most renowned concert venues in the world, the most prestigious in New York. For the 35-year-old performer and dancer, surprise, spontaneity and empathy with the audience is key. You want to move them to tears or make them jump for joy. On the streets of New York, by the hand of Madonna singing “Like a Prayer”, or on Colbert’s television nights. It’s all part of the same: music as a spiritual practice.

In a talk with LA NACION magazine, He says that a few hours ago he played for more than 60 thousand people in Central Park. “It was the first time after two years,” he says in a calm voice, as if he had been woken up by the call or interrupted while he was meditating. Or prayed. Because Batiste is a deeply religious man. For the virtuoso pianist, recitals are spiritual practices and the songs he composes are sent by God. When he went up to receive the Oscar for the film Soul (2020), the first thing he said was: “God gave us twelve notes, they are the same twelve notes that Duke Ellington had, that Bach and Nina Simone had.”

At the Oscars, you said it took a combination of miracles to get you there. Could you name three of those miracles for me?

The survival of the black population in the United States, the gift of music and of all my family and friends.

For Soul They had to study your hands and your playing, so the notes that Joe, the main character, plays in the film are yours. How was your reaction the first time you saw her?

It was beautiful. I cried. It was very emotional. I felt like I was in the right place at the right time. Working with Pixar was an extreme collaboration experience. They all did more than they were called to do. There are moments in history when the words that Joe Gardner, the protagonist, says are my own words. It was very beautiful how everything came together. Director Pete Docter is a genius. We got along really well then and became close friends. Like a chosen family.

You worked with Spike Lee and on the show Treme, from HBO, in addition to Soul. Are you tempted with a future film project or series?

Oh my gosh, I hope so. I look forward to directing and acting. Right now I’m working on the biopic of a well-known musician, creative, artist and businessman.

Who is it about?

I’m going to personify it. It is very well known, but I cannot say it yet.

Nina Simone said that it was the artist’s job to refer to reality. When did you feel the urge to commit to what was happening in your country?

You were a leader on the streets of New York in the Black Lives Matter protest. How did you feel?

It was a historic day in a historic time that I think we will talk about many decades from now. There were so many people and I was leading a march of ten thousand people. There was so much energy. People want to feel like they can change the world.

What is the most important attribute in a leader?

Serve those who follow you. If you find a way to empower and enhance those around you and work for you, then what you create is something that everyone excels at. Not only you. A good musician makes the whole band sound amazing. It’s like Michael Jordan in a basketball game. That is the mark of a good leader.

Do you think there is the possibility of a real change in the consciousness of the younger generations?

I think it is possible, but for that we must know the truth of who we are. And that is something difficult to face.

How much of your personal history is reflected in the way you play the piano?

Everything. Who I am is who is playing. You cannot do more or less than you are as a human being. If it’s not inside of you, it’s not going to come out of your instrument. It is the only way that it works. You have to have it inside of you so that it can come out.

When was the first time you realized you had it?

I am discovering it every day. Every day I discover more and more of what I have.

You worked in hospitals under the belief that music is therapeutic. How does healing work?

I believe that music is a spiritual language, just as the language of mathematics is obviously scientific. There is the question of how sound and vibrations travel. At the same time, there is the emotional aspect. There is a way in which you can speak the universal truth of God through music. Music is a spiritual practice. It is like a prayer. You are praying and God is listening to you or you can pray with other people. When people feel divine spirit and intention through your music, it changes their whole being and the way they feel and think. Change how they act and change the world. Whenever we play there are certain moments that are incredible.

You meditate every morning before starting the day. Is it a way to nourish yourself?

It is a way of connecting with God and being present with what he wants you to do. The spirit of truth and wisdom guides you. You just have to listen to it. It’s like a conversation you have with a friend. If you talk to him every day, the relationship grows. Sometimes you see relationships of many years between people that just by looking at each other and they understand each other. They connect telepathically. This is my relationship with the spirit of truth. It is a way of flowing.

When was the first time you fell in love with music?

When I was very young and then I fell in love again when I was a teenager. I fall in love with music every eight years, we can say. [risas]

You mentioned your father as your musical mentor. What was the most important lesson he taught you?

He told me to study the masters deeply and then try to be better than them.

It is often said that art is a window to the truth, what is the truth that you want to illuminate?

The best thing about art is that it allows us to express our truth. God controls the world and created us. If we understand that this is who we are, many would change their behavior.

How did this pandemic affect you? What aspects changed for you?

I still don’t know and you have to live long to know. I’m still processing this, because we’re still in the middle. I just got back from doing a recital for 60 thousand people in Central Park.

How did you feel?

It was incredible, but we had to do so many tests to get on stage … And there is too much to do before we return to what we consider normal.

How is the creative process to write a song as emotional as “Cry”?

I do not believe that a song can be written, but that it is sent to you by the divine. It’s one of those things that feels like they’re already there. You are only discovering it. I love to create. It is a way of shaping the world around us. Of course there are different ways to do it. By raising your child and educating him, you are shaping your world. Or by building a basketball court for a community center.

You are considered a musical archaeologist. You like to dig into the past and then mix different times and rhythms like in “I need you”, from your new album We are. What is your favorite era and sound?

I like anything that feels like a counterculture. And I especially like discovering things that are not in the mainstream and reinventing them in a way that creates their own sound, rather than following a certain trend.

Are you familiar with the music of the Argentine Astor Piazzolla?

Yes. I love Piazzolla. I remember the first time I learned his music on the accordion. It’s something we play in the cajun music of Louisiana. There I thought that the beauty of humanity is that we are all connected. It was incredible to find these familiarities in the different music. Understand how great Piazzolla was as a composer. Piazzolla is like the Beethoven of Argentina.

Are you also on the lookout for new sounds and talents that appear?

Yes, I take from all styles. I love jazz because there are many musicians who are very talented. Between jazz and gospel are some of the most naturally talented musicians I have ever listened to.

If you had the chance to dine with one of the geniuses of jazz, who would it be and what would you ask him?

Probably with Duke Ellington, and I’d ask him how he achieved the result that he did. How he got the band and the music to sound like this.

And do you think she would reveal her secret to you?

I think that, as in any conversation with the people you love, even if they don’t tell you, they show it to you. If you look at it and listen carefully, the answer is there even if it doesn’t give it to you.

Jon Batiste. The 35-year-old musician and dancer who leads the nominations of the next Grammys, with 11 nominations