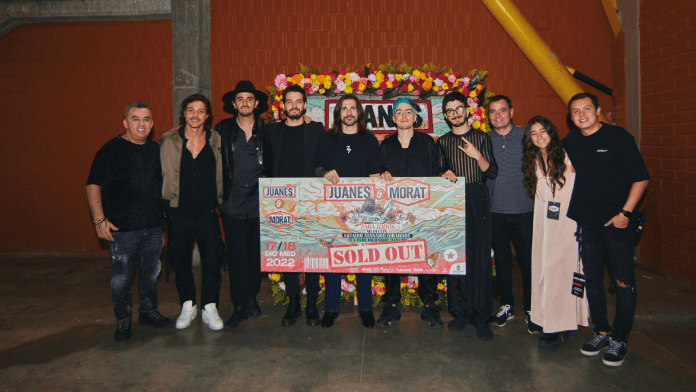 “Playing in Medellín with Juanes It is not only a dream to play with him, but also because it is a dream to return to the city” MORAT

The Atanasio Girardot Stadium was the setting where both artists prepared a special show for their fans in Colombia. Both artists close their 2022 world tours with these SOLD OUT nights. Colombia celebrated itself this weekend. Two memorable concerts that close a year full of triumphs for both artists. For the first time together on stage, JUANES Y MORAT made the more than 70,000 attendees vibrate by singing hits like “Besos en Guerra” at the top of their lungs, their most recent release together “506” and “La Tierra.”

JUANES, who will release his new album in 2023, presented his first single “Amores Prohibidos” to the public, giving a sample of what his album will be like, and demonstrating why he is the greatest exponent of pop/rock in Latin America. The paisa made an impressive journey through genres such as pop, rock, reggae, merengue and salsa, among others, impeccably playing his electric guitar and accompanied by his band, he paid tribute to his friends and teachers, he made all to the rhythm of “Bilirubina” by Juan Luis Guerra, and continued with “Don’t hit the black girl” by Joe Arroyo.

Morat went back on stage to perform together the emblematic song “La Tierra”, JUANES also remembered his beginnings in
Ekhymosos singing “Solo” and amazed with his artistic ability with the song “Enter Sadman” by Metallica. The winner of more than 26 Latin Grammys returned home with an unforgettable show that united generations and families.

JUANES AND MORAT were together on a tremendous stage, the largest that has been set up in the Atanasio Girardot Stadium, with a height of 26 meters and a mouth of 28 meters. More than 680 meters of side and internal LED screens and more than 450 moving heads. a stage
world class with an audio system that allowed the experience to be homogeneous for all attendees.

MORAT began a magical night singing together with JUANES their latest hit together “506” and the already well-known song “Besos En Guerra”. the public went crazy during the 80 minutes that the band was on stage performing the best of their musical career. The thousands of attendees joined in a single voice with love songs such as “Cuando nadie ve” “How dare you” “No se va” and a couple of surprises that they had for the public, the first by inviting Andrés Cepeda to the stage to sing accompanied by the piano “My nightmare” and the second, to include Feid in their show with whom they performed their hit “Stay alive”.

These two nights in Medellín closed a year in which more than 500,000 people attended their SI YESTERDAY WAS TODAY WORLD TOUR, one of the most important tours on the international scene and which took place in more than 20 countries. His latest album was released six weeks ago and has topped the sales charts throughout the Spanish-speaking scene. With this they managed to be the first Spanish Pop Band on Spotify Global.

READ ALSO: Origin: the coffee fair that brings together coffee growers from Antioquia

“To play in Medellín with Juanes is not only a dream to play with him, but also because it is a dream to return to the city” MORAT

For his part, JUANES made Medellín vibrate with his usual hits such as “Mala Gente”, “La Camisa Negra”, “A Dios le pido”, “Nada valgo sin tu amor”, “Volverte a ver” and “Fotografía”. the latter performed alongside ANTONIA JONES on Saturday and GALE on Sunday, new artists who are being formed in the seedbed of their ONE-S record label. Antonia, is an artist from Medellín, with a deep and unique voice, who in 2023 will release her first album full of organic and acoustic sounds but at the same time modern and innovative, with lyrics written by her, showing the essence and musical maturity her.

GALE, is a Puerto Rican singer and songwriter with an innate talent, born into a family of musicians and with experience in musical theater, which contributes to her overwhelming stage and artistic presence.

A stadium with a full house and where its more than 70,000 attendees chanted together all the songs of both JUANES and MORAT, he took it for granted that music unites generations and is a universal language. Young people, children and their parents and adults enjoyed and made magical nights overflowing with talent.

“I will never have enough words to thank Medellín for these two nights, they have given me the best gift of all. Welcome MORAT always home” JUANES

Sunday was a special date, the Atanasio Girardot was full of families with their children who enjoyed the surprises of JUANES and his usual friends. Carlos Vives was invited on stage to sing “La Gota Fría” and Fonseca went up to the rhythm of the accordion to interpret with JUANES “Without measuring distances”, to the sound of vallenato, children, youth and adults lived a fascinating experience.

JUANES and MORAT close their tours in 2023 in a unique way, with the best public, that of Medellín and this is how they express it:

“…I’m still looking for words for what we saw and experienced. It’s a chameleon. And every fur of hers is genuine. Only he can make a setlist like this where each song is an applause and a strong and different feeling. An impeccable and forceful show” Juan Mosquera “Last night was beautiful, I felt very proud to be Colombian, of my roots, my culture, my home and the artists that represent it. I had a trip back in time, my beginnings with Polygamy and Ekhymosis, I went through my life until Morat. Thank you for such a beautiful concert” Vanessa Alba

Do you want to contribute to the expansion and consolidation of 360 radio?

I want to help

Juanes and Morat: more than 70 thousand people enjoyed the iconic show this weekend in Medellín – 360 Radio

Tico Óscar Marín won his fourth Latin Grammy: 'we are very happy'
Who is the Spanish artist with the most Latin Grammy awards?
Zoe Gotusso goes out of her element and reaches the Latin Grammy
Tweet
Share
Share
Pin
Other links: https://awardworld.net/resources/