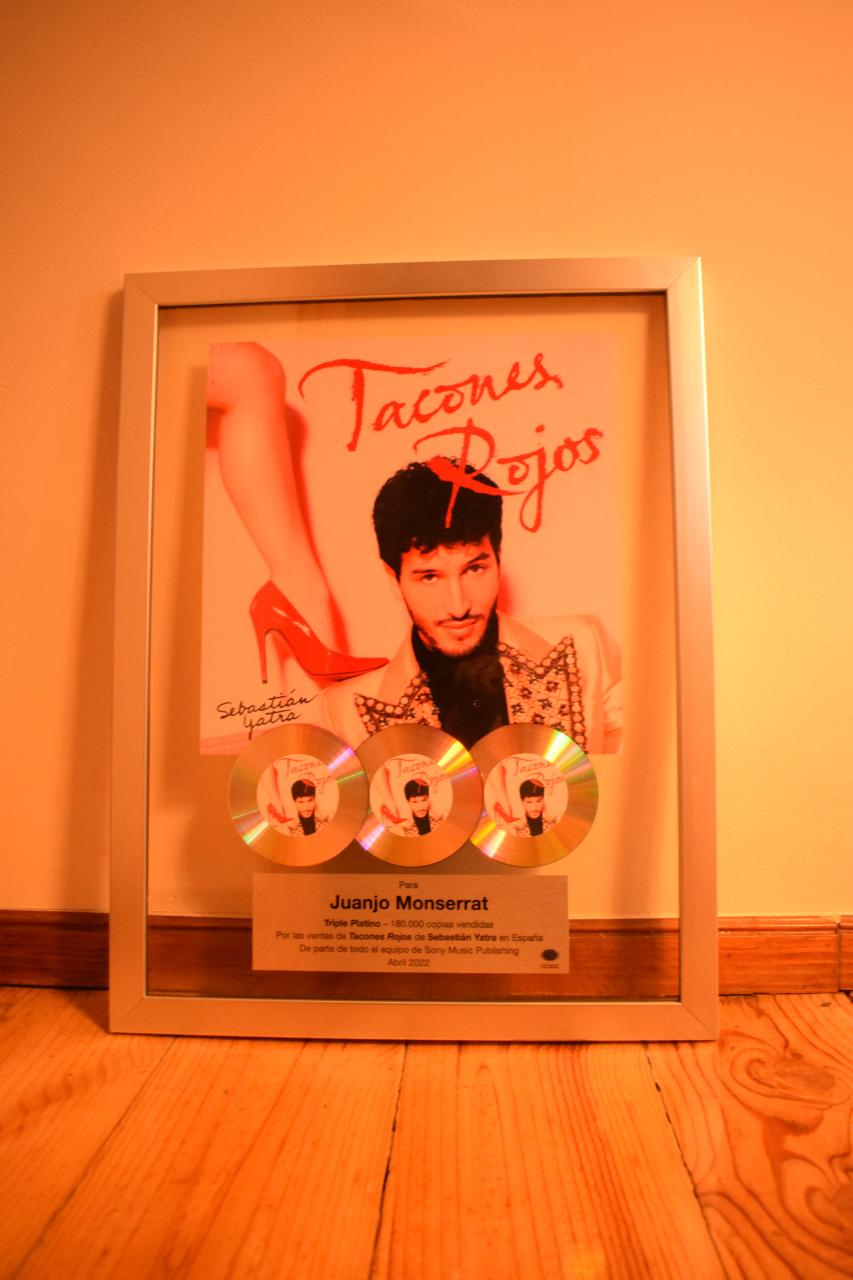 In the heart of Madrid, on Calle Jaime el Conquistador, wait Juanjo Monserrat An important package arrives at your house. In it must go not one, but two Grammys. The first, as co-author of Red high heelsthe successful theme that he signs together with Sebastian Yatra. The other, for the disk Dharma, also with the Colombian. Juanjo is the first Mallorcan to win such awards in a double way and, for achieving such a feat, the street in which he has decided to start his new life could not be more successful. But all this, although exciting, is past, and what Juanjo has is, above all, the future. Without going any further, on December 9 he releases a new album, more than friendsin which he plays with people like Tomeu Penya and that it is a way to “keep one’s feet in Mallorca”, although their aspirations have long exceeded the Island.

For the interview, Juanjo sits in his work chair, where he plays and composes. His house is a kind of sanctuary for what he has done so far. There are several ottomans by the passage of him in Got Talentnewspaper clippings or a gold record for tomorrow, from the Korean group TVXQ! that he achieved in Japan – a country in which he is famous and for which Joan Bover has made the documentary ottomaniki. It is, therefore, a temple to his music, the kind that accompanies him since he was a child, when he was three years old “he already played in front of the people in the square.” And it is that Juanjo comes from a family of musicians. His mother sang in Big Band Orchid and went his grandfather’s guitar the first one that he took to, in a self-taught way, learn in his room by ear the melodies of his favorite games, such as final fantasy 8. A path that starts in S’Arenal and has led him, for now, to conquer Las Vegas.

But such is the success of Red high heels that even the platinum record that he has on the shelf has expired and he waits for the new one to be sent to him, in which it already appears as a gold record. Such success, he says, made them go “very confident” to Las Vegas, where the gala of the Latin Grammys 2022. “It’s something I’ve never even thought about. It is even funny to me because I have nothing to do with this world and I have won two », she admits happily.

The emotion, however, was as if it had followed him all his life: «I did not hear anything Yatra said when he went on stage. I only thought about how proud my family, my partner and my land would be, Majorca. My head was flying.” It was the recognition of a theme that has sounded –and still sounds– everywhere. “It’s surreal,” he comments and assures that he is still not used to something that he has done “is everywhere.” In fact, at the Grammys, Yatra played an English version with John Legend in which “they made arrangements, but they respected my chords, my bass line, and it’s amazing to see that the ideas I thought of in my house in Palma are being played in Las Vegas by a great band”. In any case, Juanjo can’t get enough of her and, in fact, there was no better reception in America than “arriving at the airport and having it sound over the public address system. I’m lovin ‘it. He is like a son to me.”

Now, however, it is time to look forward. “I want 2023 to be the year he finds out where I want to go. Produce and compose more from my studio, in my house », she wishes. She recently signed with Sony and has worked with them ever since, collaborating with Becky G or David Bisbal and Álvaro Soler, with whom he has pending issues to bring up. Despite this, the tour in which she participates with the Mallorcan rapper Relays B It has prevented him from “having a routine”, something that is added to the “flexibility of the profession”. On this, he says: “If I had office hours to be at my position at 9 or they fired me, don’t worry, I’ll be there, but in my life it’s hard to put that order together because the elements don’t ask me to.” Therefore, he hopes to achieve “more stability.”

The first step of that new life is more than friends, which he presents on December 16. «It is the music that I like to listen to and do. The Latina is very good, but this one is reserved for me ». She is special for “having nothing to do with what I do with other artists” and, in fact, it is so personal that she describes it clearly: “My partner calls it ‘Juanjo’s music,'” she says with a laugh. .

Much of that “Juanjo music”, in fact, was created in 2019, “the best year of my life on a personal level.” It was when he moved to Palma, went on tour to Japan and, among other things, “I was reborn,” he says. The day to day has delayed the release of the album, but, on the other hand, “a side effect is having won the Grammys, so it’s not bad.” 2022 competes with 2019 as his best year, but according to him the difference is clear: “2022 is my best professional year, but 2019 is the best of my life.”

“I have never believed in those who say that music is their life”, confesses the Mallorcan, although he assures that now he thinks that “I carry it inside”. «At three years old he cried with I will always love you even though I didn’t know anything about music or English and it’s because for me music is like a code, like the alphabet or the colors”, a way of seeing the world. It is not her life, perhaps, but she is dedicated to her and she is returning that dedication. And it all started in her room, with a teenager learning to play the guitar. “I think it’s something that comes before birth,” he says, so in a way it was predestined and it was a matter of time before the music that runs through his veins gave him everything he is living.

Lost cell phones, crystal-studded jackets, and a Tiffany’s medal: The Journey to America

Juanjo Monserrat, from learning to play the guitar by ear to winning the Grammy

The great musical moments we have enjoyed this 2022
Fans ask Piqué to return the Grammys to Shakira: "Put the golden balls you don't have"
Paloma Mami in the prelude to the Latin Grammy: “I don't care what people think about how I look” - ...
Tweet
Share
Share
Pin
Other links: https://awardworld.net/resources/