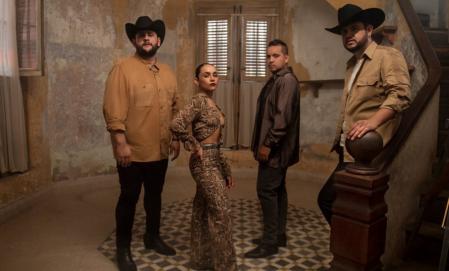 Matissea group made up of paul precious, Roman Torres Y Melissa Robleshave been accompanying their fans for eight years through their pop music and a style that is characterized by being romantic and even a little melancholic.

In September 2021, the band was encouraged to venture into the regional Mexican genre with “Like I did”; This step was easy for them, because in a certain way “they carry it in their blood” according to Román, being from the north of the country, as children in their environment they could listen to banda music and related genres, so in some way ” it stuck to them.”

“We had never dared to make a song in that genre,” reflects the singer, “because the one we did won a Grammy.” In the last edition of the Latin Grammys, the band won its first prize at this ceremony in the Regional Mexican Song category, something that Melissa assures is very satisfied.

On the other hand, Torres ruled out the idea that it was something very complicated to carry out this gender leap, because although “there are doubts about what people are going to think”, their fear quickly passed since “they really liked the song”.

According to Pablo, it was “the desire and the little tickle” that mainly prompted them to create the single. “We have to confess that when we wanted to release the song, we knew we had to do it with someone,” said Preciado, “alone, the transition might have been very abrupt.”

The interpreter also recalled the reaction after discovering the final result of the song already with the voice of Carin León: “We sent them to our comrades, as no one said ‘ah it’s weird’. We are our first sensors, we know when something sounds forced.”

Although there have been some unsuccessful attempts when combining Matisse’s style with other genres, such as when he sought to include “More than friends” a ska version. For Román Torres, these types of situations are “part of trying out” and that sometimes what a person likes is not what they have left, so he is grateful that the group is very clear about what does fit into both items.

Currently, the group continues to experiment from “their interpretation of the genre” with the Sinaloan band in the new single with Eden Muñoz, “You’re worth mother”slowly with music that they enjoy.

This new song, which maintains Matisse’s signature ballad style, is, according to vocalist Melissa, a Friday or Saturday afternoon: “I wouldn’t have it for breakfast because I would end up crying in my coffee and we don’t want that.”.

It seems that, for the moment, the group is in a great moment full of musical experimentation and success, because in February they will light up the National Auditorium with their music.

Read more about our musical notes

K-pop: ranking of the 10 most listened to songs today on iTunes Colombia
K-pop songs on iTunes Argentina to play today
Latin Grammy 2021: ANIA was a special guest at Rubén Blades ceremony where she was honored
Tweet
Share
Share
Pin
Other links: https://awardworld.net/resources/