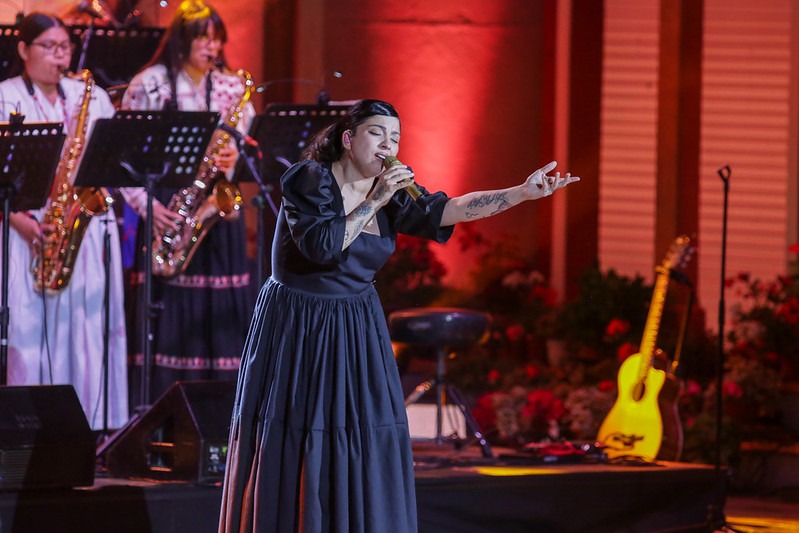 Accompanied by a musical group of Mexican women, she brought all of El Patagual from emotion to dance

OLMUE 2023.- The first night of the Olmué Festival has been full of emotions. And it is that there are 2 years of restrictions due to the pandemic, those that passed so that the contest that rescues traditions and national folklore returned in glory and majesty to the El Patagual amphitheater and to the screens of millions of homes.

SEE ALSO: The activities programmed around the Olmué Festival

The opening night of this Thursday of the Fifty-second Festival of the Huaso de Olmué, had an impeccable overture, with typical dances that represented a huasa wedding, by the National Folkloric Ballet (BAFONA).

Then came the time for the traditional kiss from the event’s entertainers, Ivette Vergara and Eduardo Fuentes, who in a joyous “piquito” consented to the request of the audience; The same public that minutes later raised their voices demanding the presence of the queen of the night, Mon Laferte.

Almost 30 minutes of transmission had passed when they finally gave the pass to the viñamarina winner of 4 Latin Grammys. Nearly 50 women musicians were waiting for him on stage, coming from different cities in the State of Oaxaca, Mexico, belonging to the musical band “Mujeres de Viento Florido”.

“They are incredible, wonderful women. I can’t believe they’re here and it’s the first time we’ve played a full concert together. In February we are going to have a concert in New York, but this is the premiere, it is the first time that we are together, “said Mon in the middle of the show.

In an impeccable interpretation, the artist began a tour of emblematic songs from her albums, such as “La Trenza”, “El Cristal”, “Yo te qui” and the most recent “Te Ví”; and then play the theme “Se va la vida”, which he composed after a visit to women inmates at the Valparaíso Prison. Another moment of maximum feeling came when together with the voice of one of the Women of the flowery windthey interpreted the “Song Without Fear”, one of the musical hymns of feminism, by the Mexican composer Vivir Quintana; which was also chanted by the women of El Patagual.

Another special moment that the artist offered occurred when she invited two Chilean women singers to the stage. This is the 92-year-old folklorist “Chabelita” Fuentes and singer La Chinganera, who accompanied Mon in the interpretation of the tune “La Enagüita”

Then “El Patagual” stood up to dance with the singer from Viña Mar, who made everyone vibrate with songs like “Pla-ta-ta” and “Amárrame”, which even led to a “little train” in the first rows of the amphitheater. Then came the recognition of the entertainers to the interpreter, that she offered one last song, one of the ones that catapulted her to her success and could not be missing on the huasa night. It was so that with “Your lack of love”, Mon Laferte said goodbye to El Patagual, amid shouts and applause.

Mon Laferte after a month in Chile: “Many things marked me”

These are the traffic cuts for the Olmué Festival

Mon Laferte shone on the first night of the Olmué Festival