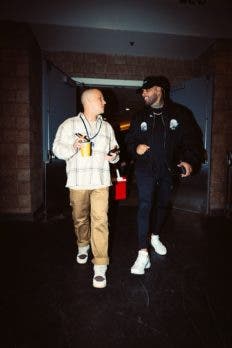 The Latin GRAMMY Cultural Foundation®is pleased to announce that Nicky Jam, winner of the Latin GRAMMY®will sponsor the prestigious Prodigy Scholarship for an undergraduate degree at Berklee College of Music beginning in the fall 2023 semester.

The announcement of the scholarship is made after the performance of the artist, along with scholarship recipients from the Foundation, during the 23rd.a Annual Latin GRAMMY Awards®in which he pledged to support students who aspire to be musicians.

“Music has always been there for me; It has been the drive that has kept me going through the most difficult times of my life,” he said. nicky jam. “By offering the Prodigy Scholarship with the Latin GRAMMY Cultural Foundation, I have the opportunity to share my passion for music and help the next generation of Latin music creators in their efforts to achieve their dreams.”

“When it comes to pursuing a music career, finances shouldn’t be an impediment to nurturing talent,” he said. Raquel “Rocky” Egusquiza, Executive Director of the Latin GRAMMY Cultural Foundation. “We are very grateful for the generosity of Nicky Jam, who makes music education a reality for future generations of Latin music creators and preserves our legacy for posterity.”

Additionally, starting today, the Foundation will be accepting applications for all 2023 scholarships, and along with Nicky Jam, Juan Diego MedinaCEO of La Industria Inc., will also contribute by sponsoring one of the Tuition Talent Scholarships of up to $100,000.

All scholarships are available to music students between the ages of 17 and 25, according to the following:

· Three (3) Talent Scholarships for Tuition of up to $100,000 each, will be awarded to students toward the cost of a four-year music degree beginning in the fall of 2023 at the university of their choice.

Each year the Foundation’s Scholarship Committee carefully reviews applications from a highly competitive group of aspiring musicians, based on diverse abilities and rigorous requirements, both academic and artistic. To date, the Foundation has awarded more than $7.6 million in scholarships, grants, and musical instrument donations through its educational programs and events around the world. All scholarships are awarded to music students with exceptional talent, and financial need, to support their educational and musical aspirations.

To apply, visit www.latingrammyculturalfoundation.org. The application process requires students to submit two audition videos, two letters of recommendation, one letter of acceptance from an accredited university, and two essays. Materials can be presented in English, Spanish or Portuguese. The deadline to apply is April 10, 2023 at 11:59 pm (US Eastern Time).

For more information and the latest news, please visit the official website of the Latin GRAMMY Cultural Foundation, www.latingrammyculturalfoundation.org. If after reading the rules you have any questions and need help with your application, please write to us at [email protected]

Nick Rivera Caminero, known as Nicky Jam, is an idol of the urban genre of Latin music. The Puerto Rican singer’s unique perspective made him a pioneer of reggaeton at the turn of the century and throughout the past decade, helping the genre become a worldwide phenomenon. The Latin GRAMMY winner continues to cultivate hits with multi-platinum songs and sell-out world tours, all of which contribute to his inspiring legacy.

At the age of 11, Nicky Jam broke into the world of reggaeton in Puerto Rico with his first album, Different from others. During adolescence, she was a rising star of the genre with hits like “I am not your husband”, “I am going to the party”, “Fiel a tu piel” and “La combi completa”. She was also part of the duo Los Cangris along with another musical pioneer, Daddy Yankee. Soon after, however, jail time and a deep depression derailed Nicky Jam’s career.

Three years later, he moved to Colombia with a renewed desire to recover his career. After being absent from the popularity charts for 10 years, Nicky Jam returned with “Travesuras,” which charted on Billboard’s Hot Latin Songs chart for more than 20 weeks in 2014. The following year he achieved another worldwide hit, “El perdón,” with Enrique Iglesias, who won the Latin GRAMMY for Best Urban Performance. He achieved the biggest hit of 2016 with “Hasta el amanecer”. The songs were part of his comeback album, Phoenix,in 2017, to which the renewed international interest in reggaeton is attributed.

Nicky Jam’s songs have been streamed more than 14.5 billion times on YouTube and 1.1 billion times on Spotify. Among his most recent hits are “X,” with J Balvin, who has gone platinum 35 times, and “Te boté,” along with Casper Mágico, Nio García, Darell, Bad Bunny and Ozuna. In 2019, Nicky Jam made his inspiring story into a hit series, The winner, in which he also starred. She debuted on the big screen with Bad Boys For Life side by side with Will Smith and Martin Lawrence.

ABOUT THE LATIN GRAMMY CULTURAL FOUNDATION:
The Latin GRAMMY Cultural Foundation® is a 501(c)(3) charitable organization established by The Latin Recording Academy® in 2014 to increase international interest and appreciation of the significant contributions of Latin music and its creators to world culture. The Foundation offers college scholarships, educational programs, and grants to support the research and preservation of his rich musical legacy, and to date has donated more than $7.6 million with the support of Latin Academy members, artists, corporate sponsors, and others. generous donors. For more information or to make a donation, please visit latingrammyculturalfoundation.org, amazon smile or our Facebook page. Also, follow us @latingrammyfdn on Twitter and Instagram, and the Latin GRAMMY Cultural Foundation on Facebook.

Bolivian after the Grammy: "The third was the charm"
The Acoustic Sessions of the Latin Grammy 2022 will begin with a Mexican accent
The Latin Grammys elevate the anthem against Castroism "Patria y vida"
Tweet
Share
Share
Pin
Other links: https://awardworld.net/resources/