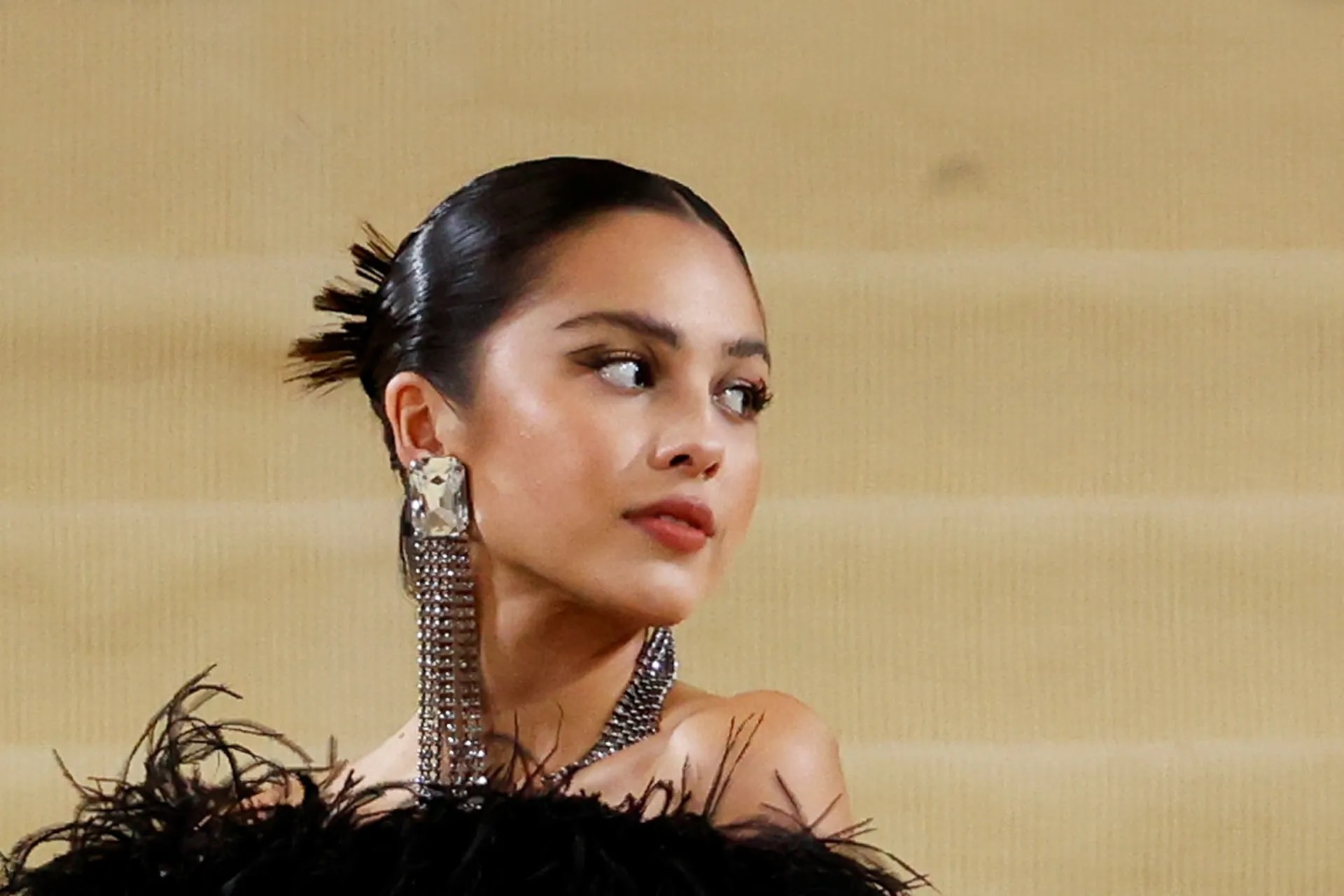 “I got my driver’s license last week like we’ve always talked about, because you were so excited for me, because I was finally going to be able to drive home,” she sings. Olivia Rodrigo on the subject that changed his life: the hit “Drivers License” that he released in January 2021, four months before the release of SOUR, that album marked by adolescent angst represented by that short and powerful word, like the album itself.

That common thread represented in the possibility of driving and adapting to different paths and directions, is also embodied in Olivia Rodrigo: driving home 2 u (SOUR: The Movie), the feature film that premieres this Friday by Disney+.

There we see the artist of Filipino descent, on her father’s side, and German and Irish descent on her mother’s side, as the exclusive protagonist of a roadtrip in which he travels and revisits all the scenarios in which SOUR it was taking shape.

The film not only appeals to renew the musical and stylistic concept of the album -The artist had done the same thing when she promoted it with the concert for YouTube, sour prom– through presentations in which the brand new arrangements are notorious, as in the case of “Good U 4″, but also through reconnect, now with another look, with all those spaces in which he conceived, together with the composer and producer Dan Nigro, his successful album.

From Salt Lake City, Utah, where the writing process began, to Los Angeles, California, The singer travels and stays in different hotels, on a journey in which her songs are played in the Mojave Airplane Boneyard, at Roy’s Motel & Café, and in the imposing Red Rock Canyon, among other meticulously chosen locations.

The film, directed by Stacey Lee, has small interventions by artists such as Jacob Collier, Blu DeTiger and Towa Bird.and few, but interesting, archive images of Rodrigo and Nigro in the recording sessions in which you can see how they were making key decisions regarding the structure of SOUR.

However, the focus of the work is placed entirely on that introspective journey. At this point, Olivia represents a paradox. She can be seen to be very shy in her voiceover statements about what it was like to play the pinnacle of pop and emancipate from High School Musical: The Musical, but when interpreting his most grunge songs like those great anthems of anger teen due to the incomprehension of the adult world, the brilliant “Brutal” and “Jealousy, Jealousy”, shows all his strength, his confidence as an artist and his attempt to detach himself from the inevitable references to artists like Florence & The Machine, Paramore, Lorde and Taylor Swift (whom he even samples on “1 Step Forward, 3 Steps Back”).

Within the framework of the presentation of the film and ahead of the Grammy Awards ceremony that will take place on Sunday, April 3 in Las Vegas, where is nominated in seven categories (including Album of the Year, Record of the Year and Song of the Year for “Drivers License”), Rodrigo spoke via Zoom with LA NACION.

From how she composed her album, the little promotion she had, and that lo-fi touch of her videos, which Olivia has been cultivating, if you will, another contradiction: that of presenting in an intimate context a film that accompanies one of the most resounding albums of recent years, an elusive way of presenting itself, once again, to the entire world.

In “Favorite Crime”, one of the themes of SOUR, Rodrigo speaks of lack of love and describes it as “a broken heart”, but with “four bloody hands”. On driving home 2 U He explains that this concept came after a process of wanting to stop looking for someone to blame for his sadness, and make a mea culpa, including himself in the equation.

The singer does not name her ex-partner and colleague in High School Musical, Joshua Bassett, but the clues are there. “This album is very special because I wrote it during a time in my adolescence when I was experimenting, all the feelings were new to me, many of them I was experiencing for the first time”, says Rodrigo.

“Writing was my way of processing all those emotions. Already on a personal level it was very important, but after editing it and people responding so positively, I took that as a great blessing”, he adds while behind you can see a huge piano, a strong contrast to those melodicas that they abound in his videos and in his film.

When asked what it was like to process that overwhelming reception it got SOUR, living proof that there was a youth audience looking for material to let off steam but also a more adult one that celebrated this veiled tribute to great pop and punk artists, Rodrigo assures that she never felt like a normal teenager.

“My life was always very strange,” he confesses. “Even before I was a celebrity I was always the center of attention, I was homeschooled from a very young age and I am an only child., I always liked to sing and I’ve been writing for as long as I can remember, my parents have videos in which I sang my songs, in some I said nonsense (laughs). It was always like that, only now people see it in a different way, which is really exciting, I’m very grateful that I can write songs and that people want to hear me sing them, and the goal of making this documentary was to give my fans a piece with contentalso for those who couldn’t attend my concerts, I just wanted to re-imagine my songs and talk about what it was like to make them”.

Indeed, in the Disney + film, one perceives Rodrigo enjoying that resignification, especially when he interprets the final theme of SOUR, “Hope Ur OK”, which is split from leitmotiv of the album, and imprints an optimism from the visual, on a beach, and surrounded by her band.

“This movie made me very nostalgic, seeing the early stages of the songs and how they now have a totally different meaning and have come to life in a completely different way. It’s great to look back and see those memories, the times when I was writing the songs, it was very special to me.” says the singer, whom in her film, in one of her first performances, we find her in a house where his band, made up almost entirely of womenis presented in an effective sequence shot.

“I love working with women, I believe that friendship between women is the most satisfying relationship in the world”, he remarks and adds: “It was a lot of fun doing all these songs with them, especially the rockier ones. I remember growing up and not seeing many women doing rock, in relation to the number of men in the genre, so I wanted to include that in the film as well, and then carry it over to my tour.”

After his show at the Grammys, Rodrigo will continue his extensive tour with singer-songwriters Gracie Abrams, Holly Humberstone and Baby Queen, which will conclude on July 7 in London. In dialogue with THE NATION, came the inevitable question. What are the chances of your visit to our country? “It makes me very sad that I won’t be able to go to all the places I want to go on this tour, but I’m so happy because I’ll be able to visit them on the next one,” she reveals.

Oh yeah, I’d love to go! Like I said, I can’t go to all the places I would like to on this tour, unfortunately., but I’m really looking forward to getting to all the places I want the next time I go on tour. I’m so anxious to do it, right now I’m with the rehearsals, but the exciting thing is the comprehensive experience, delivering a very good show on a sound and visual level, from choosing the outfits even so many other details that are part of this tour. All my friends are already advising me on how to take care of myself on the road, you travel a lot, performing every night can get physically exhausting when you do it so often, so the advice is that I sleep a lot, and that I eat well.

For its part, Rodrigo has a piece of advice for emerging artists. “I think the main thing is that you make music for yourself and because you love doing it, I think you never have to write songs from the desire to please others. or to be popular, at least every time I do that, the song ends up being bad. I believe that as long as you put your heart into what you are writing and what you write has meaning for you, that will never be wrong, you cannot be wrong”, he states before answering the last question of this medium, in tune with the revisionist spirit of his film.

-There is a sweet moment in the movie when you break down while recording one of the songs. How emotionally draining was the recording process and how do you feel singing those songs now?

-Actually I wouldn’t say that it was emotionally exhausting to write the songs but rather that it was a cathartic experience. I think when you’re going through something that’s so hard to process and you write a song about it, it becomes less confusing, and easier to understand. That’s why I think that was a wonderful part of the recording process, and that’s why I’m so excited to go on tour, because once you release those songs to the world, they take on a whole new meaning. You can see how people take ownership of them, and I’m excited to see that face to face when you can meet the people on the tour.

where to see it OLIVIA RODRIGO: driving home 2 u (SOUR: The movie) is available on Disney+.

Olivia Rodrigo, between the Grammys, her most introspective journey and global fame: “I really want to play in Argentina”