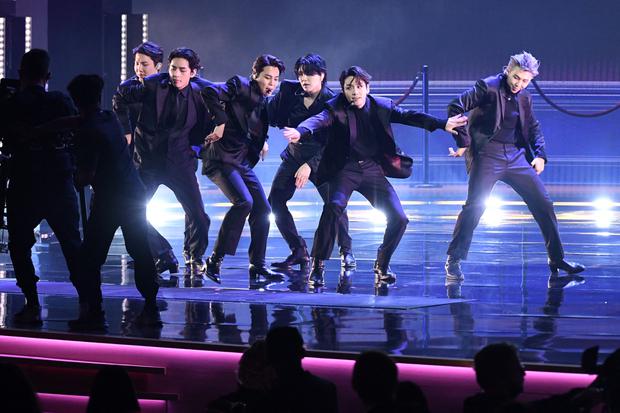 bts is going around the world with his music and his millions of fans. On Sunday, April 3, the boyband of k popattended the 64th Awards ceremony grammys held in Las Vegas, specifically at the MGM Grand Garden Arena. Bangtan did not win the expected award for the best duo or musical group category, however; he dazzled the gala attendees and the audience with his talent.

LOOK | Grammy 2022: BTS dazzled with their presentation during the musical gala | VIDEO

BTS presented their hit “Butter” at the ceremony with a curious introduction that went viral for Taehyung’s (V) flirtatious interaction with Olivia Rodrigo, interpreter of “Drivers license”. ARMY was shocked after the situation and did not stop commenting on it on networks, but the real trend would come later.

I NEVER THOUGHT I WOULD GET TO THE LOW POINT OF HAVING HIM SEND OLIVIA RODRIGO UNTIL KIM TAEHYUNG DARE: pic.twitter.com/JbV9pePZLU

Here we leave you some images of the presentation of BTS:

BTS was nominated for the category of Best Performance for a duo / group, with their single “Butter”, which they presented at the gala. Doja Cat and SZA took the category award with “Kiss me more”, the popular song that went viral on TikTok.

After learning the result of the category winner, ARMY got too angry at how the Grammys organization is treating Bangtan and they trended #OurProudBTS. ARMY maintains that due to the decrease in audience that the award has had, they invite influential artists such as BTS to ensure that fans see the gala without giving them the deserved award for the category in which they were nominated.

The fanbase points out that Bangtan has more than one reason that makes them worthy of the coveted award. These rumors about the preference of the Grammys towards some artists are increased by the past statements of rapper Eminem, who indicated in an interview that the Grammys have their favorites and the artist with the greatest musical impact is not chosen, nor is the one who had the most success in music. industry. The interpreter of “Not afraid” also stated that he felt used to promote the show and then end up rewarding some little-known artist, without impact and with low sales.

Here is the excerpt from the interview:

Those criticisms against the Grammys were joined by Drake, who included some questionable statements in his speech at the 62nd Grammys ceremony, which supposedly would cause the microphone to be turned off in the middle of his speech. The rapper pointed out that the award is based on opinions, not facts, it does not reward the artist for having made good decisions regarding his music.

At the same time, he adds that as an artist you do not need the award if there are people singing your music or queuing for your concerts, if everyday people are in the rain or snow giving their hearts and investing their money in tickets for your show, you don’t need this (referring to the prize). You already won.

After this statement they cut off Drake’s microphone and sent commercials, the producers point out that it was a misunderstanding and that Drake was offered to finish his speech, but the artist indicated that he had already finished saying what he wanted and was happy with it. Many fans point out that this short speech by the rapper was in protest against many artists who are nominated and deserving of a Grammy and do not win any despite being relevant in the music industry.