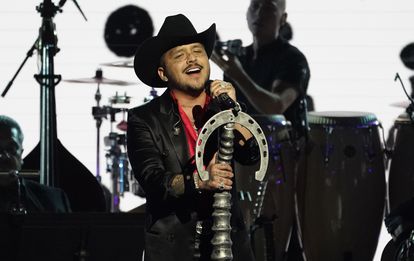 Among the handful of essential themes in Mexican music are songs by Jose Alfredo Jimenez, Armando Manzanero, Juan Gabriel, Agustín Lara and Vicente Fernández. There is a good chance that memory also holds some lyrics by Marco Antonio Solís, a songwriter and singer who has left behind his nickname, El Buki, to become one of the biggest names in the Spanish-language music industry. . This statement has been endorsed by the Latin Recording Academy, who has named Solís as the Person of the Year 2022, one of the most relevant events within the week of the Latin Grammys, which are delivered this Thursday. This recognition, awarded for more than two decades, places him at the level of other figures such as ShakiraGloria Estefan, Ricky Martin, Julio Iglesias and Joan Manuel Serrat.

Solís, 62, is originally from Ario de Rosales, a small town in Michoacán. He wrote his first song when he left town at age 12 along with his cousin Joel de él to go to Mexico City to look for opportunities. He dedicated it to the town, in what would be the hallmark of his career, a man of humble origins deeply rooted in his land, family and the Catholic values ​​with which he was raised. As a sign of his belief in his state, impacted for years by the drug-trafficking problem, Solís has made million-dollar investments in his native region. Among these, a hotel in the capital, Morelia, in which a guitar-shaped pool stands out. Popular wit calls the building Buckingham Palace.

With a style that could recall Jesus Christ in popular iconography, Solís does not hide his devotion. As a child he wanted to be a “priest or a clown,” he told the EFE news agency last year. He considers his talent to be the work of the divine. “I attribute it to the grace that God has given me to be able to express and write,” he told the editor of bill board Isabella Raygoza. This compositional talent has been exploited for years by some of the most renowned voices in Spanish, including Rocío Durcal, Raphael and Olga Tañón.

“Your name is synonymous with Mexico,” he said on Wednesday night Italian Laura Pausini, the one in charge of opening the tribute night at the Mandalay Bay casino, which was attended by Christian Nodal, Fito Páez, Sebastián Yatra; Sin Bandera, Camila and Bronco, among many others. Carla Morrison and Ana Torroja interpreted Like your womana song written by Solís, but made her own by Rocío Durcal.

As a child, he would start singing and his friends would stop playing. Mesmerized by his voice, they asked for more songs. His cousin Joel was one of his first musical teachers. He taught her to play the guitar and with him she formed his first band, Los hermanitos Solís. Fame would come in the 80s with Los Bukis, a word with which the Yaqui people, in northern Mexico, name their children. The group, which he joined in the seventies at the age of 17, became one of the first phenomena of the grupero movement of that decade, with which bands from the province conquered the airwaves with romantic ballads.

Los Bukis’ anthem came in 1987 on the group’s self-titled album. On the cover of this, Solís wore a white suit, a point of contrast with the other five members, who dressed in the classic black. Among these was Joel and a brother of Marco Antonio, José Javier. The lyrics that open the collection are one of his most emblematic: “You’re leaving, my love/ That’s how you want it, what am I going to do/ Your vanity doesn’t let you understand/ That in poverty you know how to love…”. Your prison it was written a year earlier, in what Solís considers “a very vulnerable moment” in his life, “emotionally difficult and totally exhausted,” he told bill board. He composed it in a hotel in Coahuila. Her sentences came to him as she tried to fall asleep. “I had to attend to that,” says Solís like a man who does not deny his responsibilities.

The success of Los Bukis is not a thing of the past. The group met in 2021, when it was 25 years since the separation. It was Marco Antonio’s idea, who brought together the original members of the band again. This meant a lifeline for many of them, who did not enjoy the fame (and fortune) of the composer. One of the musicians was driving an Uber. Others lived day to day with odd jobs. They met, a quarter of a century later, in the Mexico City studio where they recorded Your prison.

After the pandemic, they started playing again. Before Bad Bunny ousted them this year with the tour of A summer without you, were the first Latino group to tour sold-out stadiums in the United States. The tour a sung story it consisted of nine concerts in six arenas. Among these, the imposing SoFi in Los Angeles, before 70,000 people. In less than a year they filled it twice. They also sold out two other dates at the Los Angeles Coliseum, which has a capacity for almost 80,000 people. In that same city it can be seen at the Grammy Museum, until March 2023, And foreverwhich takes a tour of the career of Solís, who has won five Latin Grammys and has been nominated six times for a Grammy.

“I have been more friends with failure than with success,” Solís said tonight, in his first words after receiving the award. “Failure has been my best advisor and it was he who introduced me to success,” she added.

Magazine pollstar, specialized in the box office of the industry, described this Los Bukis tour as one of the phenomena of 2021. They earned almost 50 million dollars, the sixth most profitable worldwide. The success led to extending the tour through 2022. At the same time, Solís began another solo tour, I’m so excited to see you. This took him to Europe, where he filled venues in Madrid, London, Paris and Milan. Only Tenerife resisted the charms of El Buki. The singer failed to sell his entire show on the island.

In 1983, he wrote a song for his then wife, the also singer Marisela (his current wife, for almost 30 years, is Cristy Solis). It was a song that was born in the early hours of loneliness, nostalgia and bohemianism. At that time, Solís lived at night and got up at two or three in the afternoon. If you hadn’t gone arose from those sleepless nights. The cut was included in a 1999 album. It is then the moment where El Buki gives way to Marco Antonio Solís. “I am already entering more solidly with the album pieces of my soul. It was very successful. She had already been a soloist with The blessing came, More than your friendbut Marco Antonio Solís is situated from pieces of my soul. It is the definitive step”, the artist told EL PAÍS this Tuesday. Romeo Santos, the bachata star, performed invent meanother of the hits that make up this album.

The song was immortalized by Alfonso Cuarón in And Your Mother Toowhere Maribel Verdú danced the song in front of the charolastras, Diego Luna and Gael Garcia Bernal. The scene was forever linked to that song. Even for Verdú, who considers it her favorite in Solís’ repertoire and who came to use it as a ringtone on the telephone for a time. The Latin Grammys have crowned tonight the trip that turned El Buki into Marco Antonio Solís.