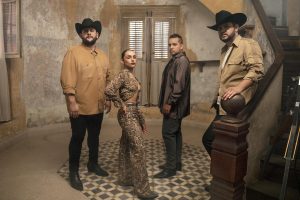 Mexico City, Dec 11 (EFE).- The Mexican musical group Matisse returns to Mexico with a Latin Grammy and is getting ready for a new and unpublished album in 2023, in which they are not afraid to continue experimenting with genres and collaborations, according to their members in an interview with EFE.

The members of the group, Melissa Robles, Román Torres and Pablo Preciado, revealed that after winning the Grammy in the category of “Best Regional Mexican Song” for the single “Como lo hice yo”, they return from Las Vegas “very inspired and with I really want to make music.”

Matisse explained that they will take 5 days in Hermosillo, Sonora, in northern Mexico, to start a creative process prior to the events they have in the main Mexican metropolises in February 2023, in Mexico City, Guadalajara and Monterrey, with their “After the end of the world” tour.

In Mexico City, Matisse sold out the tickets for a first date (February 11) at the National Auditorium, the capital’s highest venue, so they announced a new second date for February 12.

“With that we close the year to be able to write, we want to write an unpublished album of pop, regional Mexican, mix, fusion and also see who we do collaborations with”, revealed Melissa Robles.

AN UNPUBLISHED DISC AND A MIX

The Mexican group, with more than 8 years of career, assured that their fans will receive a new album in 2023, and announced that they even estimate to have up to a couple of singles that they can share with their followers in the presentations scheduled for the second month of next year.

“Definitely, an unpublished album is coming in a mixture of pop with regional Mexican,” said Robles.

The members of Matisse, who originated in Mexicali, Baja California, also explained that they are not afraid to continue innovating and betting on new rhythms.

They are also looking for new collaborations with singers of urban genres, in salsa, regional, pop and the genre with which they started: the ballad.

“We want to make much more music in freedom, without thinking so much about what genre, what yes, what no, so let us go, but we will definitely be premiering music at the beginning of the year, also to present it at the National Auditorium and at the events that we also have Guadalajara and Monterrey”, commented Robles.

The members mentioned that they still do not have names of artists with whom they can collaborate, although they did not rule out any genre in which they could innovate.

“If you don’t have the itch to keep doing new and different things, then you’re already dead,” shared Román Torres.

Pablo Preciado also mentioned that as creatives and artists something very important is “to be looking not to stay in the same thing because if the candle does not go out.”

However, the Mexican musical trio expressed interest in first having a portfolio of songs and from them, beginning to define artists who could collaborate with the Mexican group.

“The truth is that we want to have as much material to be able to begin to imagine who we can do what with,” added Robles.

In addition, the Latin Grammy winners celebrated the rise of their most recent single “Te vale madre”, in collaboration with Edén Muñoz, which has already had more than 3.3 million views on Spotify since last November 10, when it was released. released to the global market.