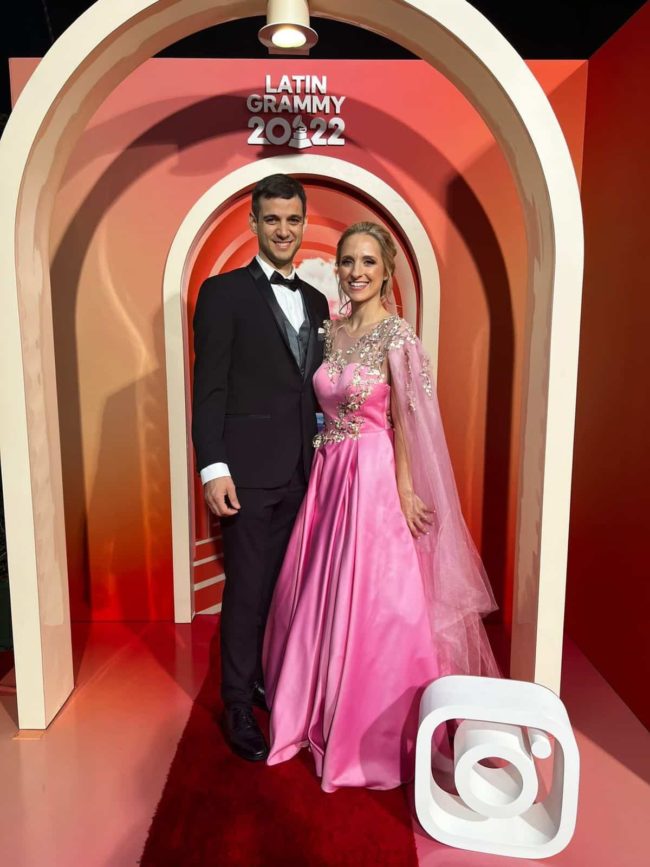 The Master Carlos Sotomayor, Director of the Bachelor of Fashion Business and Image at the Autonomous University of Guadalajara (UAG), designed the dress of the Argentine singer Athenas and the tuxedo of her husband, the musician Tobías Buteler, for the 2022 Latin Grammys in The Vegas, Nevada.

The costumes that both modeled during the red carpet of the 23rd annual award ceremony were rated by the international press as one of the 32 best outfits.
“For me it was an honor to have been able to dress Athenas and her husband Tobías Buteler, who had a 2022 Latin Grammy nomination. I had the fortune and joy of traveling to the city of Las Vegas to take the clothes, try them on and dress them. on that important day,” he said.

This is the first time that Mr. Carlos Sotomayor is invited to the Latin Grammys to dress an international artist, since he had previously only worked for national artists.

“It was a very cool experience, in fact, from here at the University two students, Jessica Terán and Leonardo Cobián, supported me to take the measurements and showed them in a video call how to take their measurements, so Athenas took the measurements from a distance of Tobias and, vice versa, Tobias took those of Athenas”, he commented.

Dress
“The dress carried a lot of meaning for this very special category of Christian music album, obviously I had to take care of the public of Athenas, the album and that it unite the family,” said the designer.

It should be noted that Athenas is the first Catholic singer to be nominated for her album “Alfa y Omega” in the “Best Christian Music Album” category.

The Master Carlos Sotomayor explained that in the dress on the left side of the shoulder he placed a sleeve as a symbol of a veil, representing the Virgin Mary, and all the embroidery comes from the left shoulder to define the alpha and omega as the beginning and the end. .

He recalled that the friendship with the Argentine soloist was born a couple of years ago, when she attended an event called “Cielo Abierto” in Guadalajara, where many Catholic singers from different countries attend and invited him to take the image to Athenas.

Later, he added that the singer’s career and Tobías began to rise to fame, today they live in the United States and became very dear friends to him.

For the mtro. Carlos Sotomayor having the opportunity to design for a red carpet as important as the Latin Grammys is a dream come true, in which his parents, his wife and his daughters always supported and accompanied him.

“My invitation is to never give up, don’t get discouraged, professional life is complicated; there are going to be many falls and we have to know how to get up because the important thing is to know how to get up and always keep going, and it is never too late to fulfill a dream”, the academic recommended to the students.

Likewise, he thanked the Autonomous for all the support and backing that he always gives him to continue growing as a Haute Couture Designer.

UAG Maestro stands out with his designs at the Latin Grammys