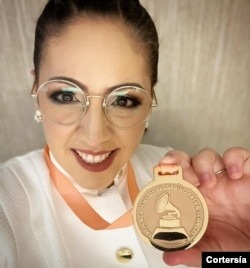 For the Venezuelan violinist Daniela Padrón, a nomination for the most important Latin music awards, the Latin Grammys, was enough to make her feel “absolutely a winner”.

Padrón, 35, became the second woman in Latin Grammy history to be nominated in the Best Instrumental Album category. In addition, this year the category was dominated by Venezuelans, four of the five nominees were Creoles (C4 Trio, with the album Back to 4; Gerry Weil and the Simón Bolívar Symphony Orchestra, with Gerry Weil Symphonic, and the group Raíces de Venezuela, con Ofrenda) a sign that the genre has made great strides in the South American country.

Padrón was nominated for the instrumental album “Ella”, which she worked with the Cuban pianist Glenda del E, to pay tribute to the music of Latin American women of different genres and eras.

The news took her by surprise, as she found out through social networks and although she did not win, she considers herself honest.

“I did not win the prize and I feel absolutely winning. Glenda and I are the second and third women to be nominated in the Best Instrumental Album category in Grammy history. That fills me with great honor,” she said in an interview with the Voice of America.

“Being nominated for The Grammys never crossed my mind. I imagined being at concerts, giving recitals and being applauded. I remember that in my room I imagined those moments, people applauding,” she added.

The Venezuelan says that the making of this album did not take long. In fact, she says that it is the album that has taken her the least time. In total there were four months between recording, post-production, mixing and launching.

“The production time was very short, but I think that the fact that it is a duo album lends itself to making the production quite simple because it was a room, the two of us and a number of microphones, it was all very organic,” she stated. .

Daniela Padrón says that being the second woman nominated in the category has been an honor, but also a call to attention given the absence of more women in this category, despite the fact that there are currently many doing great work in the area.

“It is a wake-up call to see what is happening with respect to female instrumentalists because we are definitely many,” she said.

“This year something very important happened in the Best New Artist category because it was the first time in history that almost all the nominees were women, and that gives me hope that doors continue to open. This is not a comment that goes to a feminist side, they don’t have to give us space just because, they have to give us space if our music is good, if we’re doing things right, and I feel that it’s definitely like that, that’s what’s happening,” she said.

In his opinion, this visibility within the genre is important. In her case, because she seeks to be an example for young instrumentalists who are starting out.

Daniela Padrón did not connect with music by chance. Their relationship is close, even from before they were born, she assures her.

“I am a violinist because it is something that is in my DNA. My mother is a pianist. Since she was in her womb, music was part of my life. Since I was born I was in rehearsals, concerts, recitals. It was in my destiny to play the violin,” she said.

The Venezuelan began receiving piano and violin lessons at the age of 3. Later, she decided to stay only with the violin. Daniela worked her way up to becoming a professional violinist. She achieved it in her homeland of Venezuela, but she consolidated it when in 2017 she decided to emigrate to the US.

“To the United States I owe the opportunity to start over, to be in the big leagues, nominated by the academy knowing that I am part of it and being here in the place where there is so much happening, where concert tours are allowed, where There are festivals, recitals, events happening throughout the year. That is priceless, ”she maintains.

However, Venezuela is not forgotten. She says that she also has a lot to thank her country for and that is why she dreams of returning one day.

“Venezuela means a lot to me, it is my home and my land, but it is also a place that hurts me a lot because it is hard for me to think that I have not set foot on its land for more than six years and I dream of being able to do so,” he says.

While that day arrives, Daniela continues working to represent her country and leave it high. “It is an honor to represent Venezuela, in fact at the Latin Grammy ceremony I wore a liquiliqui, because if I feel proud of anything, it is precisely our traditions,” she concluded.