The President of Ukraine, Volodymyr Zelenskysurprised with a live message for the audience of the Grammys 2022. The Ukrainian president began his speech by emphasizing the tragedy of silence in the face of injustice.

Before the cameras of the world that visualize the delivery of the Grammy awards, the president took the opportunity to ask for his nation and specified that they still needed the union of the world to help all the cities of Ukraine that are being destroyed by the Russian invasion.

“What is more opposed to music than war?”, he said at the beginning of his message during the gala The 64th edition of the Grammys on Ukrainian President Volodymyr Zelensky in a call to stop Russia’s war against his country.

President of Ukraine sent a message to the world at the 2022 Grammys Photo: Screenshot @CBS

Volodymyr Zelensky spoke about music, the conflict with Russia and stressed that people of all ages are among the deadly victims of the confrontation with Russia. However, He made a special emphasis on children, who were part of the sector hardest hit in the war.

”More than 400 children have been injured and 153 have died, and we will never see them draw. Our parents are happy to wake up every morning in bomb shelters but alive,” she added.

“Our parents are happy to wake up every morning, our loved ones don’t know if they will wake up again… our musicians wear bulletproof vests instead of tuxedos… we fill the silence with musicTelling the truth about the war is very important on social networks and on television, give us your support however you can”, he said in the first part of his speech that lasted just over 5 minutes.

Presentation of John Legend at the Grammys 2022

To conclude, the Ukrainian president alluded to the freedom that all the artists and fans who gathered at the MGM Grand of Las Vegas where they can live freely and without the fear of war: “Peace will come to all our cities, which are legends and they are being destroyed by war, but I have a dream that they are alive and as free as you on the grammy stage”, he stressed.

For his part, and as a sign of solidarity with Ukraine, the renowned performer and composer, John Legend took the opportunity to interpret his most recent success Free with the Ukrainian poet Lyuba Yakimchuck, who also advocated for peace and the presence of various Ukrainian artists such as Siuzanna Iglidan and Mika Newton surrounded by the flag of Ukraine.

It should be noted that The National Academy of Arts and Sciences of the Grabation, in charge of organizing the Grammys achieved what the Oscars did not, introduce President Zelensky calling on the public to defend Ukraine’s struggle for freedom by all means. 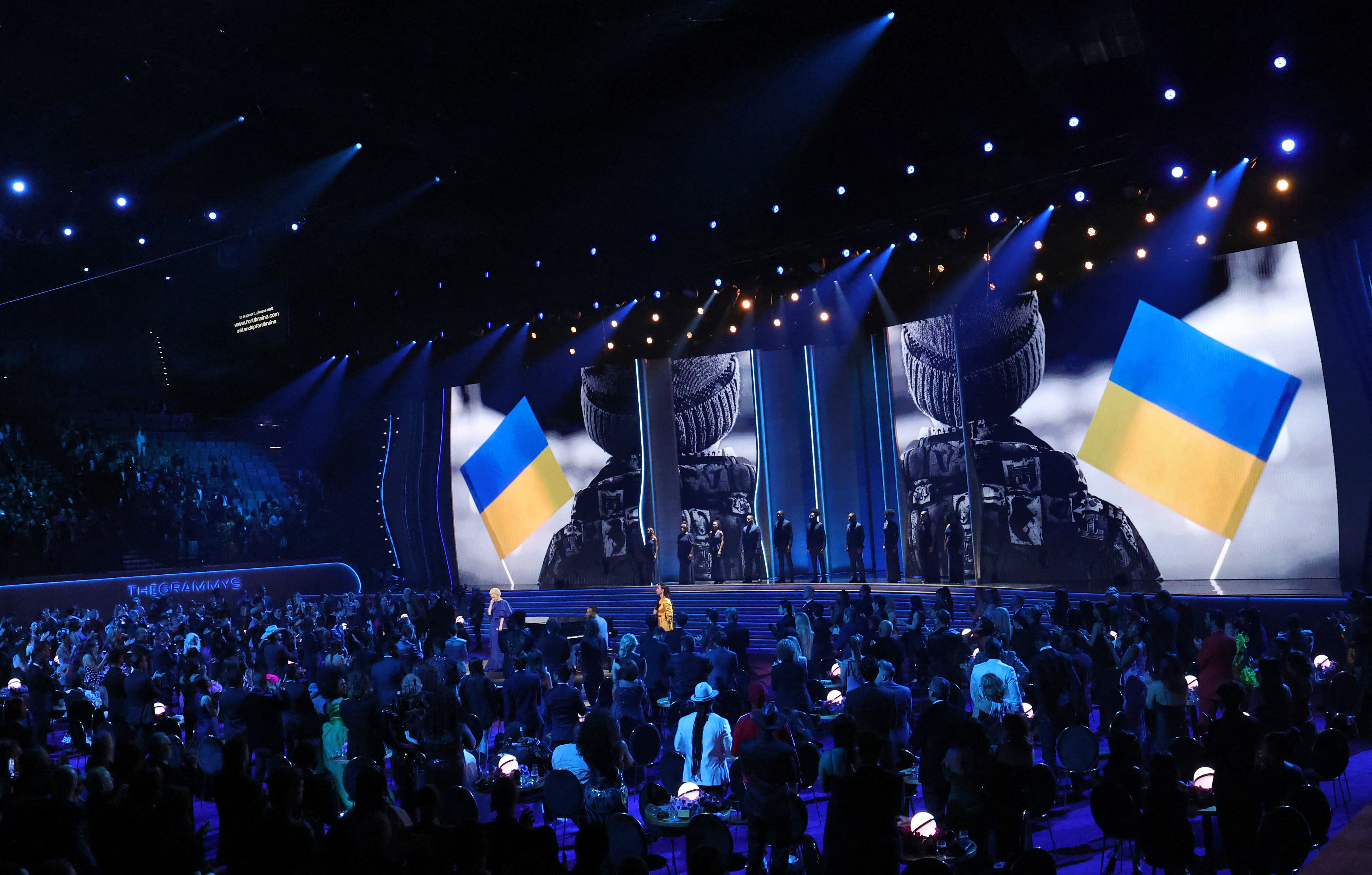 Volodimir Zelenski is a trend in social networks REUTERS/Mario Anzuoni

On March 25, The New York Post claimed that President Zelensky was in talks to appear at the Oscars, but that moment never came despite a number of celebrities banding together to make it happen, including one of the Oscar night’s main presenters, Amy Schumer.

“I wanted to find a way to get Zelensky on satellite or record a video or something, just because there are so many eyes on the Oscars. […] I think it’s a great opportunity to at least comment on a couple of things. I have some jokes that highlight the type of current condition,” Schumer said.

For his part, and in the absence of Zelensky at the Oscars, one of Hollywood’s great stars, Sean Penn, called for a boycott of the Oscars ceremony if the Ukrainian president did not participate with a speech.

BTS confessed that they want musical collaboration with J Balvin at the 2022 Grammys
Vicente Fernández won a posthumous Grammy for “A Mis 80′s”
In memory of Taylor Hawkins, the heartfelt tribute to the Foo Fighters drummer at the 2022 Grammys