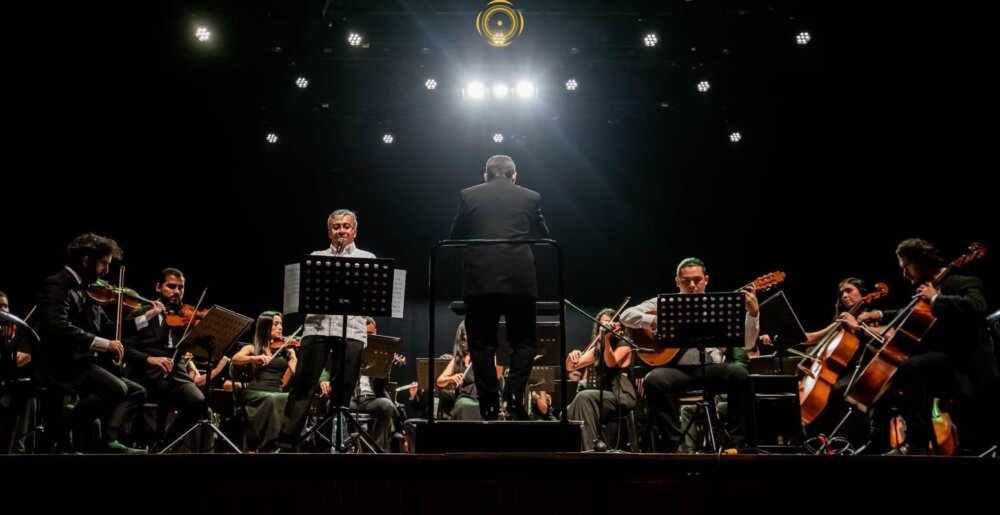 The notes of Suite No. 1 – Alpha by Maestro Caldas, Juan Carlos Valencia, opened the Seventh Season Concert of the Caldas Symphony Orchestra on July 15 at the Los Fundadores Theater, which was once again filled with spectators, with the privilege what it means for Caldas to have a group of this category, we never get tired of repeating it.

To the delight of all attendees, this concert had three novelties:

First. The repertoire was entirely of Colombian music, unpublished for clarinet, with works and arrangements by composers of wide national recognition, several of them from Caldense.
Second. It was the culmination of the recording of an album that the orchestra aspires to be nominated for a Latin Grammy.
Third. It featured the participation as soloist of the clarinetist Maestro Francisco Javier Rivera, born in San Félix (Caldas), a childhood friend and partner in the Caldas band program, of the principal conductor of the Caldas Symphony Orchestra, Maestro Leonardo Marulanda, also a native in San Felix. After 40 years and successful journeys down different paths, these two virtuoso artists met again in their role as musicians united in this project. 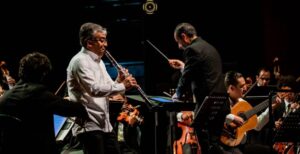 Maestro Francisco Javier is a classically trained clarinetist but decided to dedicate his life to popular music, specifically Colombian music, a genre with which he has been the winner of the Festival del Mono Núñez and the Festival del Pasillo.

He states that with the recording of this album he reached a goal that he had set for himself since he was a child, and it is especially significant to do so with the Caldas Symphony Orchestra where he had his first opportunities as a musician, including as a soloist. In the same way, he explains, “because it is Colombian Andean music that does not have much recognition in this format, despite the fact that new proposals arise, new repertoires with new trends, and above all with the participation of emblematic people in musical making. both from the composition and from the orchestration”.

He says that it is a very remarkable project also for the orchestra, and he recognizes this in this audio:

For his part, Maestro Leonardo Marulanda assures that making Colombian music gives transcendence to the orchestra in a genre that is sometimes very neglected, a very valid exercise for the reasons that he explains below:

Maestro Francisco Rivera is proud of his instrument, the clarinet, which he considers an extension of his body “through it I feel that I don’t make notes but that I can speak and reach people. On a certain occasion at a concert the moment was so emotional that the excited people made me understand what it means to be an artist. As a result of that presentation I can assure you that an artist is someone who has the ability to transmit an emotion and that emotion is transmitted thanks to the instrument that is, I repeat, a part of me”.

With Colombian music, the OSC goes for a Grammy