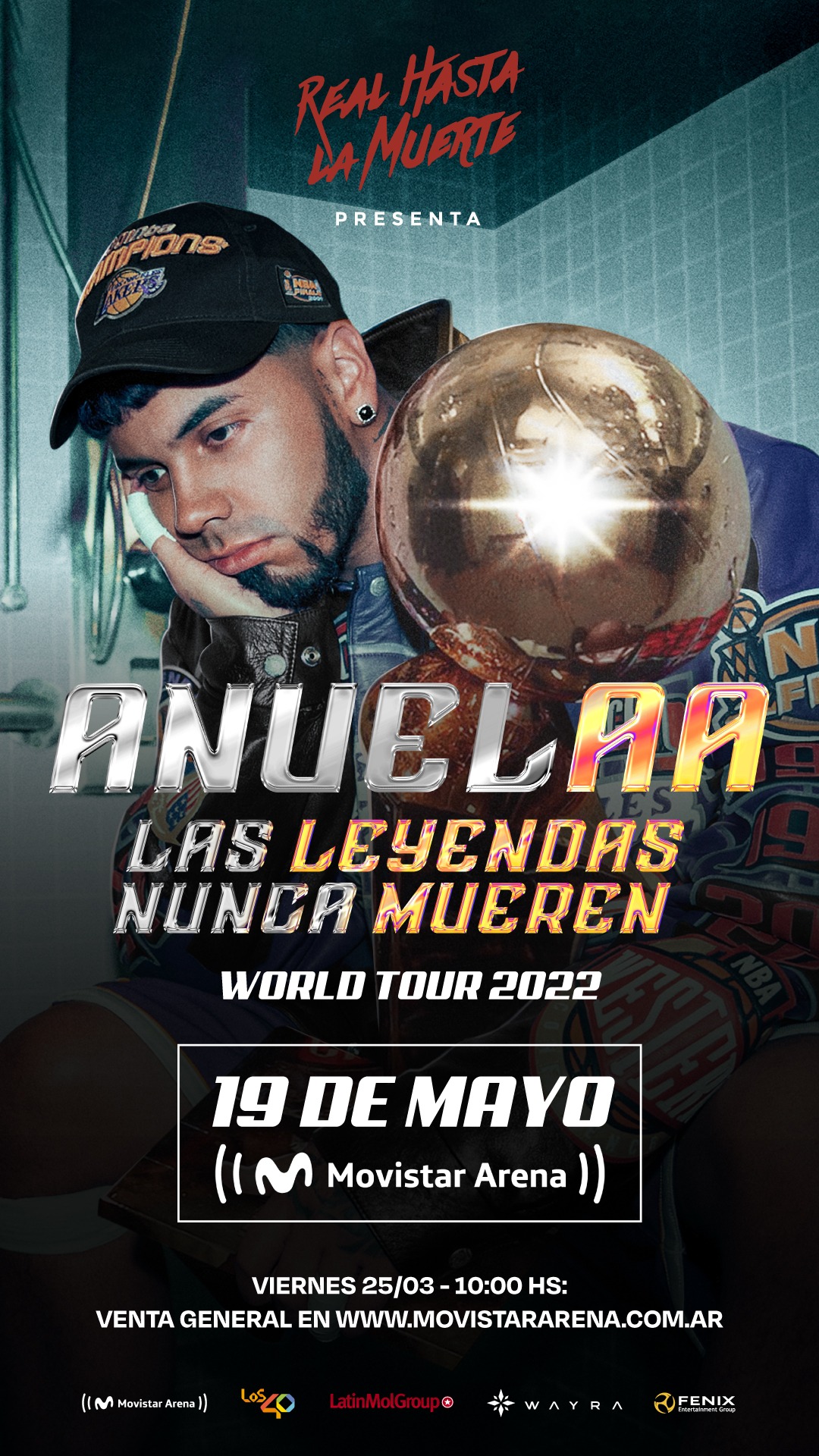 The pioneer of Trap in Spanish Anuel AAreturns to our country in the month of May to offer his show that is part of the tour called “Legends Never Die”.

The presentation will be in Buenos Aires on May 19 at the Movistar Arena.

Tickets will be available from Friday at 10 am, through www.movistararena.com.ar

This will be the second time that he performs in Argentina since in 2019 he performed a show at the GEBA stadium.

Anuel is considered one of the greatest exponents of urban music worldwide, so his concerts are always highly anticipated by the public.

The show promises to be full of emotion and with countless hits that will make the entire audience dance and enjoy. Together with his dance team and his band, they will make the Movistar Arena dress up for a party on May 19.

At the end of last year he released his latest album, a conceptual project that pays tribute to iconic moments, honoring the legends that have inspired him throughout his career, and that aims to offer fans his essence of Trap and Reggaeton. In addition, the artist has shared his vision that legends do not die with his stories and successes.

Anuel is internationally recognized for being the pioneer of Latin Trap. Just when his career was taking off exponentially, the singer was arrested and served a 30-month prison sentence in Puerto Rico. On the same day as his release from jail in July 2018, Anuel released his album Real Hasta La Muerte, reaching #1 on Apple Music worldwide, #4 in most downloaded albums on all digital platforms and the album most listened to Latin during the first week of its release. In less than a month, Real Hasta La Muerte was certified Platinum by the RIAA.

After his highly acclaimed comeback, Anuel has successfully toured the United States, Latin America and Europe, with “sold outs” in every city. He has garnered several nominations and awards, including New Artist of the Year at the 2019 Billboard Latin Music Awards. His songs have reached billions of views on YouTube and Real Hasta La Muerte became a top 50 Latin album. of the decade.

In 2020 he released his second album Emmanuel which debuted at number eight on the US Billboard 200 chart and number one on the US Top Latin Albums and Latin Rhythm Albums. Emmanuel achieved the third biggest debut of 2020 for a latin album. Of the 22 songs, 14 debuted on the Hot Latin Songs chart, two of them in the top 10. It was the second best-selling Latin album in the United States.

In 2021, he teamed up with Ozuna for the collaborative album Los Dioses, which debuted at No. 1 on the US Top Latin ¹ and Latin Rhythm Albums, and reached No. 10 on the US Billboard 200. The album has over 300 million streams on Spotify alone and over 340 million views on YouTube across all music videos from this project.

Anuel has won an MTV EMA, 5 Latin AMAs, a Latin Billboard, 7 Premios Juventud, 3 Premio Lo Nuestro and a Heat Latin Music Award. She was also the face of Foot Locker’s summer and fall 2019 campaigns, she owns a basketball team in Puerto Rico and is a sponsor of the women’s basketball league in Puerto Rico.