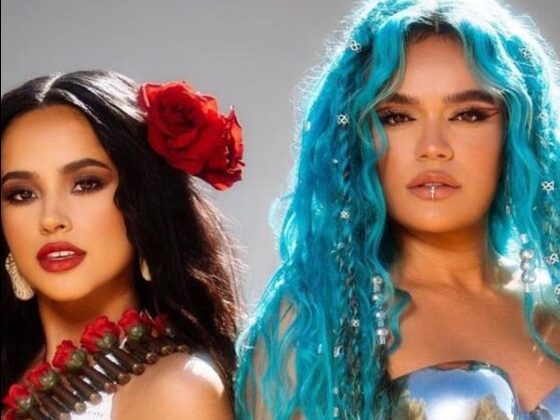 Global superstars Becky G and Karol G have just released a powerful single called “MAMIII”. With an irresistible dance beat and catchy lyrics, the long-awaited collaboration is destined to become an empowering anthem that inspires an attitude of strength, independence, positivity and style, just like a “MAMIII” (mommy).

The single was produced by hitmaker Ovy on the Drums, and was written by Ovy, Becky G, Karol G and Elena Rose.

The powerful duo that these two queens of music form comes from a long time ago, since both collaborated on a song by Mau & Ricky (“Mi Mala”) in 2018 and since then they had wanted to meet once again.

Young singer, songwriter, actress and activist Becky G was born to be on stage and her multi-faceted career promises to make her an iconic figure. The twenty-four-year-old global superstar’s accomplishments include three #1 hits on Billboard’s Latin Airplay chart, a starring role on “Power Rangers” and a guest starring role on the Emmy Award-winning series “Empire.” Her successful career also includes the launch of her own beauty brand Treslúce as well as her Facebook program Ella Watch called “Face to Face con Becky G”.

He has toured with great artists such as Katy Perry, Demi Lovato, J Balvin, Fifth Harmony and Jason Derulo and has recorded collaborations with Daddy Yankee, Maluma, Anitta, Natti Natasha, ZAYN, Bad Bunny, Ozuna, Pitbull and CNCO, among others. .

Becky G has won the American Music Award for Favorite Latin Artist for two consecutive years (2020 and 2021) as well as the E! People’s Choice Latin Artist of 2020. She also won the Latin American Music Award for Favorite Female Artist in 2018 and 2019. Additionally, in 2018 she received the Latin AMA for Favorite Urban Song (for “Mayores”); and she was awarded the Diamond Play Button award from YouTube for having surpassed 10 million subscribers on the digital platform (it currently has more than 19 million).

The granddaughter of Mexican immigrants, born and raised in Inglewood, California, Becky has been no stranger to the struggles her community is experiencing as she passionately uses her massive platform to speak out against inequality and raise awareness of current social issues such as Black Lives Matter and DREAMers. , and has set out to contribute to the well-being of his community through this work.

The young woman was honored with the Agent of Change award at Premios Juventud 2020 for her activist spirit and using her platform to inspire positive change. At the 2019 Latin American Music Awards she received the Extraordinary Evolution award for the phenomenal success she has achieved at her young age. She was also honored by the Latin Recording Academy as one of the Leading Ladies in Entertainment Young Women (2018) and by her hometown of Inglewood, California for her contributions to the Hispanic community. Likewise, she has been recognized as one of Rolling Stone’s “18 Teens Shaking Up Pop Culture” (“18 Teens Shaking Up Pop Culture”) and one of the 21 artists under the age of 21 who have achieved success (“21 Under 21”) on Billboard.

The multifaceted star has co-hosted a number of prestigious award shows over the years, including the 2019 European Music Awards (MTV) and the Latin GRAMMY TV special ELLAS.

Likewise, in 2020, as his own initiative, he developed and produced his podcast En La Sala with Amazon Music-Live, which he presented from his living room during the confinement due to the COVID-19 pandemic, with which in each episode he donated 10,000 dollars to nonprofits and spoke with top guests, from Vice President-elect Kamala Harris on politics to reggaeton star J Balvin on mental health. She recently premiered her own Facebook TV show “Face to Face with Becky G” and her first interview was with Demi Lovato.

It is worth mentioning that the artist is also currently an ambassador for the Xfinity Comcast brand as well as Michelob Ultra Pure Gold.

It should be noted that in October 2019 Becky released her debut album MALA SANTA, which was certified 8X Platinum in the US, Platinum in Spain and Gold in Mexico. Click HERE to listen and/or download the album.

Internationally recognized as the most relevant leading female artist of the moment, Karol G has become not only an icon of pop culture but also an important and influential power in Latin music globally. She has collaborated with big name artists like Anuel AA, Bad Bunny, J Balvin, Luis Fonsi, Nicki Minaj, Nicky Jam, Ozuna, Quavo, Jonas Brothers and many more. She is the singer-songwriter of the biggest hits in Latin music, including “Tusa” with Nicki Minaj, which became the #1 Latin song of 2020, after a run at the top of all global charts.

Karol G is the winner of a Latin GRAMMY and countless awards, including 50 Diamond certifications by the RIAA in the United States. After essential achievements, the superstar has demonstrated a seamless transition to international markets, breaking down barriers of language and stereotypes. Closing out 2020, she was proclaimed by Billboard as the #1 Latin Artist in the World for the second year in a row.

In addition, she is the best performing female artist in general sales, with more than 24 billion views globally and more than 80 million fans on her social networks. Demonstrating her power as an international artistic powerhouse, her most recent album “KG0516” made history with the biggest debut for a Spanish-language album by a Latin female artist. The album took over the #1 position on Spotify’s “Top Global Album Debuts,” Apple Music’s “Top Latin Albums” and Billboard’s “Top Latin Albums” charts. Earning the best performance of a Spanish-language album by a female Latin act, “KG0516” closed its first week of release with more than 24,000 units sold, and currently has more than 11 billion combined audio and video streams in the US. digital music platforms