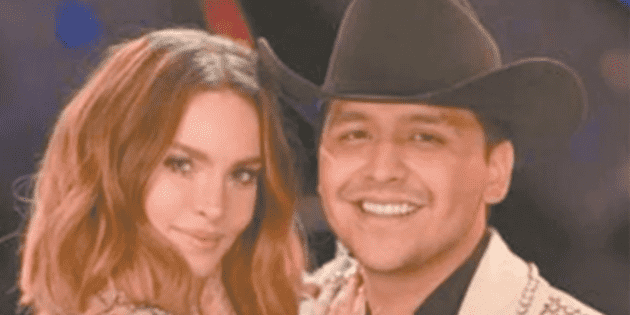 Christian Nodal announced tonight on his personal and certified Instagram account that he broke off his romantic relationship and his commitment to the singer Belinda.

In a message in his stories, the also singer wrote “I want to share that we have decided to end our commitment and our relationship, each taking the best of the other. With much gratitude for having accompanied us during this time. I ask for respect for the decision we have made, where each one will live their separation process in their own way and always wishing each other the best for the happy times lived and those of trial as well”.

He also said that he will not speak further on the subject.

It was learned that they began their courtship in July 2020 and their engagement in May 2021.

The version began a few days ago when Nodal through his social networks posted messages of apparent spite.

To this is added that the journalists Javier Cerniani and Elisa Beristain, hosts of “Gossip No Like”, affirmed that the couple had broken up after Belinda asked Nodal to borrow four million dollars. She figures that the singer would use to settle her debt with the SAT (Tax Administration Service).

“Belinda would have wept with crocodile tears for Christian Nodal to lend her four million dollars so as not to go to jail because it is the money she owes to the SAT,” Cerniani said.

According to the journalist, after Belinda asked him for the loan, Christian asked his lawyers to talk to Belinda’s accountant to help her settle her debt, but discovered that she only owed 500 thousand dollars to the SAT and not four million dollars as she had saying.

It is said that the singer wanted the money to pay for the house that Lupillo Rivera bought her, which would allow her to finish paying off the debt and taxes on the house and thus keep the property. Will be?

Belinda and Nodal
In 2020 they made their relationship public, which was widely accepted among their fans.

It was in the month of May of this year when Christian Nodal, through his Instagram account, made his marriage commitment official with Belinda, to whom he gave an emerald-type engagement ring valued at three million.

The romantic proposal took place in a very exclusive restaurant in Barcelona, ​​Spain and which the singer reserved for the event in which he gave the engagement ring to Belinda and she said yes!

Since they began their relationship in August 2020 after meeting on the “La Voz México” program, they became the couple of the year in the country and were always very close despite the many rumors that arose about possible fights or breakups .

Belinda “the princess of Latin pop”

Belinda is a naturalized Mexican singer, actress and Spanish businesswoman.

Her career began when she was a 10-year-old girl. Due to her talent, she has been considered the “princess of Latin pop.” Among her first hits are the songs “Boba Niña Nice”, “Ángel” and “Luz singravida”. She collaborated with the group Moderatto for the song “Diing slow”. For 2010 she returns with Egoísta next to reggaeton singer Pitbull and Dopamina. In 2012 she released the single In the Dark.

And in 2019, he made one of his most popular collaborations with Los Angeles Azules and Lalo Ebratt in the song “Amor at first sight.”

With its own line of vegetable protein with marine collagen. He has more than 14.5 million followers on Instagram.

Christian Jesús González Nodal, also known as Christian Nodal, is a Mexican singer and songwriter. His first single published in 2016 was “Adiós amor”.

At 22 years old, he has managed to position himself as a representative of the Mexican regional. He has collaborated with Maluma, Sebastián Yatra, Piso 21 and Jessi Uribe, among others.

The nickname of Speedy Gonzáles was born when a few months ago the singer lowered all his Instagram posts and only left the image of the looney tunes character. This was the first time that there were strong rumors about his and Beli’s separation, but during an interview with CQ magazine he cleared everything up.

“The thing that Speedy Gonzales is one of my favorite characters and I feel like it’s me. He is supposed to be the fastest little mouse in the whole world, or in Mexico. He identifies me a lot because of how my career has been: super fast, ”Nodal explained.

“Whenever I upload this photo, it is because something very crazy is coming… Whenever I put it, it is to represent that I am going from Speedy González, that something machin is going to come out,” he said.

Nodal tattoos
The interpreter of “Botella after bottle” had three tattoos, one of them between his ear and beard that says “Beli”.

The second is Beli’s look on his chest and finally he tattooed the word “Utopia” on his face.

So Internet users have not missed the opportunity to create memes about the breakup and remembering when Lupillo Rivera went to remove the tattoo that was made in relation to Belinda.

Meanwhile, both have already downloaded all the photos and videos from their social networks in which they were together.

Apparently Nodal’s temperament, Beli’s jokes, the excesses to please the singer are what ended the relationship that seemed to finally reach the altar.

AN INFORMED PUBLIC
DECIDE BETTER.
THAT’S WHY INFORMING IS
A COUNTRY SERVICE.


THEY BELIEVE IN DEMOCRACY

AND LET’S MAKE A COUNTRY.

We have been doing journalism for 106 years. And now, as in other periods of El Salvador’s history, journalism is essential for public opinion to be strengthened.

Christian Nodal confirms the unexpected: announces breakup with Belinda; “I won’t talk about it anymore”