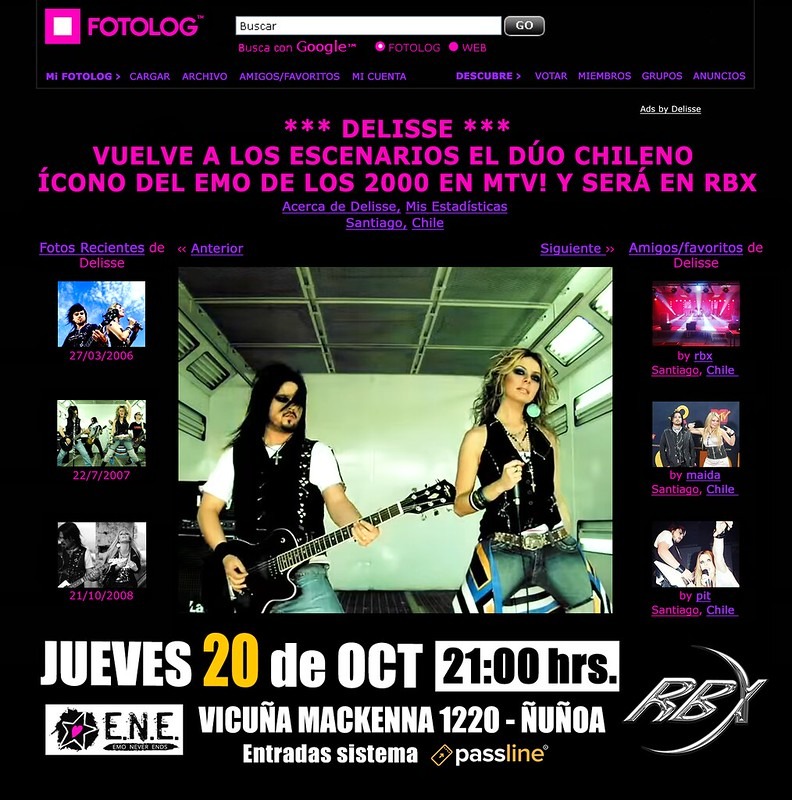 The Chilean rock duo was one of the most important national exponents on the MTV Latin America signal during the 2000s, a decade in which rock with emotional and existential lyrics was the great protagonist of the worldwide music scene. Today they return to celebrate 15 years since the release of El Peso del Dolor, with a live show this October 20 and the preparation of new material just when the style (and rock in general) is experiencing its great revival in the world.

During the second half of the 2000 DELISSE captured the attention of the public and the media of the time for the emotional charge of its lyrics, its powerful sound, its heartbreaking choirs, its rock energy and the scenic strength of its members, MAGDALENA ATRY (@maidaatria) and CRISTIÁN “PIT” MOYA (@pitcristian), achieving great fame and popularity in the teenage and twenty-something public thanks to the high diffusion and rotation of the videos from his album THE WEIGHT OF PAIN in mtvwith singles like “The Weight of Pain”, “I thought they would be”, “I want to be able to run away”, “No one will know”being one of the most requested Chilean bands of the channel and recurring number in iconic programs like “The 10+ Orders”. They were also invited to THE MTV’08 AWARDS in Guadalajara, Mexico Y to be part of your traveling program MTV-SET the year 2011.

Like the Anglo artists and bands with whom they shared the programming grids of MTV and the most important radio stations and who are back today, DELISSE is also back with the same strength and emotional rock energy that characterizes them, just 15 years after the release of his album EL PESO DEL DOLOR, which was released at the end of 2007. Precisely for this reason, the first stage of this return will be focused on working on the “come back” and revival of El Peso del Dolor, a song that Furthermore, UNIVERSAL MUSIC PUBLISHING recently relaunched on its worldwide website to support this comeback. In addition to this, Delisse is producing new audiovisual material with El Peso del Dolor, which will premiere very soon on TikTok, as well as a surprise version of this song that will be available on various platforms before the end of the year and live shows from October. Parallel to this revival, the duo is already working on the composition and models of what will be their new material.

The show that opens the fires of this return will be on THURSDAY, OCTOBER 20 at Sala-Bar RBX (Vicuña Mackenna 1220, Ñuñoa) at 9:00 p.m., where they will play together with their new live band. Then, before the end of the year, they will perform an unplugged show at ROCKAXIS (the date they will announce on their social networks), plus other dates that are on the way.
This first show, October 20 at RBX, will be a night in which they will meet again after 15 years with their teenage fans of the time, today in their 30s, whom DELISSE will make travel to their adolescence. During that night, only music from the 2000s will be played by the bands and artists with whom they were contemporary and shared the same programming grids on MTV and on the different radio stations. Even the flyer of the show is an exact replica of the Fotolog 2007 design. In this link you have direct access to the event and the sale of tickets that are by PASSLINE system https://www.passline.com/eventos/rbx-presenta-delisse

Delisse announces her return to the stage and new music – Disonantes.cl