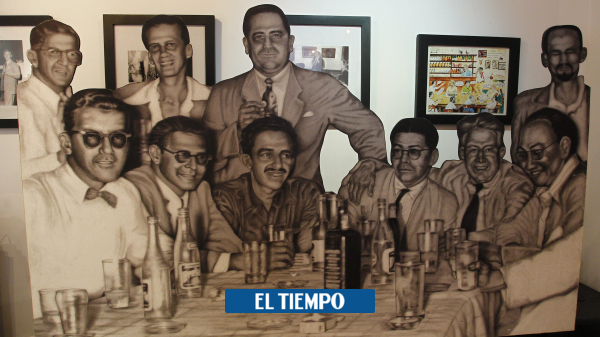 What was it that made Yulieth Mora, the winner of the X National Short Story Prize La Cueva, turn off the light and decide to stay inside?, surrounded by darkness, savoring the warm caress of silence, while outside, in the Bogotá of anger, laughter, rain, broken dreams, unfinished loves, continued the indifferent symphony of common things.

Maybe Yulieth turned off the light to feel Jess’s heartbeat much stronger, to know that her character, the elusive and beautiful girl, who was not ready for love, the same one who traverses the pages of her book with timid indifference. story, I was there, by his side, escaped from the computer, or perhaps at the bar of some bar waiting for the barman to serve him a Gin and tonic.

When Yulieth set out to write this story, which is ultimately the central story of a series of stories that she had been working on in recent years, she was clear that the central topic of that project was something as everyday, as common, as relationships. couple and lack of communication, because many times loving is just that, an ordinary ardor, an instantaneous combustion or a prolonged daydream that makes us feel alive.

When you interview people you realize that they are beautiful or they say beautiful things and they don’t know it until they read it.

Yulieth, as she herself affirms, began with the profuse readings that served as a guide, somewhat late. Without a doubt, the intense conversations at home, next to his mother, his brother and his aunts, became the genesis, the seed of his current drive for tell stories.

Those stories about the past, about the origin, the tales of the town and the family, those memories and events that marked the history of her family, became the fuel that led her to walk the path of words.

(See: These are the women who won the La Cueva Short Story Prize in Barranquilla)

“It also has a lot to do with journalism, when you interview people you realize that they are beautiful or say beautiful things and they don’t know it until they read it,” he says.

What is the personal concept behind your proposal?

“I write what I can with what I have. I don’t write to win prizes, I write because I can’t do anything other than narrate. Acknowledgments are welcome, but after all that lasts a few moments, what you have to do is keep writing”

Childhood memories and the present

Yulieth remembers that at school she already read the basics, however, she always found it very boring, perhaps, as she herself says, it is because at that time, they made it boring. Another music began to play when he entered the university to study social communication and journalism, a more pleasant and entertaining one, one that provided him with the exact dose of interest and pleasure, which made him start reading seriously.

“I wanted to emulate the well-known authors, but I had nothing to say at the time, nor did I know how to do it. I graduated from the university and began to attend the local workshops and then the district ones, I went every Saturday without fail, I went through several teachers giving workshops and they taught me to read poetry, short stories and novels and after that there was no turning back”, he recalls with some nostalgia.

For the first time in 10 years, not only one writer wins the first place, the second was obtained by Laura Victoria Bolaño Pérez and the third place by Cinthia Lucía Vargas Caparrós.

(Of interest: Low lethality, one of the effects of anticovid vaccination in Barranquilla)

According to the author, on this never-ending road, creators look for many ways to narrate; perhaps a style, a way that makes them feel comfortable when telling, however, according to their own words, that comfort begins to annoy and the desire to do it in another way arises, look for other ways other possibilities.

“Last year they invited me to participate in a writing project during the pandemic and then they rejected me because they wanted a story and mine was a story, but with a poem-like structure. My story was a long list and they wanted prose. So, I reflected on the conventions of the structures since at this point in the match it is questionable, there are poems in prose and prose that are beautiful poems”.

You see her cinnamon, sweaty, with her thick mouth and the line of a scar asking you for everything that you are not yet capable of doing, of being. You see her confident with her hands in her back pockets. You see her reading looking for a word that you don’t know. You see her sincere summarizing a story that terrifies you. You see her frowning, looking at the past, running through the pain with her hands on the sheets. You see her naked, you see how her ribs rise on her fragile body, how they mark the paths of the air that she needs. You see her taking in that hot air, filling her lungs over and over again; And now you can’t stop watching it…

Your story is a story of diverse love, dissident, a love story that challenges the established molds, the romance between two women who are discovering the world, trying to understand what this is all about, peeking through its folds.

Do you feel influenced by ‘queer’ authors or authors?

I think that when I was starting to read I didn’t find many stories that came close to what happened to me, which was falling in love with another woman, and so I’ve spent the last few years writing about the world I live in, which is the world of a homosexual woman.

What do you give more importance to in a story?

I care a lot about the language and its economy and I care about it much more than the plot, but I try not to neglect any of them. The characters are always pulling where they want and one does what they say.

Do you think that the place of birth marks a style, a specific path, how much has the city in which you were born marked you?

Bogotá is my home and it is the place where I have everything and it has influenced me. However, in the last year I have had the opportunity to work at the SINCHI Institute touring the Amazon and I have been observing and learning a lot about this territory, I think that will mark my writing from now on.

Music has played an important role in their stories and in the poetics that run through their narrative. Yulieth assures that she has been building a playlist for many years, and not just any list of songs to write, she needs a very particular atmosphere, some sounds that accompany the impulse to tell that story, many times those beats, those harmonies, are tracks of piano that escape from his sound player to live in his head during the hours it takes him to shape what he wants to tell.

Other times and that depends on the nature of the story, its pulse, its drive, Yuliteh plays the album EUSA by Yann Tiersen or Solipsism by Joep Beving. Currently, he accompanies her on her creative adventures, the album of NickMurphy, titled, ‘Music for Silence’.

At this moment Yulieth is in her room, she has just turned off the light and decided to stay inside to listen in silence, the noises of the world that crackle outside, while she returns to dream of Jess, or perhaps a taste of orange, to michelada, cinnamon, apple brandy, strawberry bite, ripe pitaya, vodka cherry, poppy cake bite, or the simple alfajor of an afternoon…

Merchants of Barranquilla, with school supplies despite paper shortage

Bilingualism, the bet of schools in Barranquilla for 2022

‘I don’t write to win prizes, I write because I can only narrate’