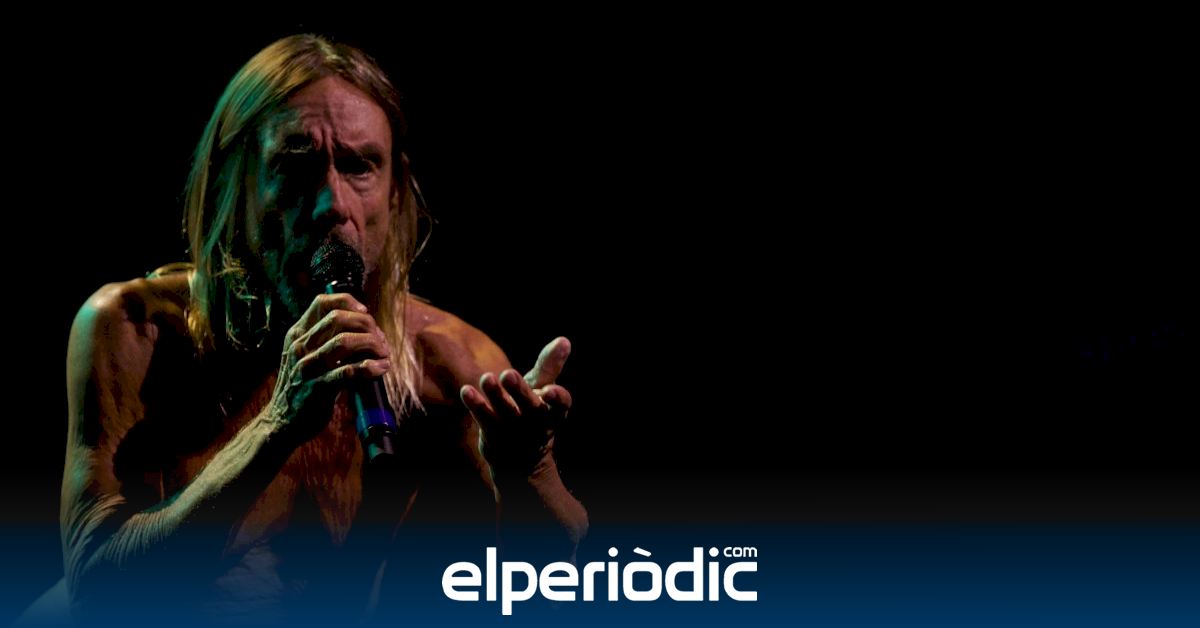 “I have waited several years, but I am back. I return to Europe from June. With this phrase and a brief greeting to his European fans, the legend Iggy Pop announces in a video the start of his new European tour starting in June with a stop in the Valencian capital. He does it about to turn 75 years old. And it is that next April 21 is the brilliant anniversary of a universal icon who will be remembered in the history of music as the undisputed and genuine “godfather of punk”.

After more than a decade without setting foot in Valencia, La Iguana will return to Valencian lands on July 21 at the international festival Diversity València Festival to be held in the monumental Ciutat de les Arts i les Ciències. The legendary artist will share a musical day with groups who are joined by a certain intergenerational transgression, such as Måneskin.

The Italian band, which has just sealed its American projection with its recent performance at Coachella, has openly declared the influence that Iggy Pop has had on its career. In fact, the version of his well-known theme I WANNA BE YOUR SLAVE alongside Iggy Pop has been compared to the song I wanna be your dog by the American musician.

Iggy Pop embarks on his tour after being awarded the prestigious Polar Music Prize 2022. Considered the Nobel Prize for Music, the international jury recognized Pop’s career from his leadership in the legendary band The Stooges to the present, marking the era of rock and paving the way both in their 19 studio albums and in their impressive and memorable live performances.

The official statement issued to announce the name of the winner included among its arguments that Iggy Pop’s aura and attitude “have helped light fires that have traced paths through the worlds of punk, grunge and generations of alternative music.” The bare-chested icon will collect his award in the city of Stockholm on May 24.

Part of these reasons are what have also led the Diversity València Festival to have the figure of Iggy Pop in its headliner since, among the objectives of the great event, is to bring together in the same event figures who have been or are being an inspiration for social movements around the world in favor of diversity. Thus becoming the music scene that mixes popular phenomena of mainstream culture plus international presences that have brought about a revolution in their genres and that, in most cases, are attached to some type of social message, as is the case with Pop .

The most equal Festival

Thus, Diversity València Festival, which will be held from July 21 to 23, has among its names —along with the aforementioned Måneskin who will give his only announced concert in Spain for 2022— to the mysterious phenomenon HER, for the first time in Spain and the only concert that the artist will give in 2022 throughout the country.

The young multi-instrumentalist who has won 5 GRAMMYs and an Oscar is one of the current maximum representatives of R&B. Remembered for her impressive performance at the last GRAMMY Awards gala alongside Lenny Kravitz and Travis Barker, she HER she also stands out for her strong social commitment and her active role in the Black Lives Matter anti-racist movement: The video of your theme I Can’t Breathe won the MTV VMA for best audiovisual production with a social message.

Next to her, transgressive presences like that of the queen of Afrobeats, Tiwa Savage. A musical genre — Afrobeat — that was born linked to a strong social movement in Nigeria and Ghana and that has subsequently spread throughout Africa and the world with Savage as its greatest female exponent.

In the same line of breaking molds in its genre is Coffee. The very young artist, who has also just made her way through the renowned Coachella, has a GRAMMY for Best Reggae Album. She is the only woman in history and the youngest person to win this award. Koffee’s concert will also be an exclusive performance in 2022 for the Diversity València Festival.

Ezra Furmanqueer icon of contemporary pop music for having composed and performed the original soundtrack to the hit Netflix series Sex Education, is confirmed as another of the most transgressive presences. The artist, who has recently begun to name herself as a proud trans woman, has become a icon for oppressed identities. According to the prestigious newspaper The Guardian, Ezra Furman’s performances are “the most impressive live show you can see right now”.

Strong international presences such as Christina Aguilera, Martin Garrix, Black Eyed Peas, Nicki Nicole, Armin van Buuren or AURORA form a cartel that, without a doubt, has the characteristic of being the most equal and diverse of the year.

The Ciutat de les Arts y les Ciències will witness the largest international mix to date. Added to this attraction is the expectation to see Iggy Pop make history on stage at 75 years old. Singing in unison the innumerable hymns of his long career and being contaminated by his irreverent intensity.

As the music journalist Carlos Pérez de Ziriza writes in this article dedicated to the artist, Iggy Pop is the man of a thousand lives. And what better than music to celebrate and celebrate us.

Tickets for the Diversity València Festival can now be purchased through See Tickets and on the festival’s website: diversityvalencia.es.