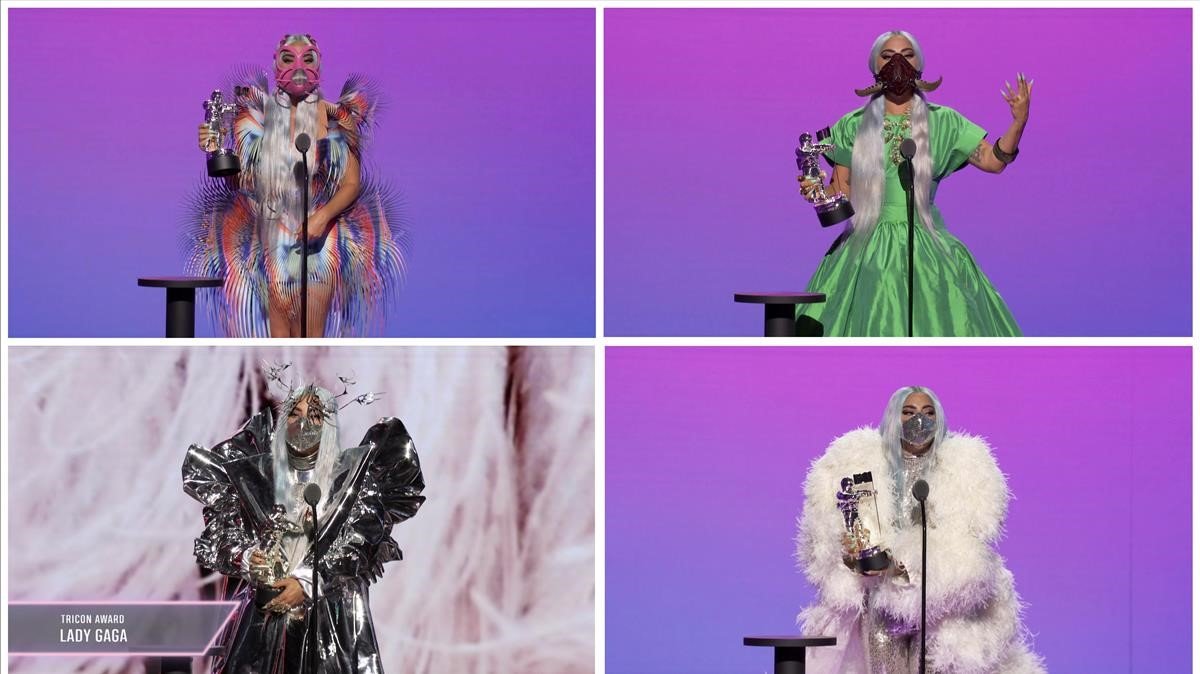 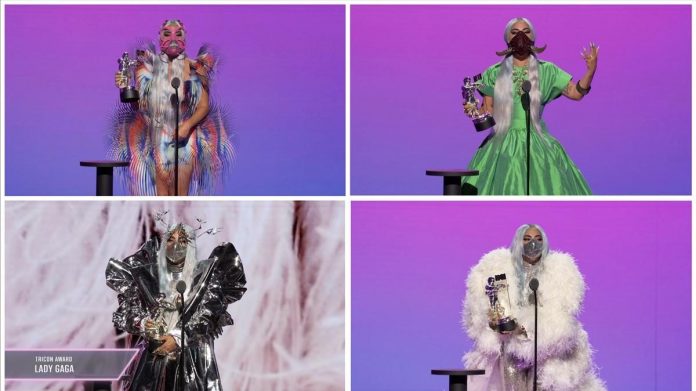 Lady Gaga was the main protagonist of the delivery gala of the MTV Video Music Awards (VMAs) of 2020 not only for the five awards she took home, including Artist of the Year, but also for the striking and original masks that the New Yorker wore in each of her multiple appearances during a night of social distancing.

The first that caught our attention was a large pink mask with wires and metal mesh, but later it made an even bigger impact with another black one that covered practically the entire face and that had a small screen of lights that changed color in the front area, and more. later with a leather one decorated with long horns on the sides and metal spikes.

Those were just three of the many that he used to collect his five awards that he was awarded at a ceremony held in New York clearly marked by the coronavirus pandemic, in which many of the acceptance speeches were pre-recorded, and also part of the performances.

During the gala, which at times moved to different New York neighborhoods, such as Manhattan, Brooklyn or the Bronx, for live performances outdoors, although with hardly any audience present, Gaga was named Artist of the Year, and won three awards for “Rain on Me”, his project with Ariana Grande: Best Collaboration, Song of the Year, and Best Photography.

In addition, he bagged the first “Tricon” award given at the VMAs, which recognizes the talent of an artist in three or more different disciplines.

“Everyone who knows me knows that I have a mission to bring joy through culture, dance, music,” Gaga said during the ceremony.

For his part, The Weeknd won the most coveted award of the night, Best Video of the Year, for Blinding Lightswhich also earned him the award for Best R&B Video.

The Canadian, however, showed a very serious face receiving the awards, and reflected the wave of protests that are taking place in the United States due to racial injustice.

«Once again, it is difficult to celebrate. Justice for Jacob Blake and Breonna Taylor », she said the two times she came out to receive her The Weeknd award, which referred to two of the deaths of African Americans at the hands of police officers that have shaken American society this year.

Ariana Grande was also one of the lucky ones of the night, who, along with the success of “Rain on Me”, was awarded for her collaboration with Justin Bieber on “Stuck With You”, which won in a category created by the pandemic: Best Video Made From Home.

The South Korean group BTS did not have a bad night either, since it won three awards for its video clip Oh, in the category of Best Pop, Best K-Pop and Best Choreography, and was also named the Best Musical Group.

Meanwhile, the award for Best Latin Video went to Maluma and his What a pitywhich he picked up shortly after singing his new single “Hawaii” from Brooklyn on an outdoor stage surrounded by cars, with a few lucky fans watching him.

“It’s incredible that J Balvin and I, who made this song, came out of Medellin, Colombia,” said Maluma, dressed in yellow, in his acceptance speech, recalling his compatriot’s collaboration in the piece.

As a curiosity, in the technical categories, which normally recognize filmmakers, photographers and editors, Taylor Swift won the award for Best Direction for TheMan, although his acceptance speech was in the form of a pre-recorded video message, as did most of the award-winning artists.

At the beginning of the gala, the presenter Keke Palmer, the first African-American woman to present the MTV VMA alone, wanted to dedicate the gala to the recently deceased actor Chadwick Boseman, whose death has shocked the entertainment world of the United States.

Presented from the iconic Empire State Building, the ceremony began with the impressive performance of The Weeknd, who sang his “Blinding Lights” from the “Edge”, a huge balcony suspended 345 meters above Manhattan, while behind him could be seen the skyline of New York skyscrapers and a fireworks display from the Hudson River.

Shortly after, Miley Cyrus sang “Midnight Sky”, and, on top of a huge and shiny disco ball, paid tribute to the famous video clip of “Wrecking Ball”, which recently turned 7 years old, while Lady Gaga and Ariana Grande starred in the first interpretation of “Rain on Me” on television, both protected with a mask.

The K-Pop group BTS was another of the highlights of the night, as they performed for the first time at the VMAs, and also debuted their single “Dynamite” on television, a song with which they have premiered singing in English.

Also debuting on the MTV VMA stage was the Latin group CNCO, who presented their single “Beso” for the first time on the same stage as Maluma in a colorful show animated by fireworks.

In the absence of a red carpet this year, for an hour and a half before the start of the show, the VMAs were reviewing some of the most popular looks from previous editions, such as the meat dress that Lady Gaga wore in 2010, or the daring look Cher’s rocker from that same year.

Independent journalism needs the support of its readers to continue and ensure that the uncomfortable news they don’t want you to read remains within your reach. Today, with your support, we will continue to work hard for censorship-free journalism!