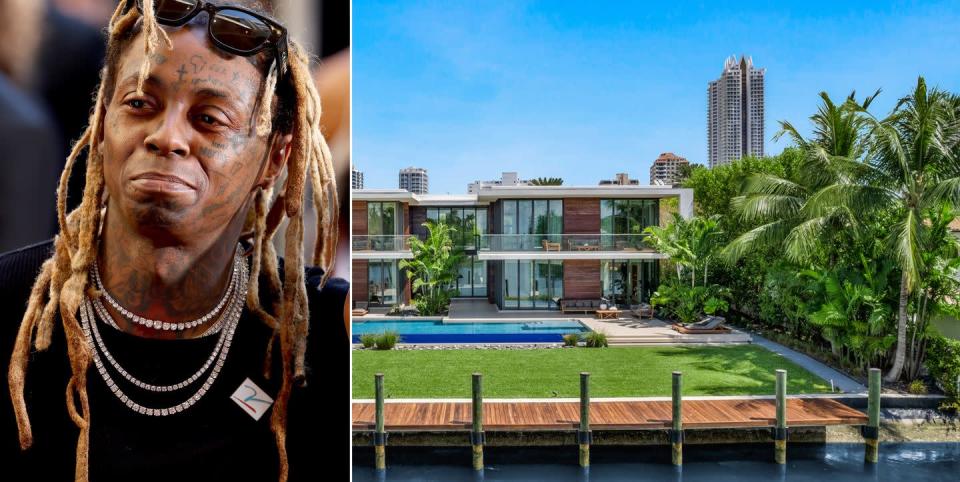 Lil Wayne is one of the hip hop artists most influential of his generation, considered one of the best rappers of all time. Did you know that he started writing songs when he was only eight years old? No wonder he has won 5 Grammy Awards, 11 BET Awards, 4 Billboard Music Awards, 2 MTV Video Music Awards, and 8 NAACP Image Awards.

With 120 million records sold worldwide, Lil Wayne is also one of America’s most commercially successful artists. In 2005, he founded his own record label, Young Money Entertainment, which has released 14 albums that reached No. 1 on the Billboard charts. In addition to Wayne’s current work, the label represents Nicki Minaj, Mack Maine and Lil Twist.

But such a successful rapper needs a home to match his triumph, and Lil Wayne’s Miami Beach home certainly is. Or rather, it was, because the artist has just put it up for sale for 3 million euros.

The living room has sliding doors glass doors that open to a large terrace, plus floor-to-ceiling windows that access the luxurious backyard.

The property is also home to a large swimming pool, several outdoor dining spaces, a barbecue grill and a hut with direct access to the white sand of the island’s private beach. There is also a movie theater, a wine cellar, an elevator, a private dock and a three-car garage.

The community has 24-hour guard service and the added security of being surrounded by water on all sides. Located northwest of Miami Beach, the home is close to La Gorce Country Club and Normandy Shores Golf Club, both located on neighboring islands. Miami Beach’s public beaches, nightlife, famous art galleries, luxury shops and world-class restaurants are just a few miles away. The area is home to numerous celebrities including Pitbull, Sylvester Stallone, madonna Y Shakira.