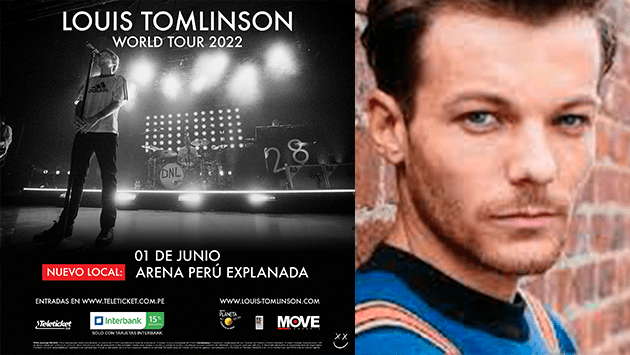 The company Move Concerts, creator of the most memorable musical experiences in our country, confirmed the new venue for the long-awaited show of the young idol Louis Tomlinson (ex One direction), who broke sales records by selling out in a few hours last year. The new location chosen will be the Arena Peru Esplanadelocated in Av. Manuel Olguin 200 (next to Gate 7 of the Jockey Plaza), this change will allow thousands of fans who stayed out of the show to get a ticket for the event on Teleticket.

The tickets that the producer has put in stock will only be for Campo A and Campo B zones, since the grandstand is full. On the other hand, they emphasize that the sale will only be on the Teleticket digital platform from April 13 at 9AM. The concert will have a 15% discount with Interbank cards. The sale will be enabled until the total capacity of the show is exhausted.

*Prices with 15% discount, include Teleticket commission.

Last year, Louis Tomlinson announced his first world tour in support of his debut solo album, “WALLS,” to critical acclaim, who called it one of pop music’s biggest surprises. To date, Tomlinson has recorded an astonishing 1 billion streams on Spotify, as well as a massive social media following of more than 54 million fans. And it is that the artist moves very well on these platforms and shares various moments of his career, to the point of having broadcast live concerts to raise funds for charities.

Former member of one of the greatest phenomena in music history, One Direction, Louis resumes an extensive world tour interrupted in March 2020, which will tour the United Kingdom, Spain, France, Germany, the United Arab Emirates, Indonesia, Australia, Japan , Argentina, Brazil, the United States and now Peru. In August 2019, Tomlinson won “Best Song – Male Artist” at the Teen Choice Awards with “Two of us”, the first single from WALLS, which has amassed over 40 million streams and over 23 million of views on YouTube.

Louis Tomlinson’s world tour arrives in Peru thanks to MOVE Concerts, producer of concerts such as Ed Sheeran, Shawn Mendes, Justin Bieber, Katy Perry, Jonas Brothers, among other young stars. Everything ready to relive the magic of the concerts of the great international stars in the country.

Learn more about the artist on his official website: www.louis–Tomlinson.com