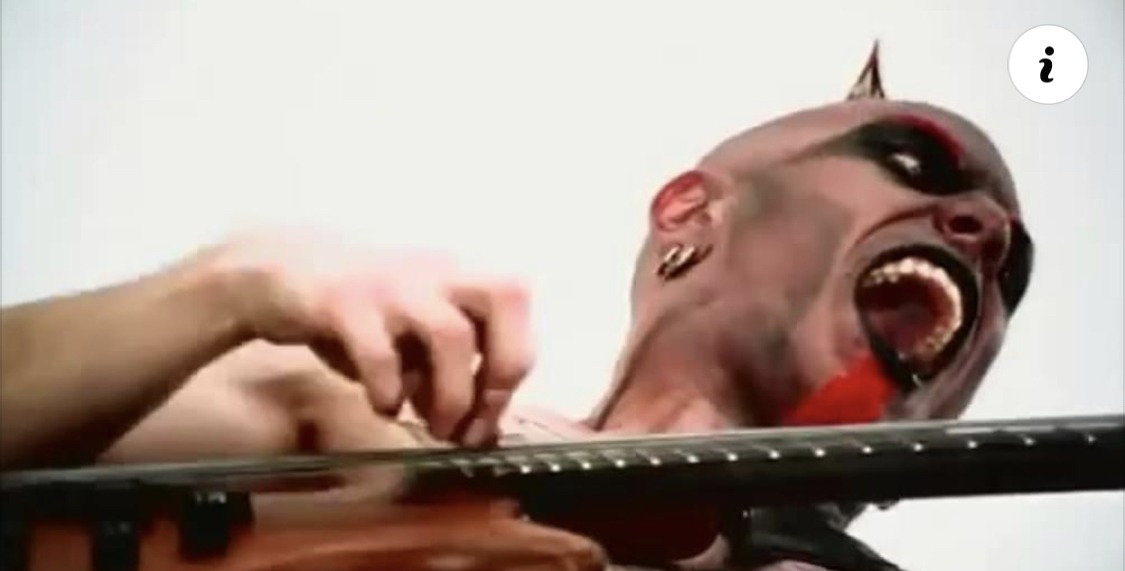 Mudvayne’s “Dig” is simply outrageous. The song crackles and pops as if the Red Hot Chili Peppers were roasting over the open flames of Slipknot’s “Psychosocial” video. It’s funk from hell. Nu-metal meets “math metal,” the band’s somewhat tongue-in-cheek description of their sound. And the music video for “Dig”? It’s a Technicolor nightmare starring what appears to be four Dr. Seuss characters gone horribly wrong, as if The Lorax’s toxic apocalypse spawned a quartet of demonic mutations: Kud, Gurrg, Ryknow, and sPaG. For better or worse, both the LD 50’s lead single and its iconic image are forever embedded in the subconscious of everyone who has participated in them. Mudvayne may never get back together, but at least we’ll always have “Dig.” Here are five things you may not have known about the song and video.

1. “Dig” is about the dark side of the music industry
Mudvayne had already been around for four years and self-released an EP, 1997’s Kill, I Oughta (later re-released as 2001’s The Beginning of All Things to End) before signing with Epic and offering their proper debut, LD 50. At the time, everyone was all too familiar with how dirty the music industry can be, and “Dig” was the sound of their attacks. “It was that introduction to the world of music,” singer Chad “Kud” Gray told Songfacts about the song in 2015, “seeing the business and being so green you didn’t get it. You had to learn the hard way. You’ I’m starting to get a very clear idea of ​​what the business is, how corrupt it is. People put their grain of sand in your art that has nothing to do with art on any level; they are completely business, but they think they know what is best for you. It’s, ‘I’d love to punch any motherfucker in the face who’s thinking they can change me.’ That’s the opening line.”

2. Mudvayne was under extreme pressure while recording “Dig” and LD 50, and the studio sessions were all work and no play.
Secluded in Vancouver’s The Warehouse Studio with producer Garth “GGGarth” Richardson (Rage Against the Machine, L7), Mudvayne toiled away while making LD 50. “It was the most horrifyingly beautiful experience I’ve ever had,” recalled drummer Matt “sPaG McDonough. “It was very, very exhausting, very psychologically exhausting, but it was also amazing to bring your vision to life at that level, to have that kind of team available to you and the experience of a producer like Garth. We worked day and night, and some of the engineers we had with us literally went days without sleeping. It took a long, long time. We weren’t partying. We were shooting in Vancouver but we couldn’t see the city, we were just there. and we worked and that was it. It was very intense, and Garth was up to the task.” Gray agreed: “Making the record was crazy. It was all a matter of work.”

3. The “Dig” video was directed by the same guy who directed Slipknot’s “Wait and Bleed” and Sepultura’s “Roots Bloody Roots” videos, and it was shot over two very long days.
Mudvayne worked with director Thomas Mignone, who has also directed music videos and concert films for Ozzy, Slipknot, System of a Down, Sepultura, Type O Negative and many more, on the “Dig” video, shooting it in LA across two 11- hours plus days. Much of the time was spent putting the boys in their elaborate makeup, with each member of the band filming multiple takes, to the point that McDonough’s left hand was bruised and swollen by the morning of the second day from banging against it so hard. their top hats while filming. the drum parts of it. The band gave fans a behind-the-scenes look at the making of the video in the “Dig a Little Deeper” article below, taken from the 2001 “Dig” DVD single.

4. Rhys Fylber of Frontline Assembly Created Two Remixes of “Dig,” One of Which Charted in Canada
As well as containing Mudvayne’s 1997 EP, The Beginning of All Things to End also featured two exclusive remixes of “Dig” by Frontline Assembly’s Rhys Fulber, who has also remixed Fear Factory, Machine Head, Megadeth and a host of others. metal bands. One of their danceable, industrialized new versions, “Dig (Future Evolution Remix),” even charted in Canada, reaching No. 23 on the singles chart. As for the other, “Dig (Everything and Nothing Remix)” would appear on the soundtrack of the 2002 film Resident Evil along with remixes by Slipknot, Marilyn Manson and more.

5. The “Dig” video beat out clips from Gorillaz, Alicia Keys, Jurassic 5, Craig David and India. Arie at the 2001 MTV Video Music Awards
Broadcast live from New York’s Metropolitan Opera House on September 6, the 2001 MTV VMAs saw the Gwen Stefani, Moby and Eve-era lineup take the stage to present the first-ever fan-voted MTV2 Award (? remember MTV2?). Mudvayne took home Moon Man, beating out Gorillaz, Alicia Keys, Jurassic 5, Craig David and India.Arie, and accepted the trophy in sleek white suits with bloody bullet holes in their foreheads. “It’s all about that: the fans,” Gray said in his acceptance speech, expressing a sentiment that McDonough reiterated: “This is for the fans. It is not our”. Watch the award presentation below, an almost otherworldly flashback to the halcyon days when made-up metal maniacs regularly shared the spotlight with rappers and pop stars.