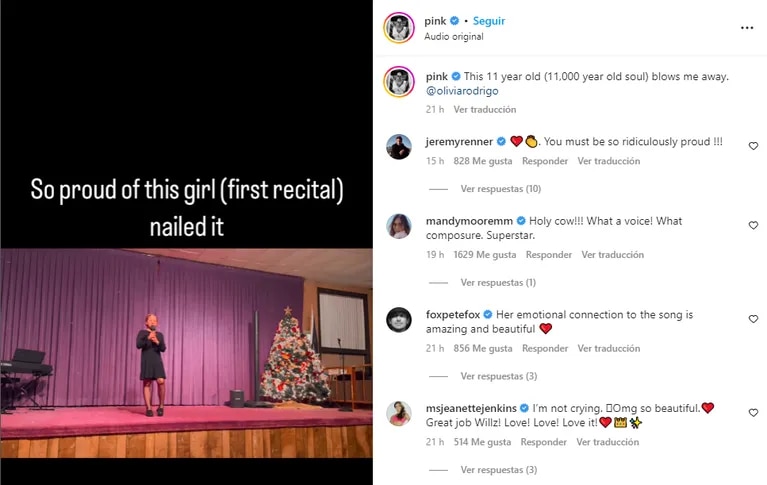 Pink He posted on his social networks a video of his daughter singing at an event. Willow Sage Hart, 11 years old, she gave her first recital and her mother did not hesitate to share it with her followers who were surprised by her particular voice.

“Rose Song” of Olivia Rodrigo, who was part of High School Musical, was the song he chose to perform in the auditorium. Willow sang the ballad effortlessly and when she finished she received loud applause from the audience. “This 11-year-old girl (11,000-year-old soul) leaves me speechless”Pink wrote excitedly hearing her daughter sing.

This is not the first time that the little girl has shown her artistic talent. In February of last year, mother and daughter made a version of “Cover Me in Sunshine”. “In 2020 we experienced many things. Sad, lonely and scary. He was also calm, thoughtful and we learned a lot. With Willow we find solace in music, so we are putting out this song which we hope will also bring you sweetness, sunshine and comfort,” Pink wrote.

In 2018, PInk participated in the soundtrack of “The Greatest Showman” and shared a clip singing “A Million Dreams” along with Willow, who was 7 years old at the time.

The star also has another son, Jameson Moon Hart, five years old, with her husband Carey Hart. Recall that the couple married in 2006, five years after they met at the 2001 Summer X Games.

Last year, the women’s beach handball team she was penalized for playing in shorts. The singer expressed her solidarity with the athletes and her reaction went viral. Each of the players of the team was fined after rejecting the regulations that involve wearing bikinis to play. The rule requires the use of a garment of less than 10 centimeters, and the measure on clothing only reaches women. The European Federation sanctioned them with 1,500 euros, which is equivalent to 150 per player.

Pink sympathized with the girls and offered to pay the penalty. “I am very proud of the Norwegian team for protesting against the very sexist rules about his ‘uniform’. The European Federation should be fined for sexism. Good for you girls. I will be very happy to pay the fine. Keep it up, ”she said on her Twitter account.

Alecia Beth Moore, her real name, sold more than 50 million records worldwide and is one of the singers with the highest sales. She has won three Grammy Awards, six MTV Video Music Awards, and two Brit Awards.

He rose to fame with the single “There You Go”which was part of his job Can’t Take Me Home, in April 2000. The following year they sounded “Get the Party Started”, “Don’t Let Me Get Me”, “Just Like a Pill” and “Family Portrait”.

His fourth album I’m Not Dead (2006) had hits like “Stupid Girls”, “U + Ur Hand” and “Who Knew.” Her next studio work featured the hits “So What”, “Sober”, “Please Don’t Leave Me” and “Glitter in the Air” which she presented on an extensive tour. For example, their seventh album Beautiful Trauma (2017) was the third best seller of the year.

The death of Lisa Marie (54), the daughter of Elvis Presley, which enlarges the dramatic family lege...
Oscar 2022: Billie Eilish and Beyoncé enter the list of candidates for Best Original Song
Christina Aguilera supports Britney Spears: "Every woman should have the right to her own body, her ...
Tweet
Share
Share
Pin
Other links: https://awardworld.net/resources/