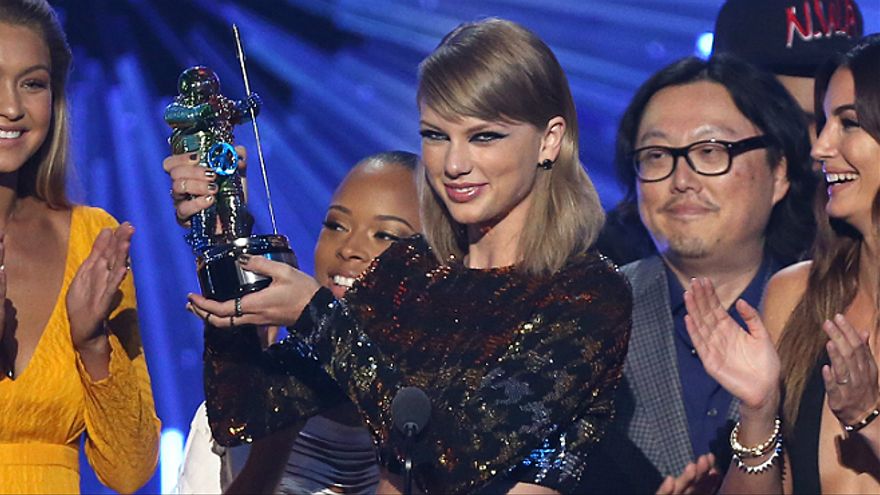 A speech of more than ten minutes of the rapper kanye-westin which he announced that he will run for president of United States in 2020, and the extravagances of the singer and emcee Miley Cyrus they marked last night gala of the MTV Video Music Awards (VMA) held in The Angels.

The awards have crowned as queen of the night Taylor Swiftalthough the VMAs have shown for another year that their importance lies more in the drama that accompanies their protagonists, than in the importance of some awards whose winners are chosen by the votes of the fans.

Swift has won three statuettes, including the best music video for ‘Bad Blood’ -the most relevant of the evening- and has been in charge of delivering the honorary Michael Jackson Video Vanguard award to Kanye West six years after the singer ruined his moment of glory precisely in other MTV VMAs.

In 2009, West took the stage at Radio City Music Hall in New York just as Swift was celebrating her win for Best Female Music Video for ‘You Belong With Me’ to show her anger at the fact that the public had preferred that work in front of ‘Single Ladies’ of Beyonce.

On Sunday, now from the Los Angeles theater microsoft (formerly Nokia), Swift has recalled that moment that was all the rage on social networks and showed her admiration for West, who shortly after took the floor to make a heartfelt speech – but scattered – of more than 10 minutes in which he never got to ask for forgiveness. The rapper, who on this occasion was kind to Swift, has seemed to express some remorse, although what initially sounded like an apology ended in justification.

“The problem was the contradiction. The contradiction is that I fight for the artists, but in that fight I was disrespectful to the artists in some way,” said the singer who attended the event accompanied by his wife, kim kardashianand several more members of that media family.

In his statement, during which he acknowledged that he had smoked some substance before going on stage, he explained that he does not understand the purpose of the award galas, he stated that the important thing is “people with ideas, people who believe in the truth ” and he said goodbye with a declaration of intent. “I have decided that in 2020 I am going to run for president (of the USA),” he said.

“We already know what happens when Kanye West smokes marijuana“, Miley Cyrus, in charge of leading the ceremony in which she lavished her foul verbiage, said next, and who has declared that she shares West’s love for Kim Kardashian, especially for her nipples. “(Donald) Trump, you had my vote, but now Kanye West for president!” Cyrus added.

The artist who in 2013 shocked many at the MTV VMAs with a very sexual performance managed to show the audience one of her breasts during a brief connection in the middle of a publicity block and put the final touch to the gala with the presentation of an unreleased song included in her next album, ‘Miley Cyrus and Her Dead Petz’.

Cyrus, in fact, made his work known and surprised by proclaiming that from that moment the album was available for free download.

Not everything was good news for the former Disney child star (Hannah Montana), who has seen how at another moment of the ceremony Nicki Minaj, who won the award for best hip hop music video (‘Anaconda’), has reprimanded him with harshly criticizing her in the newspapers. Cyrus has saved the disagreement as she could by blaming the press.

Minaj, however, has seemed to have made peace with Taylor Swift, with whom she had a recent exchange of statements through social networks after expressing her frustration that her ‘Anaconda’ did not dispute the category of best music video of the year , unlike Swift’s ‘Bad Blood’.

Both turned the page and shared the performance that served to start the awards ceremony, in which they hugged each other. At the gala you could also see a sorry Justin Bieberwho burst into tears after his performance.

The list of winners has included Fetty Wap for Up-and-Coming Artist (‘Trap Queen’), Big Sean for Best Video with a Social Message (‘One Man Can Change the World’), and 5 Seconds of Summer for ‘She’s Kinda Hot’. as best song of the summer.