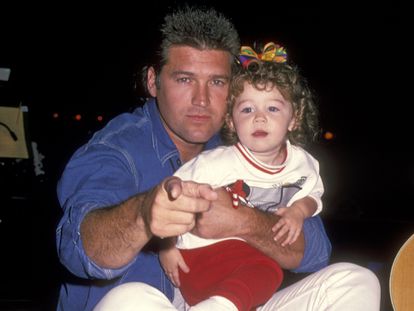 Miley Cyrus (Tennessee, USA) has been surrounded by spotlights since she was very young. His father’s fame billy ray cyrus (Kentucky, USA, 61 years old) as a country music star and actor, led her to be present in many sets of filming and even to star in a scene from Doc (2001-2006), series in which he played a rural doctor. In 2006, the young woman began to monopolize the afternoons of the little ones with the series Hannah Montana. Fame came to him very quickly and, since then, he has not stopped being at the center of the news. Now turned into a global pop star, Miley Cyrus turns 30 this November 23, three decades in which the artist has given good —and controversial— moments and has marked the childhood, adolescence and maturity of thousands of fans who have followed his career from the beginning.

Although everyone knows her as Miley Cyrus, it is not her birth name. Her parents, Leticia Jean Finley and Billy Ray, named her Destiny Hope. Always smiling since she was a baby, they decided to nickname her smiley. Over the years, that nickname was shortened to Miley and it was the definitive name she chose in her artistic career.

At just eight years old, he decided that he wanted to dedicate himself to the acting and show business. She began to audition for various roles, but was always rejected due to his young age. Finally, at the age of 11, showed up for a casting from Disney… And the rest is history.

But not everything was easy. In the first audition she was rejected, but after much insisting, and thanks to the skills that she demonstrated as a singer, she finally got the leading role. The Serie Hannah Montana, which told the life of a young pop star leading a double life, became an unprecedented hit at Disney up to that point. Four seasons and one movie later, it ended in 2011. In 2008 alone, The Life of Miley Stewart had a global audience of more than 200 million viewers. Five years of broadcast in which it obtained numerous nominations and awards: Miley Cyrus was nominated four times for the Emmy Awards for best children’s program, and managed to win more than 20 awards. Hannah Montana: The Movie (2009) It obtained a collection of more than 150 million euros at the worldwide box office.

Disney knew how to make the most of the pull: records, concerts, products of the protagonist… anything was worth it and the fans bought everything. She was the icon of the moment. But most things have an end, and the artist decided in 2010 that the time had come to stop being Miley Stewart and her alter ego Hannah Montana.

The artist’s life —as far as music is concerned— did not stop while she was recording the series. In 2007 she began to publish her first songs away from the Disney fiction. She released her first solo album of hers, Meet Miley Cyrus; It was followed by his second album, breakoutwhich was a complete success – it managed to be a platinum record (more than a million sales) in the United States – in part thanks to one of its most remembered songs: 7 Thingswhich he dedicates to his ex-partner Nick Jonas. Years after its release, critics continues to defend that it is the best album of the artist so far.

2010 was a year of changes for the artist. She had taken off her Hannah Montana wig and had decided that she was going to focus on a more rock style. At 17 years old, she decided that it was time to reconvert her career and think about a different future in the music industry. That same year, she published Can’t Be Tameda theme with which he reaffirmed the 180 degree turn that his life had taken.

2013 was one of the most controversial years for the American artist. Completely focused on her musical career and on continuing to show other facets of her life, the most representative change for the new Miley came: her haircut, which made it clear that the old Miley had disappeared forever. The interpreter left behind her long Disney princess hair to show the most rebellious and powerful version of her that we know today with a punk-style hairstyle.

In June of that year, he published a commented and controversial song, We Can’t Stop. Days after the premiere, many media echoed some of the phrases that the theme included: “Dancing with Molly” or “get a line”. molly is an urban term to refer to ecstasy and “get a line” is a line of cocaine. And they were not mere interpretations. It was the interpreter herself who confessed that the song was about drugs. In August, public Wrecking Ball, a subject directed towards the one who had been his partner until that same year —later they would resume the relationship—, the actor Liam Hemsworth. In the video clip, she appeared on a wrecking ball, naked, while crying to heartbreak. An image that immediately became pop history. Such was the impact that it generated that it became the most viewed video clip of the year.

The controversy did not end here. At the end of August, the artist starred with Robin Thicke in one of the performances that will go down in the history of the MTV VMAs: the twerk that Cyrus dedicated to the singer. Many people, through social networks, described the moment as “inappropriate”. It was shown that the artist wanted to get rid of all her past as good girl and show your true self. Months later, at another event organized by MTV in Amsterdamhe smoked a joint on stage, returning to be the center of all criticism. US media, such as USA Today, described the event as an “attempt to attract attention.”

Since her first break with Liam Hemsworth in 2013, the singer has been linked to Jared Leto or Patrick Schwarzenegger. But in 2015 she revealed that she also liked to have romances with people of different sexes and genders. Thus, she confirmed her pansexuality: she falls in love with people’s souls regardless of the body that houses them. That same year, she had a relationship with model Stella Maxwell and even sexual videos of the two were leaked.

Over the years, Cyrus has grabbed many headlines, most stemming from her courtship with Australian actor Liam Hemsworth. A relationship with more shadows than lights and that lasted 10 years, in an interrupted manner. After her first break in 2013, the artist explained in her song Wrecking Ball everything they experienced during the four years they were together and how the separation was. In 2016 they resumed a relationship that seemed to be destroyed after what they experienced in 2013. Everything seemed to be going well between them and even they got married in 2018. But the marriage it lasted only eight months and their paths parted again.

Forgotten her time at Disney, the singer continued to focus on developing her own style, sometimes more rock, sometimes more pop. In 2021, she became the first artist to come out of the franchise to perform in the Super Bowl preview, although not in the interval most coveted by all artists. And on top of that, doubly, by doing it again a year later.

For years, Miley Cyrus and Billy Ray Cyrus were the hallmarks of an idyllic father-daughter relationship. However, in recent months this union has broken down. It all started with the divorce of her parents after more than 29 years of marriage and three children together in April of this year. Months after the news, it became known that Billy Ray Cyrus was beginning a relationship with the 28-year-old artist Firerose. Just a few days ago the couple made their engagement official. A relationship that would have completely dynamited the good harmony between father and daughter who, in fact, no longer follow each other on social networks.

Miley Cyrus has always been the owner of her life after her time at Disney, without caring what they say or the consequences that her actions could have. Now, she has established herself as one of the musical icons of this century. And she will continue to talk about, she always does. At the moment, she will be in charge of giving the chimes of 2023 together with her godmother and her singer Dolly Parton for the American television network NBC. And next year comes with new music from Cyrus. What will she surprise with this time?

The 30 years of Miley Cyrus: from a Disney girl to a rock icon