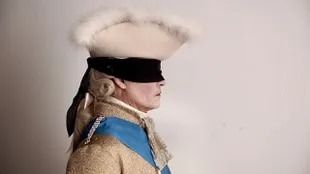 It was a rumor for days, but no one confirmed it. And on Sunday night, within the framework of the MTV Video Music Awards, Johnny Depp he had some very brief appearances, but they instantly became the most talked about moments of the night. In this way, the actor continues in his quest to return to Hollywood, after the favorable ruling he received in the trial that pitted him against his ex-partner. Amber Heard.

After a commercial break, the broadcast of the awards returned with a very iconic image for MTV. It was about the Man in the Moon, a true symbol of the early years of that channel. But to everyone’s surprise, Depp’s face was on the helmet’s visor, simulating an effect in which the actor seemed to be inside the suit. Through a previously recorded message, and floating over the heads of the guests at the awards, that astronaut Depp had a small handful of appearances throughout the evening, in which he humorously referred to his professional present. On one of those occasions, Johnny said, “I just want to let you know that I am available for birthdays, bar mitzvahs, weddings, wakes, or whatever you need.” In another of those messages, he assured: “You know what? The truth is that I need to work.”

From his Instagram account, Depp shared the images of his brief participations, along with a text in which he wrote, “guess who?”. In the networks and live from the place where the MTV Video Music Awards took place, the public mostly accompanied this appearance of the actor, through applause or messages that celebrated his interventions.

Little by little, and after the favorable sentence he received in court, Depp goes ahead on his return to the cinema and to the media agenda. The first project that Johnny has in the pipeline is Jeanne duBarrya piece directed by Maiwenn. This film will tell the story of Louis XV’s last royal mistress at the court of Versailles. The working-class woman begins to use her intelligence and charm to climb the social ladder. She quickly catches the attention of the monarch, who is unaware of her social status and both fall madly in love. In that project, the actor will play Louis XV, and in a promotional photo he appeared characterized as his character, blindfolded, with white hair and makeup.

The second film finds the interpreter in the role of director. It is a feature film named after Modigliania biographical drama based on the figure of the Italian painter, Amedeo Modigliani. Through a statement that accompanied the announcement of this project, Depp communicated: “I feel incredibly honored, to bring Modigliani’s life to the screen with genuine humility. It is a saga of enormous sorrow, but also of eventual triumph, and a life story that all viewers can relate to.” At the moment, it is still unknown if Depp will also star in the film.

Finally, many fans of the saga fantastic animalss, they are excited about the possibility of a return of the actor to the franchise, to resume his Grindelwald character. And to a great extent, that expectation resurfaced when Madds MIkelsenwho replaced Depp in the third part of the saga, acknowledged that he would not be surprised by a return of Johnny. In that sense, Mikkelsen declared: “Things have now changed. He won the court case, so we’ll have to see if he comes back. It may be so. I am a big fan of Johnny. I think he’s an amazing actor, and I think he did a fantastic job.”