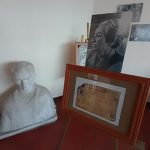 The young poet taught classes at the former Liceo de Niñas in the city, beginning here to publish her first verses under her well-known pseudonym.

On the morning of Wednesday, January 11, 1911, a 21-year-old girl who had been invited to the northern city to teach at the then Liceo de Niñas (current Marta Narea ).

Her name: Lucila Godoy Alcayaga. As we commemorate this Thursday, April 7, 133 years since the birth of the Nobel Prize in Literature, we remember the crucial passage of Mistral through Antofagasta when she was just a young teacher who, despite her ephemeral stay, marked those who were the students of she.

Born in the town of Vicuña in 1889, Godoy Alcayaga began writing verses from her childhood. In turn, the young woman began her teaching life as an assistant teacher in 1904 at the Compañía Baja school in La Serena. In 1910 she validated her knowledge before the Normal School No. 1 of Santiago and obtained the title of “State teacher”, with which she was able to teach in secondary school. Prior to her arrival in the north, the poet had been practicing her profession in the south, specifically in Traiguén.

Lucila Godoy arrives in the city aboard the “Panamá”, a small ship that made the journey between Valparaíso and Guayaquil. She began her relationship with the Girls’ Lyceum, which was directed by her friend Fidelia Valdés.

It is in this period that the young woman begins to publish her first verses in El Mercurio de Antofagasta under the pseudonym that (except for a small modification that she would make in the future) would make her recognized worldwide to this day.

In this regard, the researcher and former academic of the Universidad Católica del Norte (UCN), Isidro Morales Castillo, says that “the then reporter and later director of El Mercurio, Fernando Murillo Le Fort, invited her to visit the newspaper. Three days later she published her first article as a contributor. The writing, titled ‘Navigando’, collected impressions achieved during the boat trip. On February 1, she published ‘Las Escuelas del Bosque’, with veiled criticism of the Chilean educational system, which she described as ‘backward and oriented towards mediocrity’. An important contribution of hers was the story ‘El rival’, occasion in which she used the pseudonym of Gabriela Mistraly for the first time. With a final ‘and’, as Mario Bahamonde emphasized in ‘Gabriela Mistral in Antofagasta. Years of forging and bravery’, although sometimes she still used her real name”.

Likewise, for the researcher, the writer’s passage through the city was not just a mere stopping point in her life, but she also cultivated friendships with notable personalities who are now recognized as great sons of the city.

In this sense, Morales says that “his work at the high school was carried out with devotion, the creative passion of a very personal literature and a different human relationship with each person. In addition, he cultivated friendship, among others, with Bishop Luis Silva Lezaeta and Zacarías Gómez, an important Spanish merchant who directed important social institutions in the city”.

Gabriela left the city in 1912 to continue her teaching career in Los Andes. But this was not a final goodbye. On September 4, 1954, after 16 years away from Chile, Lucila Godoy Alcayaga briefly visited the city.

In this regard, Morales explains that for that opportunity “students from educational establishments paid tribute to the Nobel Prize for Literature, who was returning to the country after completing consular work together with her literary creation. The activity was carried out in the port facilities, an occasion in which she, due to an unspecified illness, did not go ashore, appreciating the act from the ship that was transporting her to the central zone of the country. The last time that Antofagasta received Gabriela Mistral was on January 19, 1957, when the plane carrying her remains made a stopover at Cerro Moreno, where she received posthumous tribute from authorities and teachers”.

For the academic of the Universidad Católica del Norte and Master in Hispano-American Literature, María Constanza Castro, the influence of Antofagasta on the poet was not minor for her work. “Lucila was born in the Norte Chico and that founding fact strongly marks her work. She breathes the desert landscape and the Diaguita culture in her writings. She was enthusiastic and knowledgeable about her land, but she also traveled and worked in our region. We feel the heartbeat of the Andean peoples in her poetry and the pain of the saltpeter worker in her writings”, she says.

The former Liceo de Niñas (today “Marta Narea”) keeps a small museum located on its corner of Uribe and Latorre, where the furniture used by the writer during her time in the establishment is preserved, as well as the administrative documentation she left behind.

The director of the establishment, Williams Butler Portales, pointed out that “if one goes back in history, from the time in which he pursued his career as a teacher, the first thing that in Spanish -at that time, because now it is Language and Communication- they spoke of our great poets And of course coming to this establishment where Lucila Godoy Alcayaga took classes, where she was inspector general and later won a Nobel Prize like Gabriela Mistral, for literature, and later a National Prize, is a source of pride and enormous satisfaction for me, since I like the poetry, art and today more than ever we need to remember our poets who left and mark a history in our society”.