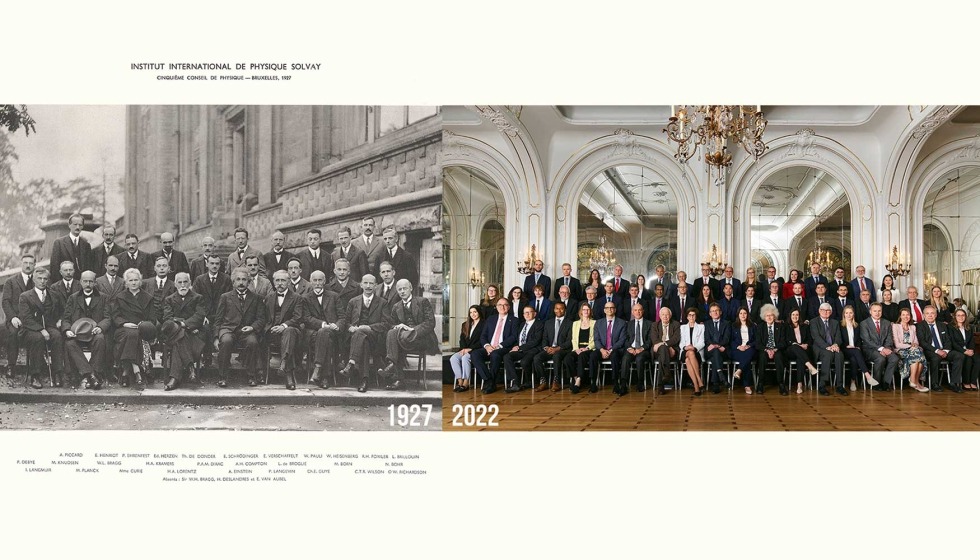 The famous photograph that brought together the leading scientific minds of the day was taken in 1927 during the Solvay International Conference on Electrons and Photons.

A total of 34 leading scientists in the field of European chemistry, including two Nobel laureates, and 21 doctoral students with a brilliant record have gathered today at the Hotel Metropole in Brussels, on the occasion of the 50th anniversary of the European Chemical Industry Council (Cefic), to recreate the iconic image made in 1927, in that same place, during the Solvay International Conference on Electrons and Photons, one of the most famous that has marked Science in the 20th and 21st centuries.

The 1927 Conference managed to showcase European research leadership through its most renowned scientists and the most privileged minds in physics and chemistry of the time, who met for the purpose of sharing and evaluating how to solve the greatest challenges of their time. weather. Among them were Curie, Einstein, Schrdinger, Pauli, Heisenberg, Fowler, Bohr, Planck or Lorentz adding 17 Nobel Prizes.

The meeting held aims to recover the spirit of international cooperation of that time and thus strengthen the alliance between science and business to ensure that scientific progress and innovation find their way to the market, actively contributing to the agenda of the European Green Deal.

Martin Brudermller, President of Cefic and CEO of BASF, wanted to highlight: I am excited to be surrounded today by the world’s best chemists and extremely talented young researchers from all over Europe. This generation will define the future of chemical innovation in Europe and, therefore, the success of the Green Deal of the European Union. Innovation is in our blood: the EU chemical industry is the world’s second largest investor in chemical R&D, spending more than €9 billion on research each year. Therefore, it is essential for the future of Europe to engage not only with the current generation of scientists but also with the future.

Spain has an exceptional pool of highly talented scientists with recognized international prestige in the area of ​​chemistry who have participated in this convention today, including two of the winners of the SusChem Young Chemical Researchers Awards, which are awarded each year by the Technology and Innovation Platform for Sustainable Chemistry SusChem-Spain, managed by the Business Federation of the Spanish Chemical Industry (Feique): Pablo Serna Galln (SusChem 2019 Award) and María Escudero (SusChem 2017 Award).

María Escudero has been an Associate Professor of Chemistry at the University of Copenhagen (UCPH) since 2017. Prestigious journals such as Science, Nature Chemistry or Angewandte Chemie have echoed her work. Escudero has received numerous awards in recognition of his pioneering research, including the European Young Chemist Award 2016 (Gold Medal) from EuChemS, the SusChem Young Researchers Award (2017), the Scientific Research Award from the Fundacin Princesa de Girona (2018 ), the Electrochemical Society (ECS) Energy Technology Division Supramaniam Srinivasan Young Investigator Award (2018), the Young Researchers Award of the Royal Spanish Society of Chemistry (2019), or the Clara Immerwahr Award 2019, among others. Recently, Ella Mara has been awarded the Journal of Materials Chemistry Lectureship 2021, an award given by the Royal Society of Chemistry. she being the first Spanish person to win this important award.

They are part of the Spanish delegation of personalities who have attended the event, Javier García Martínez, current president, and first Spaniard, of the International Union of Pure and Applied Chemistry (IUPAC) and former member of the IUPAC Executive Committee and vice president of its Inorganic Chemistry Division; Diego Peña, from the Santiago de Compostela University, and Antonio Echavarren from the Catalan Institute for Chemical Research (ICIQ).

On the side of young talents, he has participated in this meeting and in the recreation of the iconic photograph Teresa Berdugo from the Chalmers University of Technology Gothenburg and Pablo Serna, predoctoral student of the Department of Inorganic and Organic Chemistry of the Jaume I University and also winner of the SusChem Prize – Young Chemical Researchers in 2019, who has highlighted the golden opportunity of participating in a meeting with the most recognized chemists and industrial leaders in the world: I firmly believe that creating a network with them and with other young researchers to sharing our ideas can broaden my horizons and allow me to get a better perspective on my work. It is time to change the future and take advantage of the reinvention of chemistry and industrial processes that have been evolving for centuries!

In addition to the renowned scientists and the young promises of European science, 25 general directors and technology directors of the main chemical companies in Europe participated in the convention.