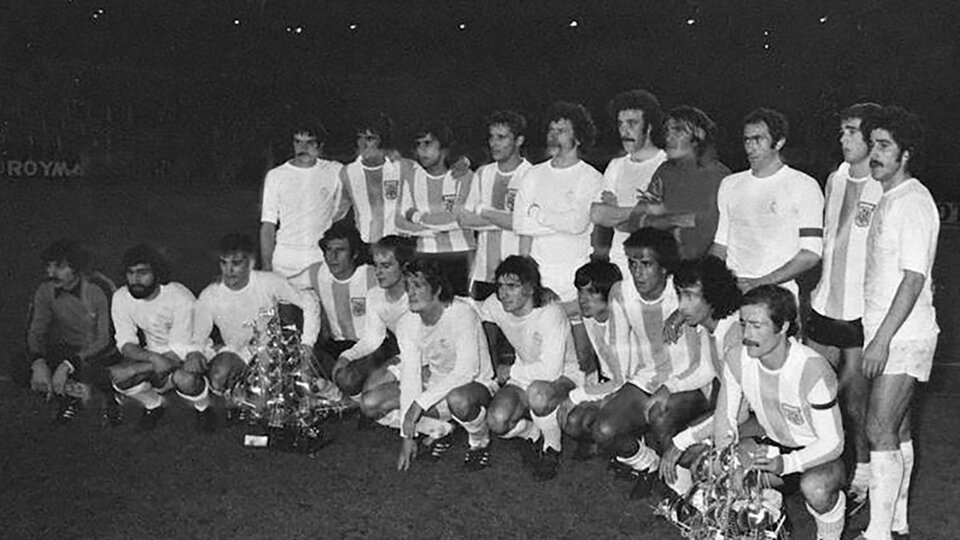 March 24 is a national holiday full of meaning. Day of reflection, of honoring the victims of State terrorism, of crushing with the policies of memory, truth and justice that place Argentina as an inescapable world reference. The date is the date of the coup but also the day in 1977 that Rodolfo Walsh sent several copies of his famous letter addressed to the military junta 45 years ago. That act of bravery takes us back to the first anniversary of the government of the genocidal dictatorship. That day the writer and militant Montonero chose to end his text with a definition of principles: “faithful to the commitment I made a long time ago to bear witness in difficult times.” That day in ’77, in addition, the Argentine soccer team played a match with Real Madrid at the Santiago Bernabeu stadium. A much less remembered friendly than the one in ’76 with Poland in Chorzow. The one that Videla sent to televise as a distraction between disappearances and funeral announcements. For a shocked population that would be anesthetized two years later with the ’78 World Cup.

The football match between the two on March 24 has almost no historical records that mention it. We say almost, in the absence of conclusive certainties to prove it. The team led by César Luis Menotti played on the same day in Europe with a year difference. They beat the Poles 2-1 with goals from Héctor Scotta and René Houseman in ’76. He lost to Real Madrid 1-0 in ’77. Vicente Del Bosque converted with 7 minutes remaining and his club won the Cup for the 75th anniversary of its own foundation. Franco had died and with him his dictatorship in Spain. In Argentina it was just beginning.

The photo gallery of the Efe agency shows images of that night where the Argentine players and the Spanish team pose together and intermingle. Hugo Gatti appears standing surrounded by three Madrid glories: the German Breitner, Del Bosque and Pirri. The goalkeeper had also saved in that match in ’76 but he would lose the starting role with Ubaldo Fillol before the ’78 World Cup. Below, kneeling and next to Jorge “el Chino” Benítez is Jorge Carrascosa, the captain and left back who resigned from the National Team that same 1977. Along with the former Banfield, Central and Hurricane player, the trophy rests on the grass – the replica perfect of a caravel – that the then president of FIFA, Joao Havelange, gave Pirri in the box of authorities.

That March 24, 45 years ago, the author of Operación Masacre began his An open letter from a writer to the military junta: “The censorship of the press, the persecution of intellectuals, the search of my house in Tigre, the murder of dear friends and the loss of a daughter who died fighting them, are some of the facts that force me to this clandestine form of expression after having given his opinion freely as a writer and journalist for almost thirty years”. The dissemination of that renowned journalistic piece that cost Walsh his life coincided with the realization of the home run in Madrid where the national team played with Iran on March 22 and two days later with the local team. The first match ended 1-1 and was decided on a series of penalties. Argentina won, the Spanish defeated Mouloudia Chaâbia from Algeria 2-1 and met in the decisive match.

Menotti put together the team with Gatti; Tarantini, Olguín, Daniel Killer and Carrascosa; Ardiles, Gallego and Villa; Houseman, Luque and Bertoni. That day Clarion titled on the cover: “Today celebrate the first anniversary of the Process.” The descent spoke of “pronouncement of the Armed Forces” and described the ceremony as “austere”. Below that, the main announcement of the medium, it was read: “At 5:30 p.m. and on TV. Final between the National Team and Real Madrid”. The soccer offer of the previous year was repeated, live and direct, although on another stage. About that friendly in Poland, Houseman would tell several years later: “The strongest memory I have of the ’76 tour is the sadness of all the players for what was happening in the country”.

One of the most committed of that generation of players, El Loco – who died on March 22, 2018 – would revisit stories of the dictatorship and football thirty years after the ’78 World Cup. In June 2008, the River Stadium was the scene of a tribute to the 30,000 disappeared. Houseman returned to the court with Leopoldo Luque – he died on February 15, 2020 – and Julio Ricardo Villa, the only champions present. They hugged Nora Cortiñas, from Mothers of the Founding Line, Alba Lanzilotto, from Abuelas, and the Nobel Peace Prize winner, Adolfo Pérez Esquivel. They also received medals. Luque was the only one who played 5 minutes of a symbolic game. The mothers had come walking from the former ESMA and stopped recently at the Monumental track, which no longer exists since its capacity was expanded.

This March 24, 45 years after that match as functional to the civic-military regime, as was the one in ’76 and also each one of the World Cup, tickets for the Champions Cup final between Italy and and Argentina. The one from Europe and the one from America will play at Wembley next June 1st. This March 24, if FIFA had been an accomplice of dictatorships and an unparalleled exponent of double standards, the national team would have had to take the field against Venezuela for the World Cup qualifiers in Qatar. The forgetfulness was repaired when the AFA reminded him of the national holiday in our country.

Another March 24, but in 1978, there was a soccer player who redeemed soccer from its induced sins. Because as Jorge Valdano said with similar words, football is innocent. Above all, the robberies perpetrated by others using his name. Two years after the coup by Videla and José Alfredo Martínez de Hoz, the perfect symbiosis of class interests blessed by the leadership of the Catholic Church and with the logistical support of the United States, the former Almagro goalkeeper Claudio Tamburrini escaped from the center Mansión Seré clandestine detention facility that was under the operational control of the Air Force. Naked, he hung from some knotted sheets to get lost in the night in Castelar and flee days later to Sweden. Today he is a prestigious philosopher who teaches in the country where he took refuge. Witness in the Trial of the Boards of 1985, his contribution was key to convicting Brigadier Orlando Ramón Agosti.

Every March 24, history is rewritten from some unexplored corner and soccer appears in it as a supporting actor. “We had left the country with a democratic government and when we returned to the country everything was different. We were very afraid of everything…”, commented Héctor Scotta, the author of one of the Argentine goals in Chorzow that day in which the game with Poland was televised live while a wave of kidnappings, torture and disappearances began throughout the national territory.

45 years after another March 24, but in Madrid | The Real Madrid-Argentina that was played at the Bernabéu in 1977