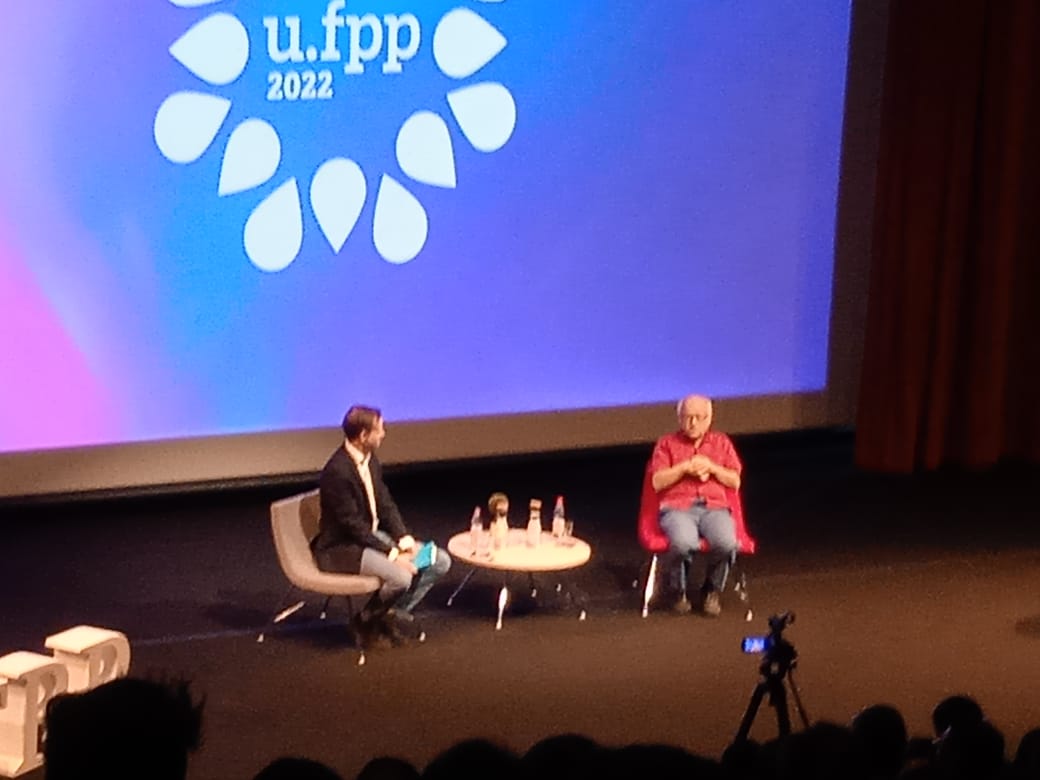 The son of Milton Friedman, father of neoliberalism and the Chicago Boys, came to Chile invited by the Fundación para el Progreso. Here he spoke with Axel Kaiser about global warming, inequality, drug use and the liberal success of Chile limited by plans for a new Constitution. The Bewilderment was there and this was what he observed.

It is nine in the morning and the Municipal Theater of Las Condes is practically full. Breakfast is available for attendees. Juice and grain coffee. Cookies and sandwiches. I take advantage of eating, while I observe the fauna around.

Most of the attendees are men. Light blue shirt and pleated pants. That unmistakable blend of pole and dockers. There are executives from transnational companies, startup owners, business school students and all kinds of entrepreneurs. A little further on, two guys comment that the next guest should be Javier Milei.

They are the same people who have heard the lectures by Mario Vargas Llosa, Jason Brennan, María Blanco and Diego Sánchez de la Cruz before. Icons of the liberal world that the Foundation for Progress (FPP)think thank that organized the event, has tried to bring the country closer to instruct its hosts.

Today nearly a thousand of them are here to listen to David Friedman, the rebellious son of Milton, father of neoliberalism and the Chicago Boys. The man who promoted the model that led Chile to become the “jaguar” of Latin America and, in turn, one of the most unequal countries in the world. The model paradox, some call it.

47 years ago David’s father visited the country and met with Pinochet to convince him to apply the shock doctrine, a series of drastic economic changes which, among other things, would provoke psychological reactions in people. This time it is the turn of his son, an economist with a doctorate in physics and one of the main theorists of anarcho-capitalism, a doctrine that seeks a free society without State interference, where goods and services, including the law, can be produced by the government. market. Theory developed in his most famous work: The Freedom Machinerypublished in 1973.

The conference is about to start. The last to arrive sit in the boxes, the lights go out and after a brief presentation, they enter the stage. Axel Kaiser and David Friedman. The ovation is total. The man who has been heading the list of most read books in El Mercurio for nearly a year (“El Economista Callejero”), begins by commenting on something he observed behind the scenes: “behind this stage there is a coffin”he says, as if today’s talk about the eventual death of neoliberalism was embodied in a prop.

Friedman is a short man with an affable face and tousled hair, he wears jeans and a red shirt. He apologizes for not speaking Spanish and prepares to answer the six or seven questions that Kaiser will ask him over the course of an hour. A compendium of ideas that at times seem extravagant, but that makes sense to many here. For example:

1) “If we are not sure of the effects that (global warming) will have, it is better to do nothing, just observe.”

2) “Inequality should not matter, but everyone gets richer”

3) “The solution is that if people want to consume heroin (drug), it should be legal and ensure its quality.”

4) “The positive of the increase in CO2 is that it allows plants to grow in a better way and there are fewer deaths in winter due to the cold.”

5) “There are people who say they believe in socialism, but none of them want to for the government to take control of General Motors”.

The timing of Friedman’s visit is not accidental. The same Foundation recognized that the economist came to Chile in a counterweight plan, trying to balance the scenario after the visits of the Nobel Prize winner Joseph Stiglitz, the economist Mariana Mazzucato and the philosopher Elizabeth Anderson.

“Without a doubt, the visit of this economist is a healthy counterbalance and a good dose of an alternative vision of the economy and the social order, which could well enrich our impoverished public debate on to the public, to the State and to the vilified “neoliberalism”’ wrote Pablo Paniagua, a senior FPP investigator at El Mostrador. 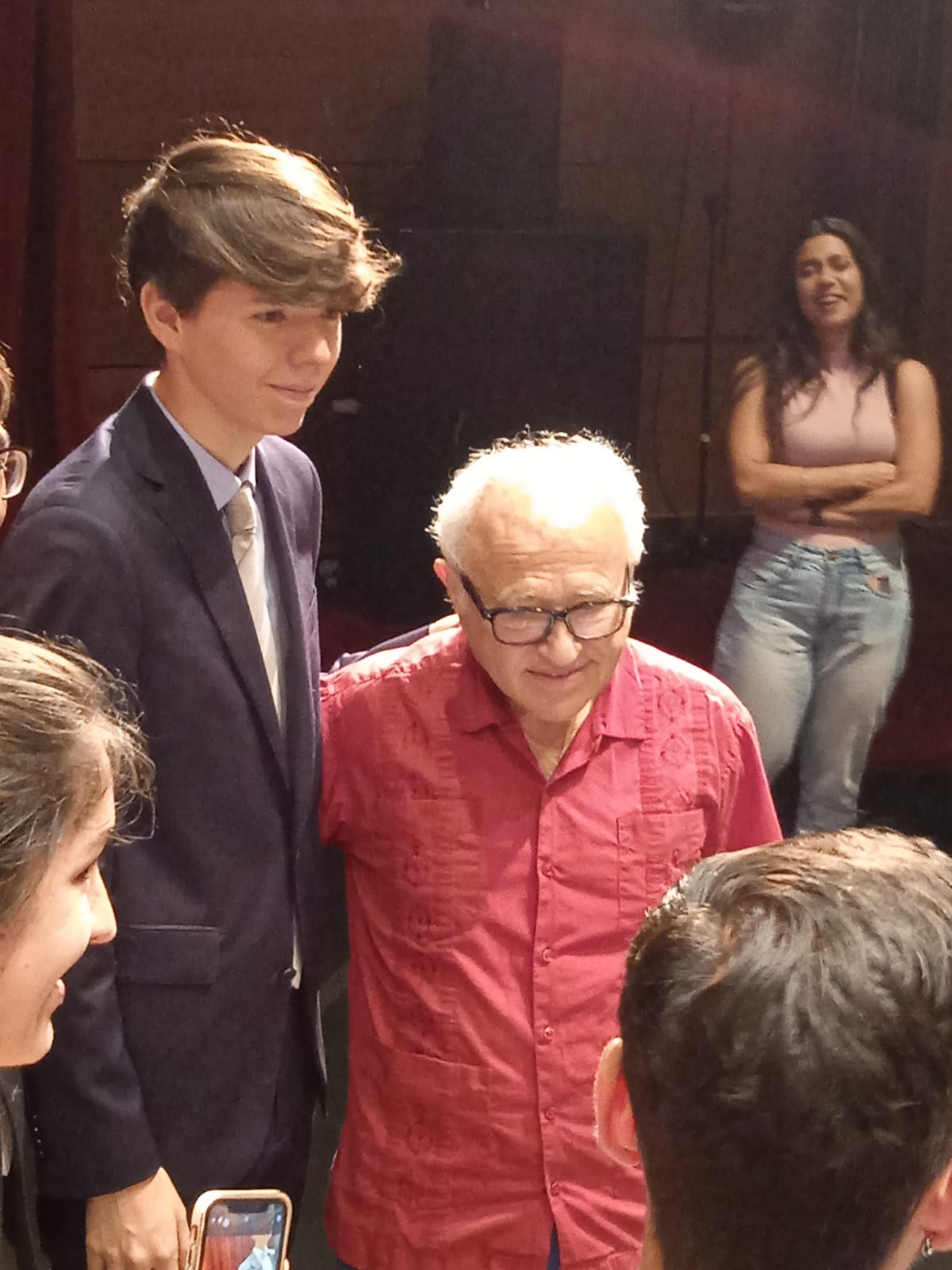 “It’s a culture battle”Gonzalo de la Carrera would later explain when asked about the importance of the event. A kind of “coming out of the closet” where they seek to show themselves as they are. “The problem is that we have not defended our ideas. We must reconstruct the historical truth of Chile to contextualize it and that people know what are the ideals that we defend. It is awakening a patriotic feeling, we do not want to be subjects of the Statebut rather that each one be responsible for himself and do with his freedom what he wants”.

Before ending the talk, Friedman says that Chile was a success in the liberal society, but that by going from being leaders of the free market to losing the support of the parties, he is not sure if the country will leave “to become Chilezuela”.

Kaiser, by way of conclusion, assures that “to bury something, you must first kill it.” Deep down, neoliberalism has not died, although on the other side of the curtains there is a coffin waiting for it.

It’s time for photos and book signings. The stage is packed with fans who hope to immortalize the moment with Friedman, among them dozens of young people who will participate this weekend in a meeting of Latin American leaders. One of the organizers tells me that in its 10 years of life the Foundation has trained more than 9 thousand young people and that the cost is assumed by the same body, created in 2012 by the former owner of Líder, Nicolás Ibáñez.

According to a study by La Bot, until December 2017 the foundation had assets of $818 million and that the board of directors, in addition to Ibáñez, was made up of businessmen Dag von Appen, president of Ultramar, and Francisco Pérez Mackenna, general manager of Quiñenco, parent company of the Luksic group. Three close to the organization, accused of operating as a political party, were even members of Piñera’s first ministerial cabinet in his last term.

Lucas Blaset, a former member of Amplitude and current president of the recently founded Libres party, assures that the economist’s visit is important because in the history of Chile the surname Friedman “weights”. “More reforms, less reforms, he is the one who creates the economic model that works until today in the country. He is the intellectual heir of his father, with much more radical ideas than him, but with a good sense in the libertarian world that makes him much more reasonable than much of the fanatic.

I consider myself a libertarian liberal and I am an antikastista. Many conservative extreme right have taken the libertarian concept to not say that they are conservative or paleoconservative, feeding a caricature that has done a lot of damage to the group. Kast is a conservator through and through. If someone feels libertarian and supports Kast, for me he has no less cognitive dissonance.

For the Sin Filtro panelist, Magdalena Merbilhaa, definitions are complex. In her case, he assures that at some point she thought that she was a libertarian, but later she understood that it had several nuances. “I think that the State must exist in its minimum expression, that you could outsource everything and pay. I fully subscribe to the ideas of liberty, but after reading Roger Scruton I came to the conclusion that I am a conservative. Because I am super clear about what I want to change and I also want to keep it and why I want to do it”, he maintains.

In an inn, located at the exit of the theater, brochures are distributed with part of the ideas professed by the Foundation. There is a constitutional manual with the most important rights for libertarians: right to life, personal liberty and property.

Another book dedicated to illustrious citizens includes Adolfo Ibáñez, Federico Santa María and Gabriela Mistral. Of the latter, an unknown phrase stands out that would make it one of the strongest defenders of “educational freedom”: “The educational State is nothing more than a monopoly for the unanimous manufacture of consciences. Someday governments will only have to give resources to institutions and individuals that abundantly prove their efficacy in education.”

The jewel of the lampoons is a small “Decalogue of Liberal Feminism” that includes phrases by the chess player Anna Muzychuk, the writer Camille Paglia and the doctor in economics María Blanco, among others. The most outstanding points are that liberal feminism considers women and men equally worthy, that the understanding between the two is contrary to the gender struggle, that the culture of autonomy and respect is about victimization and that the free market is the best ally for the progress of women.

Before retiring I pick up a few copies, inadvertently carrying a guy over my shoulder. I apologize and then he smiles at me commenting sarcastically: “socialist”. we both laugh. Me simulating and he at the top of his lungs.

The coffin continues behind the scenes.

A Coffin Backstage: The Libertarians’ Massive Conference With David Friedman

This was the 2021 Nobel Prize award ceremony
Videos | Ephemeris of April 17 - La Jornada Web
Gender gap in science: only 33% of researchers are women
Tweet
Share
Share
Pin
Other links: https://awardworld.net/resources/