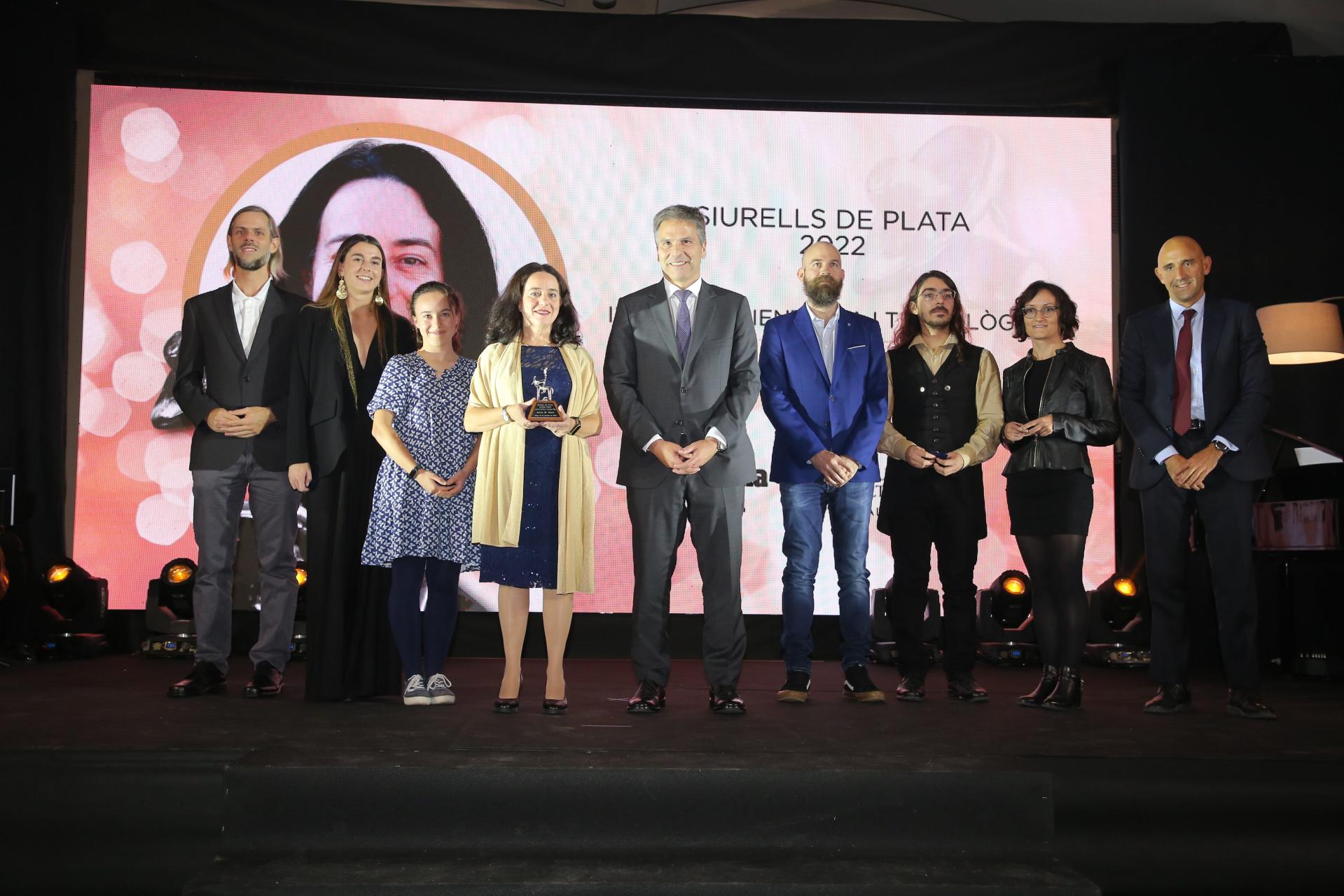 The Oliver de Termes salon, They are Termeshosted on Thursday the Last Hour Silver Siurells Galain a brilliant evening like the ones before the pandemic, free of sanitary restrictions and masks.

The main authorities of the Islands, headed by the president of the Government, Francina Armengoland representatives from the world of science, culture, sports, business and banking, attended a gala in which the work of outstanding people was recognized.

The president of Grup Serra, Carmen Serra; the CEO, Pedro Rullan; the director of Ultima Hora, Miquel Serra; the counselor and director of Audiovisuals, Paula Serra; the administrator of Ultima Hora, Luis Anaya; and the commercial director of GBM, Alfons Moll, together with other executives of the Serra Group, received the almost four hundred guests at the gala. But the night of celebration could not have been oblivious to the dramatic situation of the war in Ukraine, whose beginning was precisely nine months old on the same day these awards were presented. The voice of Mónica Molina, accompanied by the Ukrainian Rhapsody band, made up of three musicians from that country; Toni Cuenca on double bass and the percussionist Benjamín Habichuela, let himself be heard to interpret Between your eyes and mine, a call for peace in these troubled times. The music band accompanied the entire evening with magnificent performances, and at the time of its presentation beautiful images of Ukraine, before the war, were projected.

The Menorcan actress Queralt Albinyana was the master of ceremonies at a gala in which the work of “brave and committed people who bear the name of the Balearic Islands beyond our land” was recognized, and she surprised everyone with her voice interpreting Summertime accompanied by the musicians

The president of Grup Serra, Carmen Serra, addressed the winners and the nearly four hundred guests with a speech in which she highlighted the values ​​represented by the winners, and thanked the sponsors of the Siurells de Plata and the members for their collaboration of the jury of these awards that Ultima Hora grants every year.

The first award of the night was the Siurell Scientific and Technological Initiativefor Alicia Sintes, in charge of the UIB Gravitational Physics Group, who was part of the group of scientists that contributed to detecting gravitational waves together with the American scientists Barry C. Barish and Kip S. Thorne, among others, an investigation which won them the 2017 Nobel Prize in Physics. Alicia Sintes, accompanied by members of her team –David Keitel, Rodrigo Tenorio, Marta Colleoni, Rafel Jaume and Maria de Lluc Planas– and her daughter, Mar Elisa, collected the award from hands by Jordi Romañach and Antonio Sánchez Grao, Director of Communication and Institutional Relations at El Corte Inglés de Catalunya and the Balearic Islands, respectively.

The Fundació Banc d’Aliments received the Siurell Social and Ethical Initiative. Its president, Raimundo de Montis, accompanied by the vice-president of the Foundation, Tòfol Sbert, collected the Silver Siurell from the hands of CaixaBank’s territorial director, María Cruz Rivera.

Of Siurell Cultural Initiative Sa Xerxa, which every year organizes the Fira de Teatre Infantil i Juvenil de Balears, has been clearly deserving. A non-profit entity that has recently received the National Award for Performing Arts for Children and Youth granted by the Ministry of Culture. The president of Sa Xerxa, Jaume Gomila, accompanied by Jordi Rosselló, Àngela Jaume, Aina Quintana and Francisco José Villegas, collected the award from Martí Ribas. General Director of Endesa in the Balearic Islands, and Doris Casares. Director of Communication of the Iberostar Group.

The Fundació Miquel Jaume Palma Futsal, a benchmark in Balearic sport, was awarded the Siurell Values ​​Esportius. The figure of the former Futsal president, Miquel Jaume, who died last year, was remembered with great emotion. The general director of Tirme, Rafa Guinea, was in charge of presenting the Silver Siurell to Tomeu Quetglas, president of the Foundation, and Maria Jaume, daughter of Miquel Jaume.

The Siurell Environmental Initiative recognizes this year the Gremi de Margers, for the work of dry stone professionals, a trade declared Intangible Heritage of Humanity by Unesco in 2018. The margers have contributed to preserving a unique landscape and transmit their knowledge from generation to generation . The president of the Gremi de Margers, Lluc Mir, accompanied by Guillem Palou, Miquel Estarelles, Feliu Llabrés and Miquel Busquets, received the award from Carmen Dameto, president of Son Termes, and Rosa María Regí, honorary president of QuirónSalud Balears, two women that Queralt Albinyana presented as an “example of commitment to our land and its landscape”.

The Faculty of Medicine of the Balearic Islands, from whose classrooms the first class left in June of this year, received the Siurell Actualitat Last minute. The dean of the faculty, Miquel Roca, accompanied by Francesca Garcías, Margalida Gili, Catalina Picó and Eduard Vivancos, collected the award from Joan Alba, Adalmo’s general manager, and Óscar Mayol, president of the Sóller Railway.

TheSiurell d’Honor Pere Serra, a very special award, has been this year for the Museu Sa Bassa Blanca. Its founders, Ben Jakober and Yannick Vu, although they could not attend the gala, were present thanks to a magnificent video made by Nova Producciones, which also produced all those that served as an introduction to each of the Silver Siurells.

After the awards ceremony, the President of the Government, Francina Armengol, dedicated a few words to each of the winners, who “represent the best of us as a society.” In her speech, she recalled the effort made by everyone to overcome the pandemic, and she lamented the pain and crisis now caused by the war in Ukraine.

And once again the voice of Mónica Molina, with the song Vuela, filled Oliver de Son Termes with music and closed a gala full of awards and emotions. The guests then enjoyed an exquisite dinner prepared by chef Nuria Arbona and her team.

Sa Bassa Blanca, much more than a museum

A night of prizes and emotions

More immigrants and late retirement, the lifesavers for the Spain of the 200,000 centenarians
December 2022: What are the ephemeris of December 20?
¿Qué es el Humanismo Progresista? - Las2orillas.co
Tweet
Share
Share
Pin
Other links: https://awardworld.net/resources/