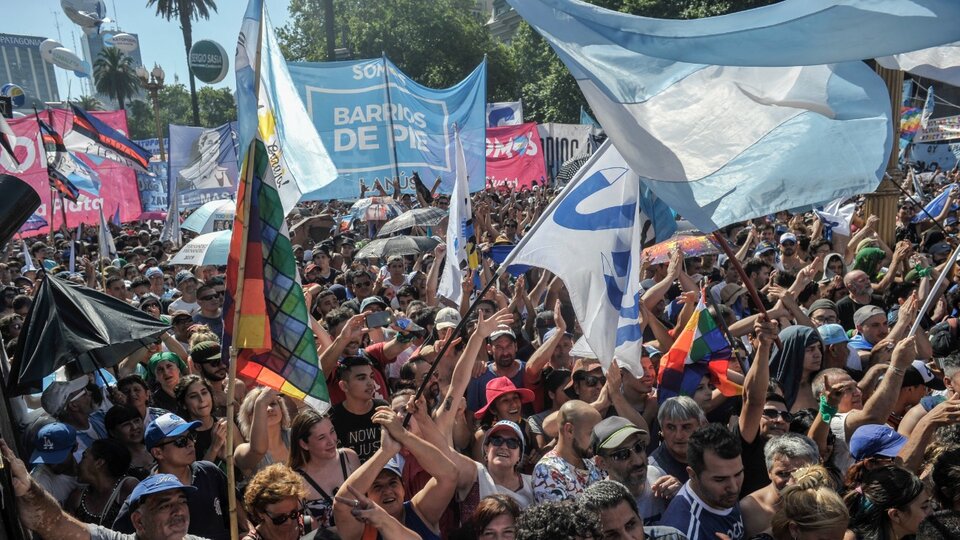 President Alberto Fernández confirmed to this newspaper that he will a great act in Plaza de Mayo for December 10, Human Rights Day and the 38th anniversary of the return of democracy in Argentina, after the 1976 civic-military dictatorship. On this occasion, he will be accompanied by the Vice President, Cristina Fernández de Kirchner, and also by the former president of Brazil, Luiz Inácio Lula Da Silva, who will arrive in Argentina the day before. The three are expected to speak, but at La Rosada they warn that it will not be a partisan act, but a cultural festival with musical bands and aimed at the entire town.

Before that, the Government will present the Azucena Villaflor awards at the Bicentennial Museum to the president of the Grandmothers of Plaza de Mayo, Estela de Carlotto, to the Mother of Plaza de Mayo Founder Line, Taty Almeida, to the former senator and defender of Human Rights, Hipólito Solari Yrigoyen, and the filmmaker Pablo Torello.

That day is also the second anniversary of the assumption of the Fernández-Fernández formula. The President explained that Lula’s presence has to do with his personal bond and that it does not in any way interfere with the good institutional relationship it maintains with the Brazilian government.

Fernández has a long-standing friendship with Da Silva. He even went to visit him when he was detained at the Superintendency of the Brazilian Federal Police in the city of Curitiba, on July 4, 2019. At that time, Fernández was a pre-candidate for president and Lula was serving the questioned sentence of Judge Sergio Moro, for the one who was imprisoned for 580 days.

He was also part of the international committee for his release, which included, among others, Cristina Fernández de Kirchner, the Nobel Peace Prize winner, Adolfo Pérez Esquivel and the president of the Chamber of Deputies, Sergio Massa. In dialogue with Page 12, on July 5 of this year, Lula had highlighted that he was moved by the support he received from Alberto Fernández and Cristina Kirchner while he was detained and anticipated that “I want to visit Argentina this year and thank the people.”

The possibility will finally be given next Friday, when the government of the Frente de Todos and the massive crowd that gathered on that occasion in Plaza de Mayo have also been held for two years. This time, they clarify, it will be “a citizen festival.”

The last important act, and the first after the pandemic, that took place in the historic square was the one that was carried out to celebrate the Day of Militancy on November 17. This concentration meant for the President an important support from the social, political, union, mayors and governors movements.

As this newspaper learned, the former Brazilian president called Fernández from Spain after seeing the images of the act for the Day of Militancy, congratulated him and commented that he would like to share something similar with him. From there came the invitation for the day of Democracy.

Lula, a few days ago, back in Brazil, confirmed to Fernández that he was ready to travel and on December 9 he will finally arrive in Argentina. On the 10th he will visit Fernández in La Rosada, they will have a meeting alone in his office and then they will go down to the Bicentennial Museum to present the Azucena Villaflor awards.

From Alfonsín to Kirchner

December 10 is a date of multiple celebrations. In 1983 Raúl Alfonsín assumed the presidency and that is why it is Democracy Day. It is also Human Rights Day and in 2003 the then president Néstor Kirchner instituted the delivery of the annual award Azucena Villaflor, who was the founder of Madres de Plaza de Mayo and disappeared by the dictatorship, with the aim of recognizing outstanding citizens or entities for his civic career in defense of human rights. Paradoxically, these awards were not awarded during the Macri government.

For all these reasons, La Rosada warns that the rally will not be a partisan act. The Minister of Public Works, Gabriel Katopodis had already advanced in radio statements during the week that the act “would be open and comprehensive because it is what corresponds and what we intend.” Along these lines, the recognition at the awards will have that mark: one of those who will receive it is Solari Yrigoyen, former senator for the UCR and descendant of the first radical president of Argentina, and also the filmmaker Pablo Torello who made the documentary “Historia de Appearances “, whose investigation allowed the discovery of the remains of Villaflor.

The Association Mothers of Plaza de Mayo, represented by Hebe de Bonafini, decided to celebrate the date on Thursday – when they do their now traditional marches. There, communities of native peoples will present to the Mothers the emblems of their peoples, in gratitude for being a reference for the fight for Human Rights. In addition, from their YouTube channel they will broadcast an interview that Hebe will carry out with the former president of Ecuador, Rafael Correa, about the situation in Latin America and human rights.

Fernández, a week after the event, will travel to Brazil to participate in the summit of Mercosur heads of state, which will take place in Brasilia, between December 16 and 17. The relationship with Brazil, in recent months, has been developing in a virtuous way. Even on Wednesday, the Secretary for Strategic Affairs, Gustavo Beliz, the Deputy Chief of Cabinet, Jorge Neme and the Argentine Ambassador to Brazil, Daniel Scioli, with Jair Bolsonaro and his Minister of Economy, Paulo Guedes, were even meeting in Brasilia.

There the Brazilians assured that they support the Argentine government in its negotiations with the IMF. After that, the officials participated in an act at the Argentine Embassy where the historic “Declaration of Foz de Iguazú” was recalled, and both presidents, Fernández and Bolsonaro, sent a recorded message talking about the importance of the strategic union between the two countries. From La Rosada they assure that the institutional relationship remains in perfect condition with the Bolsonaro government and that Lula’s presence in the act is simply due to the personal bond and friendship that Fernández has with him.