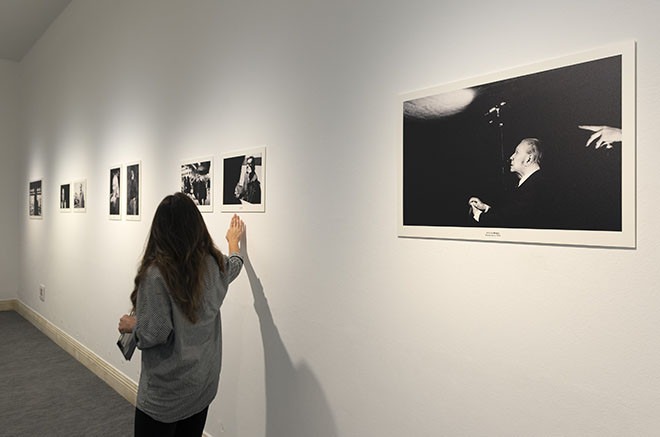 Jorge Luis Borges did not see, but he looked. His eyes, in the dark, were fixed on the great hall of the Argentine National Library. A young, shy voice asked permission for a photograph and he, who found the request innocent, lovingly agreed. It was 1978, the photographer, Daniel Mordzinski, was 18 years old and that was the first photograph of a career dedicated to feeling, from the light, the interior of the writers of an entire era.

The black and white image was taken with his father’s camera. Developed the negative, photography unfolded the concept: Borges, sitting and leaning on his cane, was portrayed surrounded by darkness; a small beam of light, pointed out by a foreign hand, within the plane by chance, seems to be capturing the writer’s attention.

The first photograph developed by Mordzinski opens Stone Raft Boaters, a journey through 40 years of experience as a photographer of writers and a set of nearly a hundred photographs that will be kept at the Agustín de la Hoz House of Culture, in Arrecife, until the end of this month of May. The photographic exhibition, which brings together the portraits of authors from more than 20 countries on both sides of the Atlantic, is part of the program for the centenary of the birth of José Saramago.

The title that encompasses the photographic selection, and that gives a concept to the whole set, embraces the cultural dream without borders of the Nobel Prize for Literature: transiberism, an enormous bond of Luso-Hispanic civilizations capable of eliminating the north-south duality, which it defended, from fiction, the stone raft (1986). In the work, the Iberian Peninsula breaks away from Europe and, converted into a large drifting island, begins a journey across the Atlantic heading south, towards a reunion with the peoples on the other side of the ocean.

The title of the exhibition refers to the Nobel’s cultural dream: trans-Iberism

“All over the Pyrenean mountain range, the granites exploded, the gaps multiplied, other roads appeared cut off, other rivers, streams and torrents sank into the invisible. Over the snow-covered peaks, seen from the air, a black line opened and quick as wildfire, where the snow slipped and disappeared, with the white noise of a small avalanche. The helicopters came and went without rest, observing the peaks and the valleys, packed with experts and specialists of everything that could be of any use (…). Human strength could not do anything against a mountain range that opened like a grenade, without apparent pain, hardly, who are we to know, for having matured and its time has come” (the stone raft. Jose Saramago).

First image of Mordzinski to Jorge Luis Borges, in the Argentine National Library (1978).

Mordzinski’s raft floats through the common territory of universal literature in Spanish and Portuguese. The portraits of writers from three continents follow one another throughout the exhibition halls, which also play to darken wall after wall.

The journey that the author proposes starts from a room with white walls, which wants to illuminate the first years of the photographer after the light of literature. It brings together anecdotes and old voices: that first image of Jorge Luis Borges, in 1978; Cortázar, who agreed in 1980 to visit, in a room in Paris, the first exhibition of that young photographer, who had called him in a sea of ​​nerves after finding his contact by chance, to invite him to attend; the always free Cristina Peri Rossi happily occupies the entire bed; Jorge Amado, a lover of the streets, portrayed in a market, among fruit, bustle and people; an exiled Benedetti, with a shy smile, looking at the camera sitting meters away, far away and in the light, at the end of a long dark corridor. Completing this first room are portraits of Rafael Alberti, Claribel Alegría, Osvaldo Soriano, Nélida Piñón, Juan Goytisolo and María Kodama. Some, some, look serenely at the camera; others walk or read on a sofa, or perform by candlelight. All, all, reflect something of its essence that the public notices but does not know how to unravel.

At the end of this first room, the pinnacle of the play of light, a recent Nobel laureate, José Saramago, walks along the banks of the Seine River. The lights of a huge ship, out of focus in the scene, are reflected against the water and Saramago’s backlit profile seems about to travel.

Throughout the rest of the rooms, the walls darken. Room by room, the white that served as the canvas for the first photographs gradually gives way to darker shades of gray until the final room of the tour, where everything closes in black.

The journey from white to black is full of nuances. Starting in the second room, the photographs take on color and portraits are interspersed, which do not follow a chronological order nor do they follow regions or borders. The navigators of the stone raft that inhabit Mordzinski’s territory make their way without distinctions and without separations, only ordered by visual criteria, in symmetrical compositions that help establish dialogues between authors. The rooms are populated by faces of writing from countries of the three continents bathed by the Atlantic, bringing together in a raft the letters of Spanish and Portuguese. They have representation and voice Guatemala, Uruguay, Mexico, Colombia, Puerto Rico, Argentina, Ecuador, Peru, Chile, Nicaragua, Panama, Cuba, Spain; Angola, Mozambique, Brazil, Portugal.

Dialogue between the photographs of Gabriel García Márquez and Mario Vargas Llosa, in the exhibition.

Color, the search for playfulness and deciphered personalities follow one another: Ida Vitale, exiled poet, essentialist, defender of vitality in verse, holds a colorful paper bird; Ana Luisa Amaral, one of today’s most translated and published Portuguese poets abroad, looks at the lens from a travel suitcase; Pérez Reverte hugs an encyclopedia, Isabel Allende pokes her head out from the domestic intimacy of a bathtub, and Luis Sepúlveda fights with boxing gloves against an invisible enemy; Paulina Chiziane, a faithful observer of the social, leans against a quintal of a door, her profile silhouetted against the street, and Mia Couto, the narrator who loves the dreamlike, the magical, is portrayed among the dance of shadows from a window.

Colour, the search for playfulness and personalities follow one another

One after another, the great names of literature follow one another, and the public, overwhelmed by the views, stops to admire two large-format photographs that seem to vindicate the meeting between two universes: Mario Vargas Llosa and Gabriel García Márquez, portrayed in two beds with white sheets. The former writes lying down, by candlelight, his wedding ring in the impact third of the photograph’s frame. The second, sitting on the edge of the mattress, receives light from an open window and seems about to get up to start the day. 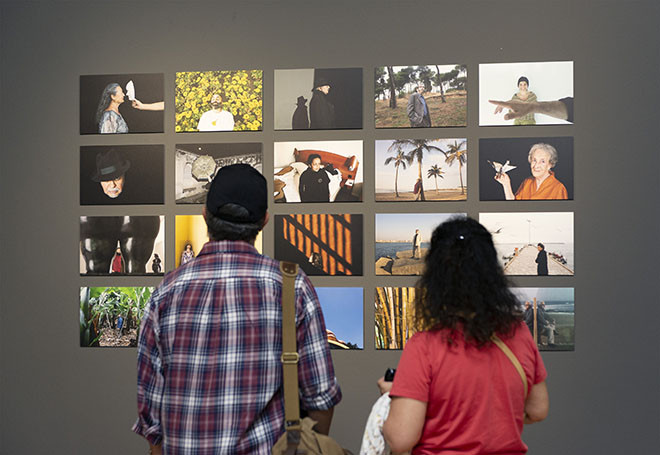 Portraits of authors on both sides of the Atlantic, in the penultimate room of the exhibition.

The closing of the exhibition, in absolute black, includes an important selection of photographs of José Saramago, in his last years of life, dedicating, in addition, an entire wall to a large-scale image of the writer in Lanzarote. The Saramago that Mordzinski had just met in Paris, winner of the Nobel Prize just a few days before, opened the tour in a room with white walls and also in this room, like small points of light, some of the photographs of that first session appear, accompanying the photographer’s last memories of Saramago.

The last room seems to say goodbye, closing José Saramago’s journey, although perhaps his readers, walking through it, remember the words of his poem Horizonte (You possíveis poems, 1996): “There is no more horizon. Another step that I took, / If the limit were not this rupture, / I would take it falsely: / In a dim indivisible curtain / Of space and duration. / Here the parallels will meet, / And the parabolas in straight lines rebound. / There is no more horizon. Silence answers. / It is God who was wrong and confesses it”.

Perhaps your readers remember Horizon and confirm: “It is God who was wrong and confesses it”. José Saramago has not finished his journey: he is eternal.

A stone raft in the light of Mordzinski