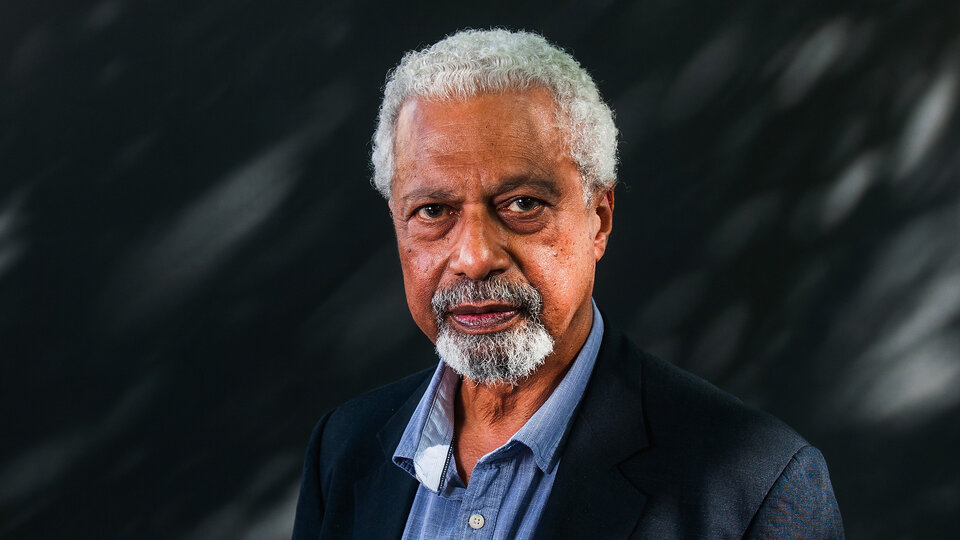 the drama of refugees it is that the future and the past are somewhere else. An 18-year-old Tanzanian, born in Zanzibar, arrived as a refugee in the UK in the late 1960s, studied for a Ph.D. at the University of Kent, began teaching and writing novels in English. Behind him was Swahili, his mother tongue. Abdulrazak Gurnah, that young man who is now 73 years old, found in fiction the territory to exorcise stereotypes and open his gaze towards the diversity of Africa. The books of last Nobel Prize for Literature are beginning to arrive in this part of the world. In addition to Paradisepublished for the first time in Spanish in 1997, adds another reissue: Seasideboth edited by salamander. “Being a scared and needy foreigner must be a very distressing situation,” Gurnah said in a videoconference with nearly a hundred journalists from Spain and Latin America.

Ukrainian refugees from the war They were the order of the day among the questions that Gurnah answered with the patient kindness of someone who knows that for a time, until there is another new Nobel Prize for Literature, he will have to accept the rules of a game in which he did not decide to participate, even if it has been nominated and elected. A few days ago he was visiting Germany. Wherever he walked, the Tanzanian writer met Ukrainian families on the streets and, especially, at train stations. “They looked like one would expect: anxious and distraught. And they couldn’t speak German; but there were signs in the streets, written in Ukrainian, to inform them in their language where they could go to get clothes or food. It is impressive to see how sympathetically the German people responded to the Ukrainian refugees”, underlined the Tanzanian writer.

Compassion for the Ukrainians

Immigrants who “travel from the south of the world to the countries of the north”Gurnah commented, are received in some parts of Europe, “with some reluctance”, something that for the Tanzanian author “is nothing new”. “This reluctance respond to racism before the appearance of these people in Europe. Not all countries have reacted like this. Germany did very well with the Syrians, also Spain and Portugal. But in other countries these people are spoken of as criminals who come to ruin our comfortable lives,” he explained, adding that before the images of the three million Ukrainians who have been forced to leave their country, Gurnah admitted that he feels “compassion.” . “What else can one feel when seeing something that is without a doubt a vicious and malevolent attack on the homes of so many people? It is terrible to witness this,” he acknowledged. fifth African writer to win the Nobel Prize for Literature “for his moving description of the effects of colonialism in Africa and the fate of refugees, in the abyss between different cultures and continents”.

Gurnah warned that not all displaced persons and refugees enjoy the same consideration. “In a way the Ukrainians are lucky for a reason, and that is that many have responded compassionately in their neighboring countries, but not all towns are so well received. One can only feel sadness to see how once again these people are forced to flee their countries and their loved ones.” For the Tanzanian writer, it is “not at all surprising” that European countries show more sympathy for Ukraine because they are its neighbors, sometimes almost part of the family. “But it is sad that this kind of hospitality is not always extended to Afghans, Syrians or Iraqis as wellwhich appeared on the border between Poland and Belarus and were returned after being exposed to the elements in the dead of winter,” Gurnah recalled.

Uprooting has left marks on Gurnah’s life and work. “It is something that can happen to people when they are only 10 or 15 kilometers from home, but I am interested in the broader movements, people forced to leave their countries because of wars or other reasons. Throughout my entire adult life I have had to deal with rootlessness; but it happens to people all over the world, it is a global phenomenon.” On Seasidethe novel that Salamandra will distribute in Argentine bookstores from April 1, the writer investigates the effects of European colonization, the experience of exile and the feeling of guilt through the story of Saleh Omar, a 65-year-old former merchant who lands at Gatwick airport with a false passport and a mahogany chest of incense.

The strategy of the weak

Although he was educated in an English school, Saleh pretends not to know English and to communicate with him the social services turn to Latif Mahmud, an exiled teacher who lives in London. Gurnah clarified that one piece of advice given to many people who arrive in a country seeking political asylum is to say that they do not understand the language. “The I don’t understand what you are telling me It is a strategy adopted by the weak, “said the writer and said that the character of Saleh Omar emerged from an Afghan plane that ended up hijacked and landed in London. “Not only the hijacker but also the passengers sought asylum in Britain, including a very old man with a bushy gray beard that made me wonder why that old man wanted to change his life at this point.”

When Seaside It came out in English, more than twenty years ago, The Observer he defined it as “a poetic manifesto against the tyranny of language when it is used as a tool of the states”. What role belongs to intellectuals, to writers, when the tyranny of states leads to a war like the one in Ukraine and Russia? “You can’t throw a book at a tank to stop it. – answered the Nobel Prize for Literature -. Literature cannot intervene against tyranny in this way, through force, but it can clarify things for us so that later we can fight if we want to. I don’t think an authoritarian person reads a book and decides to change. What literature can do is inform us so that we do not allow tyrants to abuse us.

That Gurnah is the first black African writer to win the Nobel Prize for Literature in more than 30 years deserves reflection. “What he shows is that in the Swedish Academy the decisions in general are European. How many Indians, Chinese or Japanese have won the Nobel Prize for Literature? The question is why have they always been Europeans. Non-European literary productions are given very little value; it is an expression of the provincialism of the Swedish Academy, about which I don’t want to say anything that is critical,” Gurnah said, adding that “those prejudices are already being corrected.”

Abdulrazak Gurnah, Nobel Prize for Literature: “Not all refugees are well received in Europe | The novel “On the Seashore” will be republished by Salamandra