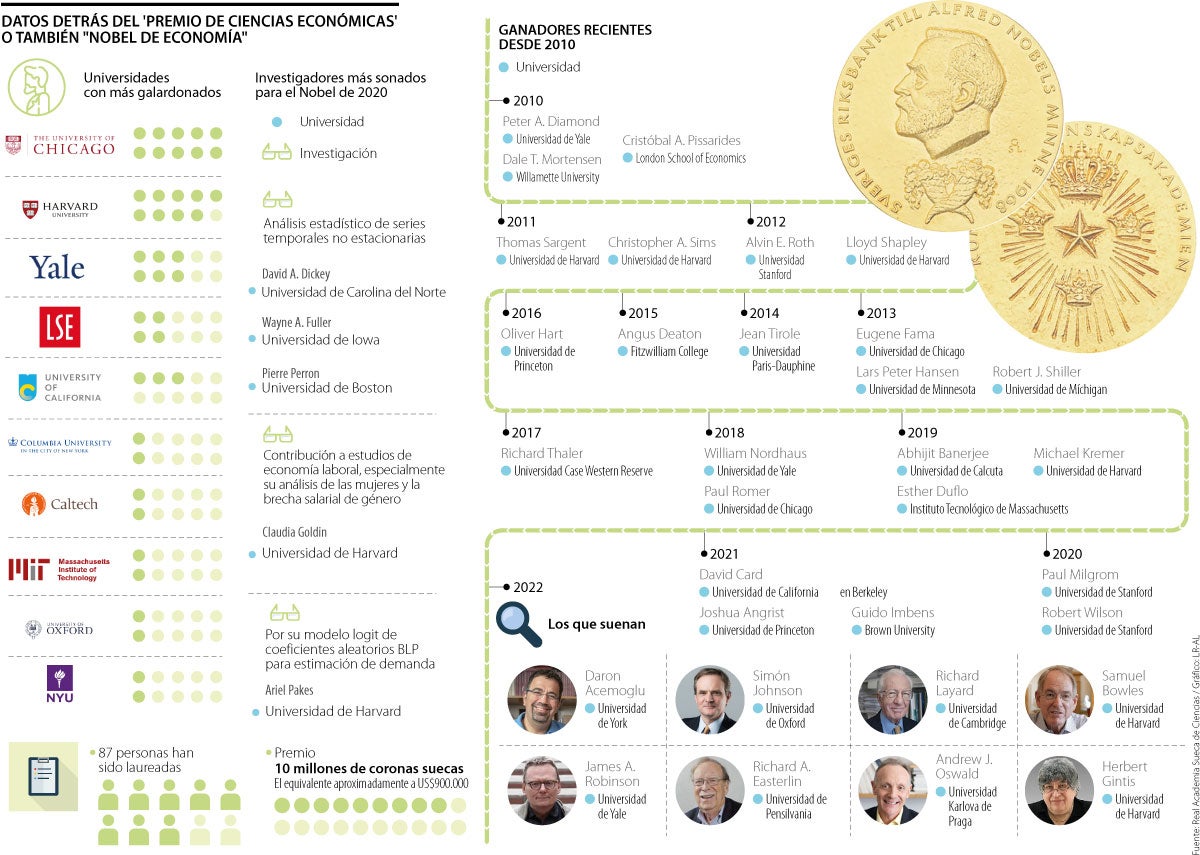 Alfred Nobel never actually instituted a prize in economics. Since 1901, when the awards began to be given, the economic award was absent. It was not until 1968 that the Bank of Sweden decided to create the category award in memory of the Swedish inventor, even 72 years after his death.

This year the lights are on eight economists: Daron Acemoglu, James A. Robinson, Simon Johnson, Richard A. Easterlin, Richard Layard, Andrew J. Oswald, Samuel Bowles and Herbert Gintis, according to Clarivate Analytics, a company that owns and operates a collection of services primarily focused on data analysis, including scientific research.

To select the candidates, the analysts focus on data from the Web of Science, an online resource that reflects the indexed content of more than 34,000 scientific journals and other source materials.
“We are particularly interested in the authors of highly cited articles,” they say on the page. “Articles cited more than 1,000 times are rarities,” they added.

Daron Acemoglu
He is an institute professor at MIT and an elected member of the National Academy of Sciences, the American Philosophical Society, and the British Academy of Sciences. This researcher has dedicated himself to finding the recipe to get out of underdevelopment. However, he distances himself from the premise from which many economists start, who attribute cultural, geographic or educational factors to the gap between rich and poor.

He assured that the gap begins in the formation of the institutions that each country built and that determined the path of development of each society. In fact, Several winners of the Nobel Prize in Economics saw in his research a modern approach to an old economic problem: global inequality.

James A Robinson
The American political scientist, economist and professor at the University of Chicago has made a name for himself in the last year for his research in the area of ​​inequality in Latin America.

He assured that the inequality gaps in this region were intensified by the covid-19 pandemic. He is co-author of the book “Why do countries fail? The origins of power, prosperity and povertyin which he summarizes his research.

simon johnson
He was Economic Counselor and Director of the IMF Research Department from March 2007 to August 2008; During this period he was on leave from the MIT Sloan School of Management, where he held the Ronald A. Kurtz Chair in Entrepreneurship. His passion is financial matters and the economic crisis. In fact, for the last 20 years he has worked on crisis prevention and mitigation.

Similarly, economic growth in advanced, developing, and emerging market countries has been questioned. And his studies focus on steps policymakers can take to limit the impact of unfavorable shocks and manage risks to their countries.

Richard A. Easterlin
He is the creator of ‘The Easterlin Paradox’ which raises the idea that countries with inhabitants with higher income levels are not the happiest. And the countries with the lowest incomes are not the unhappiest.
He wondered if people who reach certain income levels see their ability to be happy limited.
The bases of his proposal are based on a theory of Karl Marx who assured that if a person has a house that allows him to attend to his needs, he can be satisfied and happy. But, if someone builds a palace, he will begin to feel that his house is not enough.

Richard Layard
Try to answer What makes an employee happy at work? He assured that it is the sense of belonging, social connections and a purpose or meaning. Tera Allas, director of research and economics at the McKinsey Center for Government, asks Layard what role employers can play in improving the lives of their workers. He replies: “If you look at what we know about what causes people to be satisfied with their lives, mental health becomes the most important. The quality of your relationship, if you get along with your colleagues, the quality of your community, do you feel safe? do you feel that it is friendly? and, of course, your physical health.”

Andrew J Oswald
He is a researcher who helped create the concept of the economics of happiness, a rapidly growing term in the social sciences.

Oswald has worked in seven areas: unions, labor contracts, the wage curve, entrepreneurship, homeownership and unemployment, the consequences of high oil prices, and the economics of happiness and mental health.

Samuel Bowles
He assured that market failures are only the exceptions, not the rule, and that the collective action of both States and other non-state bodies is motivated by the self-interest of the actors.
In addition, in his latest research he pointed out different tools for those who make decisions regarding public policies. The author wondered about what is most valued when making decisions.

Nobel Peace Prize and former Mexican president will meet at the University of America
OPINION | Maria Ressa's Nobel Prize is for everyone - KVIA
Campaign "Benetton? No thanks"
Tweet
Share
Share
Pin
Other links: https://awardworld.net/resources/