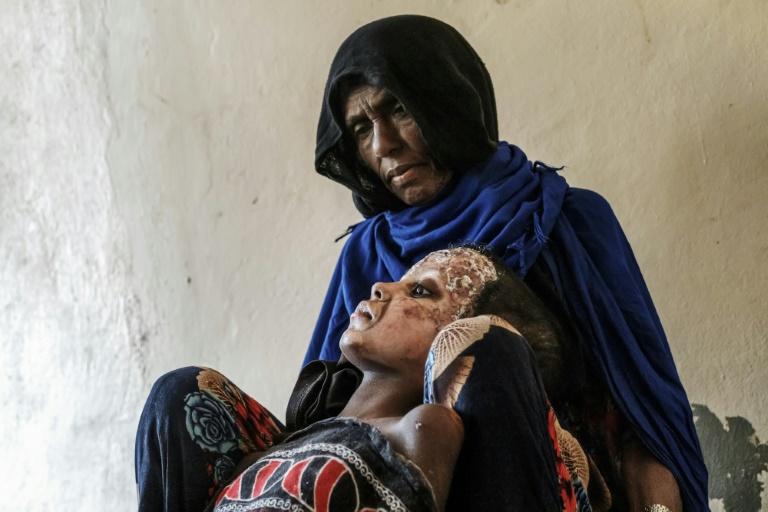 Aicha Nur was serving lunch to her 9-year-old son, Tahir, when bombs fell on the hut, engulfing the boy’s body in flames. The young mother caught Tahir and one of her other children and fled on foot under the artillery attack, attributed to the Tigrian rebels.

They managed to escape from their village in the Afar region of northern Ethiopia, but Aicha does not know anything about her other six children.

More than 15 months after the beginning of the conflict in Tigray — while foreign special envoys speak of peace, and Prime Minister Abiy Ahmed evokes the war of the past — Afar has become the most active front.

The region is facing a recent offensive by the rebels, with massive destruction and displacement of residents, according to officials and residents.

Afar’s only hospital, in Dubti, is completely overwhelmed by the influx of victims with broken limbs and doctors are short of anaesthetics.

Patients wonder why no one seems to pay attention to them, lamenting that “their voice is not heard,” says hospital director Hussein Aden.

“Nobody listens to us,” confirms Aicha, sitting with Tahir in his hospital bed, catching the flies that come to settle on the burns on his face.

The war began in November 2020 in the northernmost region of Ethiopia, Tigray.

The fighting reached Afar in July 2021, with the deployment of the Tigray People’s Liberation Front (TPLF) rebels.

In late 2021, the fighting in Afar intensified, before Abiy, the 2019 Nobel Peace Prize laureate, went there to carry out a counter-offensive, which led to the withdrawal of the TPLF.

But these hostilities pale in comparison to the incessant tank and artillery attacks on the residents in recent weeks.

“You can’t win against mortars with a Kalashnikov,” explains Ibrahim Abdala, an Afar militiaman who was recently shot in the chest.

Civilians who have fled the fighting describe exhausting and endless journeys, on foot, to safer cities, but unable to feed and shelter them.

According to documents consulted by AFP, in January there were 294,000 displaced persons and a spokesman for the region specified that the figure now reaches 350,000.

These displaced people do not know when they will be able to return to their homes, while according to some reports the western border of Afar is occupied by the TPLF.

“All the schools, clinics and hospitals have disappeared on the western border,” observes Valerie Browning, a humanitarian worker who has lived in Afar for more than 30 years. “Afar was looted, vandalized and there is not much left,” she notes.

These claims could not be independently verified.

During AFP’s visit, dozens of women and children sat in the shade of an acacia tree next to a dry river bed one afternoon, sharing scant food.

“You see the truth with your own eyes. We have been kicked out of our houses and we are eating cookies,” explains Mohamad Adem Endrisi, a 32-year-old teacher from Kuneba village. “There are pregnant women among us and we don’t even have a rug to sleep on,” he laments.

The TPLF claims that it was “forced” to launch an offensive in Afar following attacks by pro-government forces on its positions in Tigray, stating that it “does not intend to stay long” in the region.

Afar, region of northern Ethiopia forgotten and “plundered” by the war