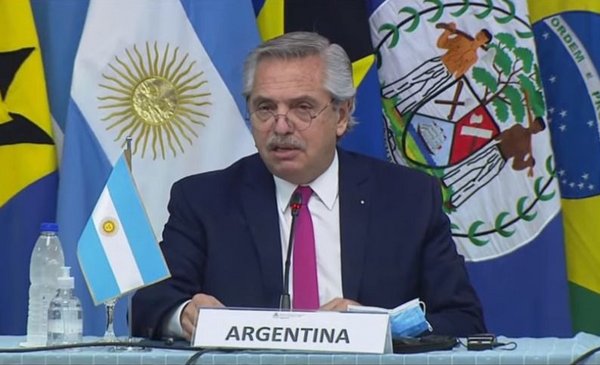 Unanimously, the member countries of the Community of Latin American and Caribbean States (CELAC) elected Argentina for the presidency pro tempore of the international organization. President Alberto Fernandez thanked the countries for their support and said that he takes “that trust as an acknowledgment that Argentina is capable of articulating dialogues and consensus“.

Alberto Fernandez held that many want the countries of Latin America and the Caribbean divided so that they can easily exploit them. “I am very grateful to the countries that supported us in negotiating with the International Monetary Fund. I really appreciate it, because one feels much stronger knowing that the Latin American and Caribbean brothers support us“, Held.

The head of state cited the speech of Gabriel Garcia Marquez upon receiving the Nobel Prize for Literature. “This was pronounced four decades ago and although in Latin America the right to freedom and democracy has been achieved, we still have not achieved the social equity that García Márquez was asking for.”

For his part, the Chancellor Santiago Cafiero thanked the support and asked to work for “institutional strengthening with spaces for dialogue and agreement.” “For Argentina it is a great honor to head the Pro Tempore Presidency in this year 2022”, Cafiero stressed, and expanded: “It is a pride because we understand the timeline in which we are, because this does not start today, it is not something that it starts from scratch ”.

“For our country to have received unanimous trust, it is really a commitment and that is how we want to propose it, as a commitment to collective work,” emphasized the Foreign Minister.

The 15 missions posed by Argentina

“This is the work plan that Argentina proposes. It is the starting point, it is an agenda open to discussions, to incorporate new challenges, new goals, and as you know this is collaborative and community. We want to discuss, debate, within the framework of respect, understand each of the particularities of each of the countries, in order to have a comprehensive, participatory and deeply democratic work agenda, ”said Cafiero.

During the Plenary Session of the XXII Meeting of Ministers of Foreign Affairs of the Community of Latin American and Caribbean States (CELAC), Cafiero assured that they will “continue developing programs that emphasize food sovereignty to fight poverty and hunger”.

The Argentine Foreign Minister thanked the delegations present the support that the region has always had with the Malvinas cause. “This year will mark 40 years of the conflict in the South Atlantic and continue to count on the support and understanding that the claim to Argentine sovereignty is made in peace and through diplomatic channels, strengthens Argentina’s position to seek a negotiated exit with the United Kingdom as established by the United Nations ”.

Finally, Cafiero stated: “The Pope Francisco he said, in his encyclical Fratelli TuttiMay the world be guided by an ethic of international relations. CELAC is a vivid testimony that this objective is not a utopia. “

Alberto Fernández assumed the presidency of Celac: “They want to divide us”