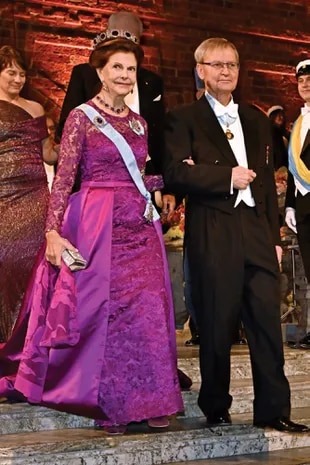 With all the pomp it deserves, the Nobel Prize gala was held on Saturday the 10th, one of the most important events on the agenda of the Swedish royal family, which recovered its splendor and glamor after a more austere 2021 edition after the crisis. healthcare due to Covid-19. In the Stockholm Concert Hall, the King Carl Gustaf presided over the ceremony and delivered the respective diplomas to figures such as the French writer annie ernauxwinner of the Nobel Prize for Literature, the Swedish Sbefore Pääboawarded the Medicine Award, and the Americans Ben S Bernanke, Douglas W. Diamond Y Philip H Dybvig in Economics, among others. Accompanying her Majesty were Queen Silvia, Crown Princess Victoria and Princess Sofía –who turned 36 that same week–, who were also protagonists by giving a lecture on style with their party dresses decorated with spectacular jewels that deserve a chapter apart.

The Queen took her costume to another level with high-impact jewellery: an amethyst tiara, necklace, bracelet and brooch known as the “Queen Josephine amethyst set”, made with precious stones over two hundred years old that were used by the Queen. wife of the Emperor Napoleon and who ended up in the royal jeweler through his granddaughter, Josephine of Sweden.

In the case of the crown princess, she chose the six-button tiara, a jewel from the collection of Princess Margaret of Connaught, granddaughter of Queen Victoria and Princess of Sweden by marriage to Prince Gustaf. And, although she rarely wears them because of their priceless value, she wore the Vasa earrings, one of the oldest pieces in the royal jeweler (they date from the 18th century).

Princess Sofía, meanwhile, wore the Palmette tiara, which her in-laws gave her for her wedding to Prince Carlos Felipe, but on this occasion, for the first time, she finished it off with topazes.

At the same time, the Norwegian crown took over the Nobel Peace Prize award ceremony held in Oslo. In the City Hall of that city, the Center for Civil Liberties of Ukraine, the Russian human rights NGO Memorial (dismantled by the authorities of his country) and the Belarusian activist Alés Bialiatski, currently in prison, were recognized.

Prince Haakon and his wife, Princess Mette-Marit, were present hand in hand and very smiling, to accompany the kings Harold and Sonia. The Scandinavian capital was a real party on the day that rewarded those people and institutions whose work made a great contribution to society.

All the splendor. The women of the Swedish royal family shone with their costumes and jewelry at the Nobel Prize gala