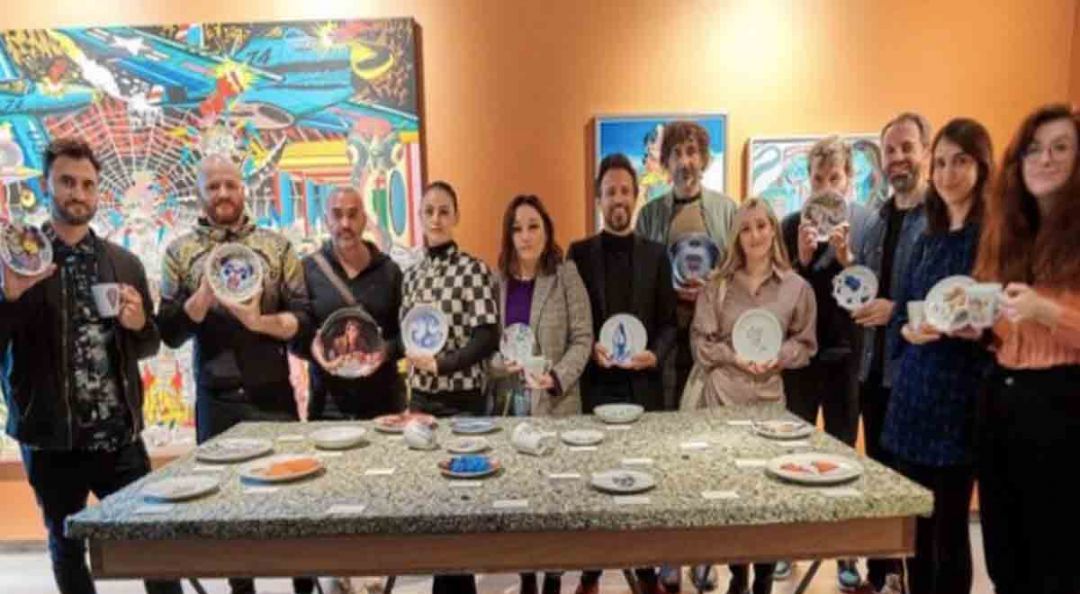 Action Against Hunger, in collaboration with the Cartuja de Sevilla, has presented this Wednesday a vsolidarity ajilla with original designs by 24 artists. Among the participants in the project are the singers Alejandro Sanz, Beatriz Luengo y Yotuel, the writer and Nobel Prize winner Mario Vargas Llosa, the photographers Eugenio Recuenco and Rocío Aguirre and the illustrator Abe the Ape, among others.

With this project that we have called ‘Solidarity tableware against hunger’, we want to offer a new look at the problem of hunger, take it out of its context and turn it into a call for reflection on those who can eat every day, compared to those who do not have a plate on their table “, commented the director of Marketing Communication of the organization, Laura Fontanet.

He also stressed that the tableware “can be a gift for this Christmas, which goes a little beyond the stereotype that a donation means, in the NGO environment.”

The tableware has the support of 24 artists from different creative fields who have left their stamp on the 30 pieces to create a unique design on each plate and each cup. Alejandro Sanz, Beatriz Luengo, Yotuel Romero have not wanted to miss the opportunity to participate in the project, which has such characteristic designs as the Spanish singer’s ‘Corazón Partío’.

Among the designs also there is a poem by the poet Sara Bueno, a dedication by the Nobel Prize winner Mario Vargas Llosa or an illustration by the painter Álex de Marcos.

11 of the artists involved in the project have attended the presentation of the solidarity tableware, at the Solo Space in Madrid, and who have taken the opportunity to share the experience that they have had to make their designs.

Thus, the illustrator Abe The Ape has said that his design reminds him of his grandparents, country people who lived off the land and claimed the land as a source of wealth that must be cared for. Ale Burset has commented that his design came from the idea of ​​a photo in a book on the baroque and wanted to relate the conceptual idea to the cause. The God of the three, also an illustrator, has added that he usually works with animals, with pop culture as a reference, and for him, “hunger is like that primitive and wild animal that devours you.”

The illustrator El rey de la ruina has focused his creativity on the heart, the heart as that human element where solidarity resides, which is the joint work with which to solve world hunger.

Juan Francisco Casas has illustrated in a Magdalena that feeling of waiting so subtle that it causes hunger. Mach Studio, for its part, wanted to unite the problem of hunger with the climate emergency by referring to the sea, a place that it sees is becoming a landfill and that we need to be able to continue feeding ourselves.

Ofelia Hernández, with her illustration, has made a social criticism that reflects that there is a lot of food that is thrown away and, at the same time, many people are starving. The writer Patricia Benito has shared a poem with her hands as symbolism and, at the same time, saviors of the world “are those who take away fear and protect love.”

Sara Bueno, also a writer, has approached hunger in a kinder way, with memories of her childhood, of that satiated hunger that she felt since she was a child and that she demands that all the girls and boys in the world can feel.

Action Against Hunger recalled that the health crisis caused by the pandemic has led to an unprecedented economic crisis throughout the world. In 2020, 811 million people in the world suffered from hunger, 118 million more than in 2019. In the case of Spain, it is estimated that there are around 11 million people in
risk of poverty, that is, a quarter of the population.

We believe that it is very important to work on different solidarity projects, which cover different sectors “, stated Laura Fontanet, who expressed her gratitude to the artists.

It is such an inspiring project to create a truly unique tableware, which we hope will accompany many special moments, and at the same time, it restores hope and encourages us to fight for a world without hunger “, he adds.

The solidarity tableware from Action Against Hunger, made in Spain by the Cartuja de Sevilla, It consists of 6 dinner plates, 6 soup plates, 6 dessert plates and 6 cups with a saucer.

A total of 30 pieces that stand out for the originality of their design.

The tableware can be purchased through the official website ‘www.vajillacontraelhambre.org‘where you can see all the details of the project, with videos of the artists themselves in which they tell the creative process of their design.

The price of the complete tableware is 605 euros, approximately 15,600 Mexican pesos, although you can choose to buy individual packs with the 6 dinner plates, 6 soup plates, 6 dessert plates or the 6 cups with saucer. The delivery will be made at home, with a packaging that summarizes the different designs of the project.

Artists, writers and musicians collaborate to create a solidarity tableware against Hunger