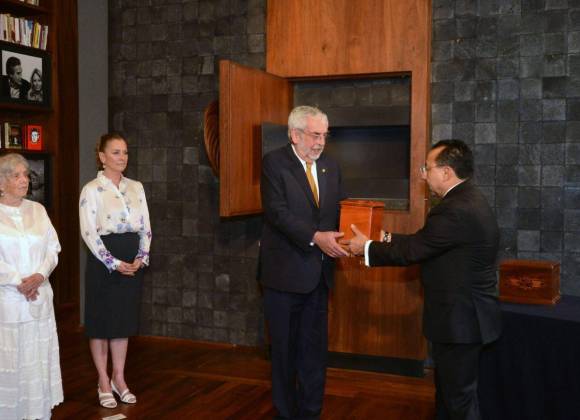 “The legacy of (Octavio) Paz is in the care of the city and rest assured that we are going to do everything in our power, together with the Ministry of Culture, the National College, so that this Cultural Heritage of our country is in good hands and be recognized”, he explained claudia sheinbaumHead of Government of Mexico City.

Sheinbaum expressed himself in this way during the inauguration of the Memorial Octavio Paz and Marie-José Tramini -widow of the poet and diplomat- and the Piedra de Sol Sculptural Fountaina commemorative act in which Paz’s remains were delivered along with those of Tramini to the Colegio de San Ildefonsoplace where the Mexican poet studied.

In this sense, the head of the Government of CDMX announced that the construction of a trust that allows the self-sustainability of the projectfor the purpose of specifying the Punctual Program for the Classification of Assets by the National Institute of Fine Arts and Literature (INBAL).

With this, Sheinbaum added, what is sought is “collectively define the social purpose of real estate and, with the exception of cases not delimited by the poet himself, promote the intensive dissemination of the intellectual legacy that the people of Mexico inherited from their Nobel Prize for Literature”.

The head of the Government of Mexico City assured that the documentary legacy of the poet will be part of the Bodega Nacional de Chapultepec, a space is currently under construction in the Fourth Section of this forest and that is part of the project that seeks to rescue and modernize the forest.

Paz and Fuentes: ‘Two ways of seeing the world’ that cut short a friendship

In this sense, Sheinbaum indicated that the fact deposit the ashes of Paz in the Colegio de San Ildefonso is fulfilled with eThe desire of the Mexican poet and diplomat not to bury him in the Panteón de Dolores, “destination that he detested so much”.

“And, at the same time, we comply in not separating him from his life partner and that his remains and memories remain here, in this emotional space of his youthful duties and pleasures. Here at his beloved National Preparatory SchoolSheinbaum specified.

With information from the EFE Agency.

Ashes of Octavio Paz, Nobel Prize for Literature, are deposited in the Colegio de San Ildefonso