The ceremony of the thirtieth edition of the Reporters Without Borders (RSF) Award for Press Freedom, held this December 12 in Paris in the presence of the 2021 Nobel Peace Prize, distinguished Iranian journalist Narges Mohammadi (Courage Award) , to Ukrainian journalists Mstyslav Tchernov and Yevhen Maloletka (Impact Award) and the Moroccan journalist Omar Radi (Independence Award).

For 30 years, the RSF Prize for Press Freedom has recognized the work of journalists or media outlets that have made a notable contribution to the defense or promotion of press freedom around the world. Organized in Paris after being hosted in London, Berlin and Taipei, the awards ceremony was held on the Champs Elysees in the presence of Dmitri Muratov, editor-in-chief of the Moscow newspaper Novaya Gazetaand the Ministers of Culture of France and Ukraine, Rima Abdul and Oleksandr Tkachenko, respectively.

The awards have been given to the Iranian journalist Narges Mohammadi, currently in prison for his defense of press freedom and human rights (Courage Award); to Ukrainian journalists Mstyslav Tchernov Y Yevhen Maloletkathe only ones who documented for three weeks the bombing of the city of Mariupol, in Ukraine (Impact Award) and the Moroccan journalist omar radi, currently imprisoned and victim of judicial harassment for his investigations on sensitive issues (Independence Award). Total, fifteen journalists and media from as many countries They were nominated for the 2022 awards.

In his opening speech, Russian journalist Dmitri Muratov, 2021 Nobel Peace Prize Laureate, paid tribute to his partner Anna Politkovskaya, as well as to the other 1,200 journalists murdered in the last fifteen years, and highlighted the “new era of confrontation between dictatorial or authoritarian regimes and independent journalism”. “SIn the past, journalists were assassinated, now entire media outlets are being killed”, Muratov has sentenced, praising the courage of the Philippine journalist Maria Ressa, with whom he shares the Nobel Prize and who currently faces a sentence of 100 years in prison.

“In each edition, this award is given to extraordinary people, who practice journalism so that democracy and human rights are kept alive, so that the challenges of humanity can be addressed, both globally and locally, and, as he said Albert Camus, simply to “prevent the world from coming undone”, said RSF Secretary General Christophe Deloire at the opening of the award ceremony.

The jury for this 30th edition, headed by French journalist and columnist Pierre Husky, president of RSF, is made up of eminent journalists and defenders of freedom of expression from around the world. Several winners in previous editions have participated in the ceremony and have been in charge of delivering the prizes: Can Dündar, former editor-in-chief of the newspaper cumhuriyet in Turkey; Lina Attalah, Co-Founder and Editor-in-Chief of madam masr, independent Egyptian newspaper and Matthew Caruana Galizia, an investigative journalist and son of Maltese journalist Daphne Caruana Galizia, killed with an explosive in her car, in 2017.

Imprisoned almost continuously for the past twelve years for his fight for human rights and press freedom, Narges Mohammadi is a symbol of courage. Even from prison, she continues to report on the situation of the prisoners, especially women. His life is a constant battle, in which she has to multiply the sacrifices so that his voice can transcend. Married to a journalist, Taghi Ramani, she has two children whom she has not seen grow up: since 2011, she has only spent a few months out of prison. Despite her heart problems, she has received 154 lashes and other ill-treatment and torture. However, she does not lose hope and continues to call for civil disobedience, always with a smile on her face. She has published dozens of articles from prison, made a documentary, and written a study on so-called “white torture,” White Torturebased on interviews with 16 detainees. 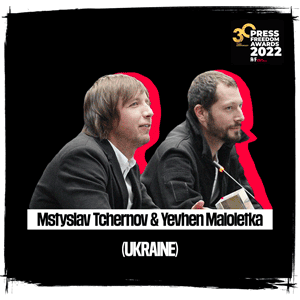 They are the only international press journalists who managed to keep record the consequences of the fighting and bombardments in Mariupol (Ukraine), for 20 days last March, to Associated Press. His photo of the pregnant and wounded woman after the bombing of the Maternity Hospital went around the world, alerting international public opinion to what was happening in the besieged city. Persecuted by the Russian army due to the impact their images caused, Mstyslav Tchernov and Yevhen Maloletka worked in extremely difficult conditions, but received help from the population, aware of the importance of their work. 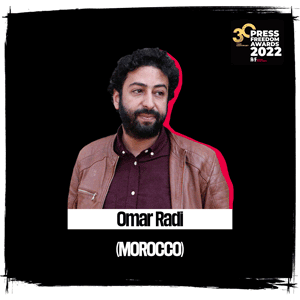 This investigative journalist has spent more than ten years investigating sensitive issues, such as corruption, and is a victim of judicial harassment. In June 2020, a lawsuit was opened against him. investigation for “espionage”, just after Amnesty International revealed that his phone had been hacked using Pegasus spyware. A month later, he was imprisoned after a complaint for “rape”. These two different cases were, however, treated jointly by the authorities, which raises questions about the fairness of his trial, especially since this journalist and human rights activist was already in his sights for several years. In December 2019, he was sentenced to four months in prison for “contempt” for a tweet published eight months earlier. To denounce his preventive detention, Omar Radi went on a hunger strike, which he had to abandon 21 days later, due to Crohn’s disease that he suffers from. Since then, he remains very weak.