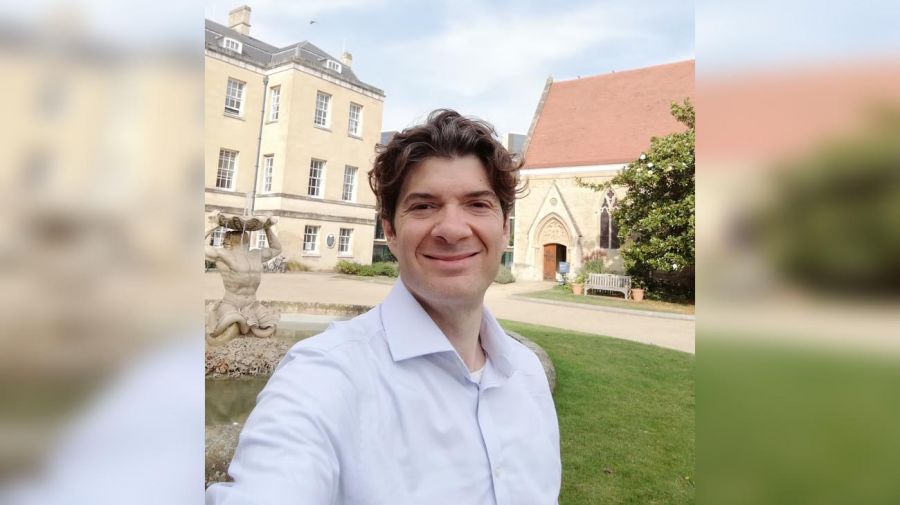 The name of Fernando Alday It will go down in the history books along with the greats of science. This was ordered by the distinguished British scientific society the Royal Society by electing him as a member for his outstanding mathematical contributions to string theory.

The century-old British scientific society to which giants such as Isaac Newton, Albert Einstein or Stephen Hawkingnow also counts among its ranks with the Argentine scientist born in Arrecifes, north of the province of Buenos Aires.

“It’s like an Oscar award for achievement in the field of science”Fernando tells PROFILE, acclaimed for having developed mathematical tools to understand fundamental issues in Quantum Field Theory and Quantum Gravity.

The son of a primary school teacher and a merchant, the story of the math-obsessed Oxford University professor is priceless. A curious boy who dreamed of the universe and the stars obtained one of the highest recognitions in the scientific world at 44 years of age.

Who is Fernando Alday, the Argentine scientist who gives “chair” at Oxford

The Oscar of scientists

Every year the distinguished entity appoints 60 new fellows (member) among scientists from all disciplines, nominated by a select committee. “It’s like an Oscar for lifetime achievement. It makes me feel super proud, at first I didn’t fall”says Fernando Alday, one of the four Argentines who have this recognition, including the Nobel Prize in Medicine Bernard Houssay.

“This year the president of the AstraZeneca laboratory and the director general of the World Health Organization were also recognized for their role during the pandemic. Then there are people who did things in quantum mechanics, mathematics, engineering. Being among them represents a great honor“, he adds.

The award comes on the heels of two contributions related to string theory. Despite living abroad for 20 years, with an intact Argentine accent, the expert explains that his contributions involve “dualities“, related to the scattering amplitudes with minimal surfaces (like soap bubbles) in anti-de-Sitter space, a theory known as Alday-Balmaceda.

While the other, known as the AGT correspondence, relates the correlation functions in a two-dimensional theory to the spectrum of four-dimensional gauge theories. “It was quite crazy on a mathematical level because mathematicians in one field calculated one thing and those in another field calculated another, and they didn’t mix, and we realized that they were calculating the same thing. There was a bit of luck linked to having to ask the right question that leads to something interesting”he adds.

With humility as a standard, Alday recognizes the people who came across his path, who were key in the development of the two ideas that catapulted him to the highest recognition in the scientific world. “I learned a lot from the people around me, debating I started to develop ideas together with other people. I was lucky that these worked and were applied by other people in the theoretical field such as physicists and mathematicians”.

From Arrecifes to the world

Fernando Alday was born in San Rafael, Mendoza, into a middle-class family that later moved to Arrecifes, a city in the north of the province of Buenos Aires. He remembers that when he was six years old, his parents gave him an atlas where he saw the map of the stars, the solar system. “I was always very curious. I liked mathematics a lot and I spent my time solving puzzles and puzzles”remember.

What started as a hobby became his greatest passion and he soon realized that this was his manifest destiny. “When I was a teenager I started reading popular books about fundamental particles and the laws of the universe and I said: I want to dedicate myself to this. And that’s what I did”.

After passing through the University of La Plata and the distinguished Instituto Balseiro de Bariloche, Alday continued his postgraduate career abroad. He lived in Trieste (Italy) where he did a doctorate, and then two postdocs in the Netherlands and the United States.

His brilliant academic career around string theory caught the attention of the University of Oxford who first summoned him as a professor of Mathematical Physics in 2010, and ten years later elected among 100 candidates for the Rouse Ball Chair, the fifth to obtain this position. His predecessor was the emeritus Roger Penrose, who won the Nobel Prize in Physics in 2020 for mathematically proving the existence of black holes.

The coronavirus pandemic prevented Fernando Alday from returning to Argentina to visit his family and friends in Arrecifes. “I always felt very Argentine. I miss my family and friends, the mate, the alfajores and the empanadas. I did my entire degree in Argentina for which I also feel indebted,” he says.

Although he does not think of returning to Argentina definitively, Fernando Alday acknowledged that “there are many valuable people and academies” in the country.

“There is enormous potential, very good people. Of course Juan Maldacena is the best example but there are other very good people there and around the world who serve as ambassadors of Argentine science. They do a first-rate job. I think they are highly respected on everything in my field of string theory,” he concludes.

Between Newton and Einstein: an Argentine scientist was elected a member of the outstanding Royal Society