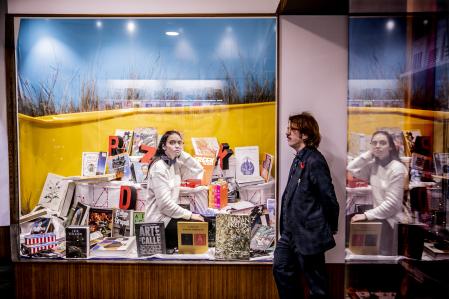 “This Christmas, if people go to bookstores, they will find books,” says Èric del Arco, president of the Gremi de Llibreters de Catalunya, confidently. He points it out to reassure readers alerted by the problems that a part of the distribution of books in Catalonia is having since Àgora and Les Punxes joined in a new logistics platform, EntreDos, in the summer, which has not yet started. Many of the novelties that this company distributes –those from publishers such as groups 62 and Enciclopèdia, Anagrama, Angle, Blackie Books, Comanegra or Club Editor: it represents almost 50% of the books in Catalan– are not arriving and the campaign of Christmas.

Del Arco explains that this week the novelties of the next Christmas campaign are arriving at the bookstores and there shouldn’t be any surprises, but it’s not that easy, because if you have to place any more orders it can take fifteen days, “and without the sure it will come.” But also “there are cases in which things arrive that you have not asked for and that makes you suffer… but we arrived at Christmas with a good deadline and when the dates get closer we will see what happens”. The Documenta bookseller recalls that there is a lot of anger among the union members, but “there comes a point where they take it as a joke” and even memes run through their network: “Everyone does the best they can and things don’t work out.” they fix, which causes frustration among booksellers, publishers, commercials…”. It is not only with the fact that the books arrive or not, but sometimes they arrive with poorly made delivery notes and “the way of functioning is broken”. “There is a lot of uncertainty, and maybe a book arrives three times and it takes three times as long to place orders,” he concludes.

With the Christmas campaign on vigils, the concern of many publishers increases. There is trust, yes, because there is no other choice, they cannot do anything. For Angle Editorial, for example, it would have to be a very good campaign since they have the recent Nobel laureate, Annie Ernaux, but it turns out that for the moment many of her books have not arrived properly on large surfaces. “For months they have been telling us that it would be fixed in two weeks, and now the concern is very big,” says the editor Rosa Rey, who explains that it was not a good year for billing and they hoped that with the Nobel sales it would be reversed. , but now the hope is to save the furniture. Rey explains that it seems that an intermediate solution has been found: to pass off titles that are not novelties to ensure that they are in bookstores. But she fears that some books that had gotten off to a good start “like against nostalgia by Maria Canelles are cornered by the lack of reruns”.

According to the general director of Anagrama, Eva Congil, EntreDos has taken technical measures that ensure that they will be noticed, both with respect to the news and the background books. “We continue to trust, but it will not be an easy Christmas because we are in their hands”, and that no publisher had requested any change from the distributors. Like all those affected, they have noticed a significant loss of billing, and if the billing chain is broken, it can create a serious problem. Congil also does not rule out that legal measures may end up being taken, but she also confesses that “this would not suit anyone in the sector.”

For a small publisher like Sidillà, the problem “is very serious. They tell you that they are fixing it, but we don’t know whether to believe it or what”, explains the editor Judit Pujadó, who gives a piece of information to show the disorder: “There are 4,000 of our books whose location is unknown”. If they had known, they would have delayed some titles, she says. “Last week the shipments of the Christmas campaign should have been made, but I still see orders that have not gone out, and there are bookstores that tell us that they receive poorly made delivery notes and cannot make returns”, so in order not to risk perhaps they order books from other distributors. “It’s very frustrating because we promote books that we don’t even know if they’ll be in the presentations, and we can’t do anything,” she says.

Sebastià Portell, as a writer and as president of the Catalan Language Writers Association (AELC), calls for “the most vulnerable link” to be taken into account. “In the best of cases, we receive 10% of the sale price, and a large part of the authors cannot make a living from it, and perhaps that is why in this crisis we are the least visible,” he points out. The AELC claimed in September “possible ways of compensation or compensation for this mishap”, because they understand that there has been a “lost profit”, although it recognizes that it is very difficult to quantify how many books have stopped selling. As an author who released a book in September (the heightsEmpúries), says that he cannot complain at all, but “how would it have been if everything had been normal?”

The president of EFTA, Sebastià Portell, demands that “the most vulnerable link” be taken into account

“There is a feeling of impotence and frustration to see how the books have difficulties to arrive, but the only thing I can do is continue claiming it, says another affected author, Pere Francesch. That is why he makes many presentations of The silence of the others (Column) wherever it can, because “books are sold one by one.” “When you’re new, if they don’t know you very well, maybe they ask for your book once in the bookstore, and little else,” she adds.

And what does EntreDos say? “We prefer not to make statements.”

#LabMeCrazy! Science Film Festival brings the best film and science documentaries to Pamplona
Five Nobel Laureates passed through the cloisters of the UBA in its two centuries of history
Ephemeris of November 20, 2022: What happened on a day like today?
Tweet
Share
Share
Pin
Other links: https://awardworld.net/resources/