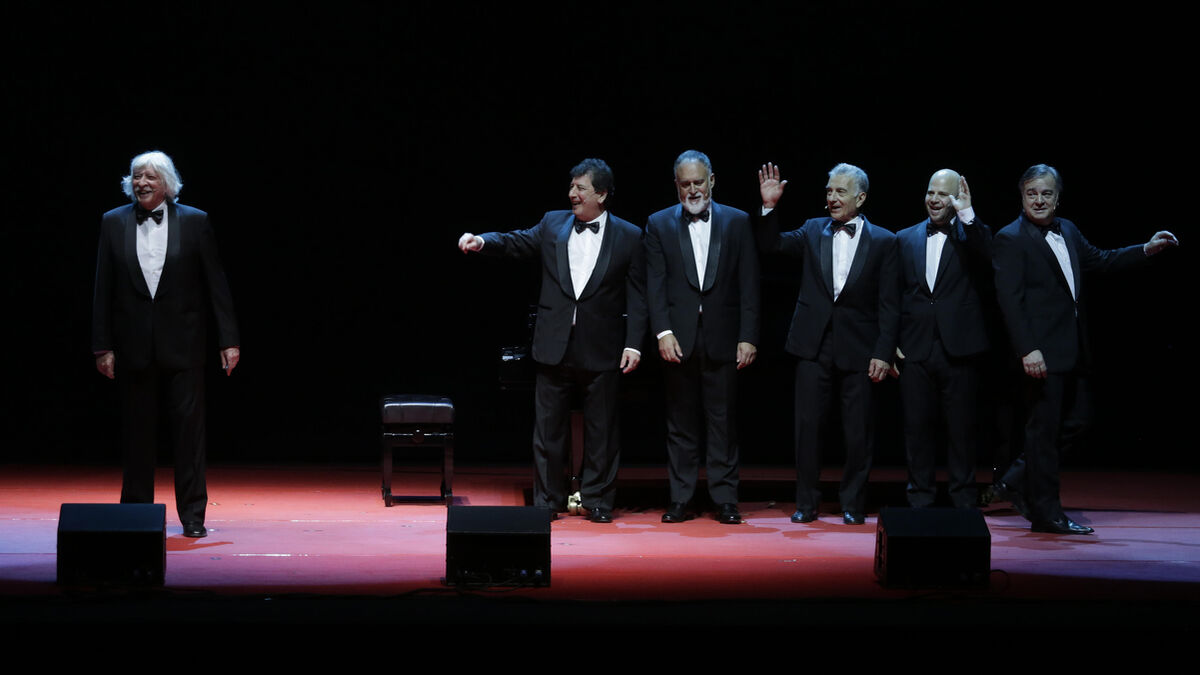 -Les Luthiers has been making people laugh for 55 years with their mixture of music and humour. Recently, Joaquín Reyes affirmed that comedians age badly because they lose their grace. What is your secret to maintaining the attractiveness half a century later?

-The experience of barely half a century does not enable me to respond to Joaquín’s respectable opinion. I will when he is old.

-In so many years of experience in which Les Luthiers has had to survive many things, including saying goodbye to colleagues, has it ever happened to them as the writer who gave Marisa Paredes said in The flower of my secret: that, when he was going to write pink, it came out black?

– Not even the best of comedians is always fit for humor. From pink to black is one of the infinite transits of colors through which life drags us all; including comedians.

–Old Laughing Stock is a fun compilation that brings together some of his most celebrated works. What criteria have they followed to select or leave out the pieces?

-We have a very large repertoire; as to put together various anthologies. Every time we design one, we start from a rough first selection, a list of works that must seem very popular to us or, if not, that have some special musical or design weight. Then, based on the resulting long list, we refine the definitive repertoire, trying to offer a variety of genres and a variety of dramatic situations, an adequate combination of academic and popular music, and a variety of leading roles. The next step is the order of the pieces, which -according to a few variables- organizes the future of the show to make it have good stage transitions, its climaxes at certain points and its backwaters at others.

-Society has changed a lot in this half century, especially in recent years. Have you had to change your mood to adapt?

-I am sure that the deep mechanisms by which we laugh are unalterable. How they are used is characteristic of the individuality of each comedian. I don’t think it’s the humor that has changed, but the themes, the good and the socially abominable, the incorrectly political or – stealing the Pope’s idea – hermeneutics, which are constantly evolving. In more than fifty years of laughing and making people laugh, we have had to adapt the modes, themes and permissions (not always consciously), but not the forms, structures, procedures…

-And to adapt to a world of entertainment in which the youngest now arrive at theaters preceded by the success of their sketches on social networks?

-I imagine that each person will attract their audience with their own resources. We are preceded by the success of more than fifty years in the analog world.

-Do you use these tools to reach the new generations? Are they active on social media?

-We use them minimally because we are convinced that ours is the living. A Les Luthiers show is almost a rite of collective fun, a theatrical phenomenon that, therefore, can only be fully enjoyed sitting in the theater with many other laughers. Or, taking advantage of the idea of ​​”rite”, together with other celebrants.

-From The Mastropiero Awards, Lutherapia and now the anthology old laughing stock, They have gone out of their usual scheme a small introduction after which the musical group appears on stage and interprets the piece. Now, the works performed revolve around a particular theme: an award ceremony, a therapy session and a radio program broadcast, respectively. Why this change in a formula that had worked?

-We are humorists-parodists, not playwrights. Our shows have always been structured by linking small forms, parodies, scenes, musical genres; trying to make the succession as varied as possible and trying at the same time, somewhat brazenly, to generate a pretext that would justify such a heterogeneous succession of scenes and music. The first model, in our beginnings, was the parody of a classical music concert with commentary. We essentially played with all the rites of the classical concert, to which we added the participation of a “presenter”, a learned musicologist who linked the succession of works with supposed historical or musicological comments, especially referring to our emblematic composer: Johann Sebastian Mastropiero. Towards the middle of the ’90s we felt that this model of giving continuity was somewhat exhausted and the idea arose of looking for other procedures, other dramatic “pretexts” that would give a better sense of reasonable succession. One of them was the pivotal scene of Radio Tertulia, a magazine that talks about everything and that allows any musical genre to be introduced.

-Under this common thread of Radio Tertulia, new versions of The majas of the brigantine (nautical zarzuela), Who Killed Tom McCoffee (serial music), Praise to the bathroom (sanitary work) or Pepper Clemens sent the messenger, however the reverend left the herd (ten-step), among others. In addition, it includes new works such as dessert recipe, a culinary waltz performed with the “kitchen battery”, an informal instrument made up of 11 pans and 6 pots. Do new instruments always arise from everyday life?

-Most of the instruments are, in fact, built with elements of everyday life. But some are parodies of existing instruments—like our “Latin,” a quasi-violin built out of a can of ham—and others are of completely unknown lineage. One that is very characteristic of this group is the emblematic bass-pipe with a stick, that enormous instrument made of cardboard tubes, with two wheels and a bell at the end that the instrumentalist can make sound as he advances. It does not resemble anything known.

-In 2017 they celebrated their 50th anniversary and, this same year, they received the highest distinction granted by the Congress of the Argentine Republic: the ‘Honorable Mention Deputy Juan Bautista Alberdi’ and the ‘Honorable Mention Domingo Faustino Sarmiento’, as well as the Princess of Asturias of Communication and Humanities 2017, for being a “critical mirror and a benchmark of freedom in contemporary society”. What is left for them to achieve?

-We have lost hope of achieving the Nobel Prize. In Sweden they refuse to give it to comedians.

Carlos López Puccio, member of Les Luthiers “We have lost hope of winning the Nobel Prize. In Sweden they refuse to award it to comedians”