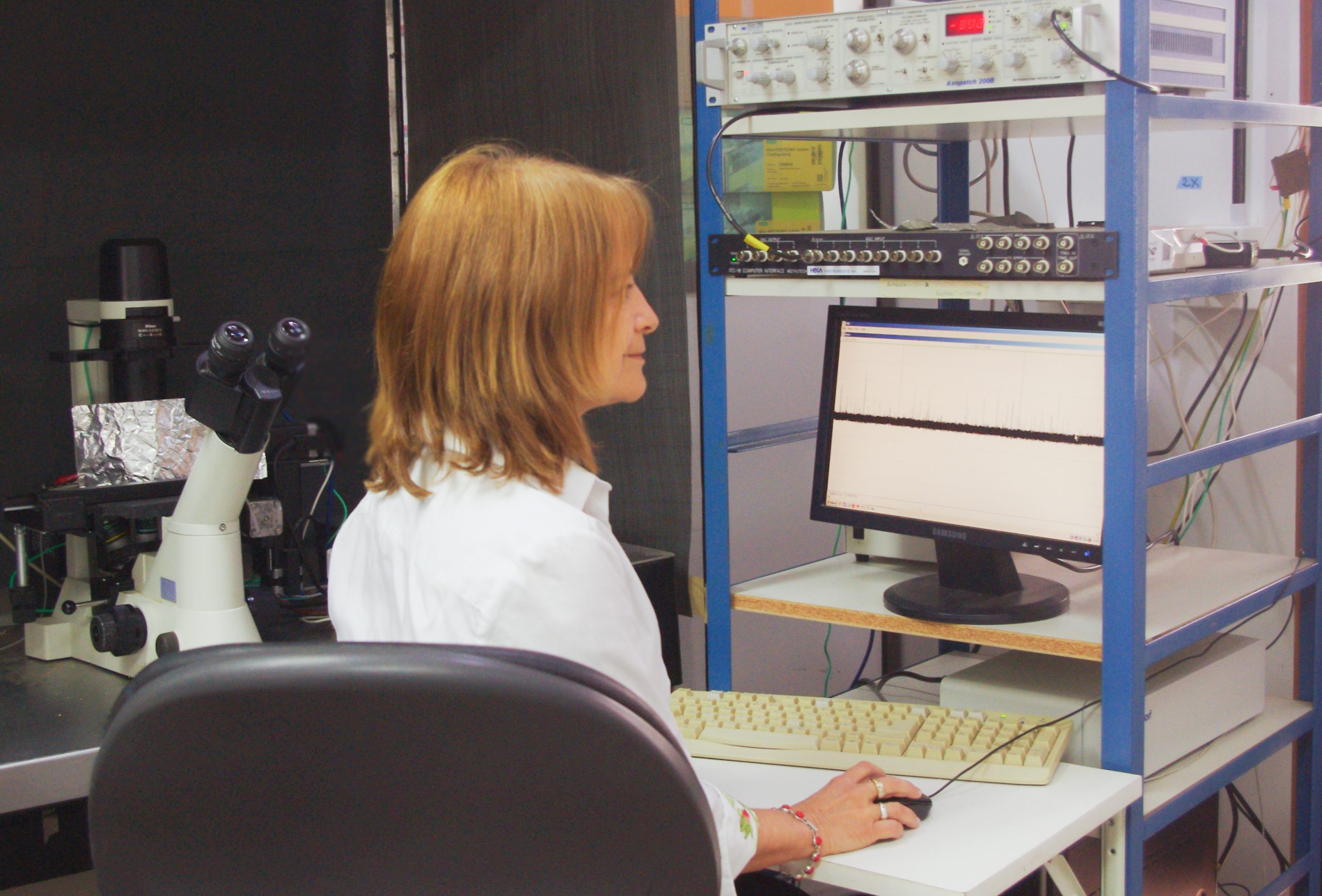 It is not fashionable, it is not cool either, and its contributions are not even recognized in the way they deserve, due to the generation of knowledge in a new branch that can provide answers to questions not yet resolved by the scientific world, using in many cases of the laboratory as the physical space for experimental development.

Bahía Blanca has the privilege of having among its neighbors a biochemist and biophysicist, director of the city’s Institute of Biochemical Research, as well as principal investigator of the National Council for Scientific and Technical Research and associate professor at the National University of the South in the chair of Pharmacology.

As if this were not enough, member of the National Academy of Sciences and member of said organization at the Latin American level. Her greatest popularity was achieved when she was awarded the L’Oréal-UNESCO Prize for Women in Science in the 2014 edition, an award that led her to occupy a place in the world elite of science. This is Cecilia Bouzat, who jumped the barrier of her low profile to open the doors of her life.

“I am 60 years old, I was born in Bahia, just like my father, now deceased. My mother is from Venado Tuerto. They both met in Buenos Aires when he was studying medicine and settled in the city where my paternal grandparents lived. Already installed here, they got married and formed a family, of which I am the third of six brothers”, revealed Bouzat, by way of a letter of introduction.

His training explains a good part of his professional achievements: “I studied at the Colegio La Inmaculada and English at the Instituto Southlands, where in addition to learning the language, we also had extracurricular activities for three hours a day”, while adding: “Of I have very nice memories of my childhood and the years that followed, riding a bicycle in the block where I spent my childhood, at the height of Belgrano 500, climbing on the roofs, were part of the adventures that we shared with that group of, back then guys.”

“I always liked to learn and, in high school, I detected my predilection for natural sciences, biology, chemistry, physics, mathematics. And when I was about to graduate, I first had in mind to enroll in Medicine, but finally I decided on Biochemistry. I started studying without knowing what it was about, but I was quickly captivated not only by the course, but also by the university rhythm”, he recalled, regarding those years when the obligations began to emerge.

Her prodigious memory and the value of affections led her to the following mention: “I made great friends that I still have since the entrance course at the UNS, such is the case of Marta del Valle who currently works as Director of the Hospital Municipal, María Luz Benvenutti and Laura González who work at Penna, María Eugenia Centurión who works at the university”.

“It is true that there were subjects that I liked less and only a few that I found boring, but in general I fully enjoyed my time at the house of higher studies. It was a very nice time because we had many activities in the University Club, indelible memories and a very intense stage because I did my degree in five and a half years”, clarified the scientific researcher from Bahia.

His destiny had prepared a challenge for him that would set the course: “In the final stretch before graduating, I linked up with a professor who was a researcher, an activity that at that time, due to my youth, I did not know could be developed in the city. She told me about a series of tasks that were being done at the Bahía Blanca Biochemical Research Institute and I asked her if she could join me. It was there that prior to receiving the title, I approached said organization to talk with the director and he allowed me to attend as an intern. Then I applied for a doctoral scholarship from Conicet, which they granted me for the good grade point average I had up to that time”.

“It was the year 1988 when I was able to enter and, from there, it was time for the doctorate and, thanks to the fact that my older brother was studying a master’s degree in law at Yale University, which is located in New Heaven, Connecticut. I packed my bags to visit him, it was January 1989, and I asked Dr. Barrantes, my director, if he knew of any laboratory because I was intrigued by what research was like in the United States,” Bouzat verbally reviewed.

The changes, for her, were dizzying but, at the same time, exciting: “I arrived, I stayed at my brother’s house, and the next day I presented myself with a letter to a professor who had been suggested to me to visit. Already in his laboratory, I was impressed because the differences with what one could see in Argentina were abysmal. There they did electrophysiology, something that was very novel for the time because they were applying a technique that later won a Nobel Prize in 1991. It allowed them to see how nerve stimuli were transmitted and how electrical currents were generated in the cells, which were produced for a single protein.

“The designed team made a revolution in the study of this subject that earned them that recognition. I liked that world so much that I insisted on visiting the laboratory as many times as possible, then I asked to learn the technique and stayed five months working. I was able to put together my own research project, which was very positive, ”she stressed, during another section of the conversation via video call with this journalistic medium.

However, the stage of making decisions arrived, some of which were not so pleasant: “Soon after, I had to return to Argentina, but my professor took care of the expenses to return to North America to close my first electrophysiology work. He attracted me so much the information provided by this technique, that it became less complex over time to apply it in Bahía Blanca, thanks to that enriching experience abroad. Back then it was possible to buy the equipment and to this day I continue to develop it in my laboratory”.

“When I finished my doctorate, I got married, we had our daughter (Camila, Mateo would later arrive) and the three of us traveled to the United States to do a post-doctorate that lasted for a year. It was given at the Mayo Clinic, located in Rochester, Minnesota, where I was able to perfect electrophysiology and other forms of measurement, in addition to incorporating molecular biology, which was very modern at the time,” he said, regarding another circumstance in which putting together the suitcases nourished her with extremely outstanding knowledge.

And he expanded it: “This dynamic allowed us to generate a protein in a cell, starting from the gene and simulate mutations that occur in patients, which made it possible for us to study that change and, thus, understand the bases of certain diseases. I was there for a year, because my husband had a leave of absence from work for that period, which initially made him return and I stayed a couple more months with my little girl before returning to Bahía Blanca, with the work already finished.”

“The positive thing is that a bond was generated that made me receive invitations with full payment to travel once a year to the United States throughout my scientific career, first as my director and then as colleagues. Without going any further, this year I spent three weeks in his laboratory where we discussed projects”, he evaluated, rescuing the positive aspects of said process.

Despite its avant-garde level, returning to Bahía Blanca was not easy: “Already in 1994 I settled permanently in my hometown, but it was not easy at all because there were no positions in the Scientific Researcher career, it was closed, that is why I was semi-unemployed. I only had a simple ten-hour assistantship at the University that was not even enough to pay the lady who took care of my daughter while she worked”.

“However, I continued to exercise and travel abroad to make a better living. Only in 1997, Conicet opened her admission to a scientific career and I entered as a researcher to get a stable position and apply for subsidies to work and create my work group, ”she acknowledged, sighing after a complex stretch of her career of she.

She became popularly known for a contest that became public and, taking into account that good causes are not usually news, the merit was double: “Having won the L’Oreal-Unesco For Women in Science award in 2014 was somewhat surprising, I attach great importance to it, but at the same time I consider that it attributes a great responsibility to me. This recognition forces you to rise to the occasion and there are times when it is more complex that what one plans experimentally comes out just as one imagined it for different reasons, including insufficient funds. The pressure is felt, because I understood it as a motivation to maintain scientific quality, with what the figure of women in the world of science implies, that gender has greater visibility in this field, always thinking of equal conditions still so necessary”.

Such was the repercussion that the Casa Rosada presidential office was made aware of: “Despite the fact that the meeting lasted only a few minutes, being received by Cristina Fernández de Kirchner was not something that happens every day, it seemed very good to me that a President, Whatever political space you are governing, understand the value of distinctions, because it implies that the State is interested in science. I took it from that point of view, as a praiseworthy attitude, in the same way that a footballer is received at the Casa Rosada for a sporting achievement that has greater popular repercussion. Making a scientist visible is an act of greatness”.

“At the labor level, during the pandemic we carried out an interdisciplinary project linked to Covid, in collaboration with biochemists from the Municipal and Penna hospitals and several UNS professors. It consists of epidemiological surveillance in asymptomatic health personnel, only to take advantage of research capabilities, to fine-tune a cheaper PCR at a time when few kits were available in Bahía Blanca, not even in hospitals ”, stated, in relation to his current work.

Empirically, he specified that “my line of work is currently based together with my group on the study of neuronal receptors that are involved in communication, what happens when their functioning is not optimal and we are looking for new drugs, both for neurodegenerative diseases such as Alzheimer’s disease or schizophrenia, based on basic research”.

“Finally, we have a line of work on a worm, which is a model organism and serves as a parasite, to study new drugs and achieve long-term antiparasitic action. Today I share my working time with fellows, others who have the same rank but are post-doctoral fellows, interns and students”, concluded Bouzat, with the nervous laugh of shyness that comes from being the center of attention.

Precisely the introverted personality before each proposal of an interview every time it is required by a communication medium speaks of its nobility and humility. However, every time she manages to jump that barrier and offers herself in a journalistic note, the community – which she also integrates as one more neighbor – manages to understand the real dimension of her work, leaving an intangible but absolutely essential legacy. .

Cecilia Bouzat, the renowned scientist who became a world reference