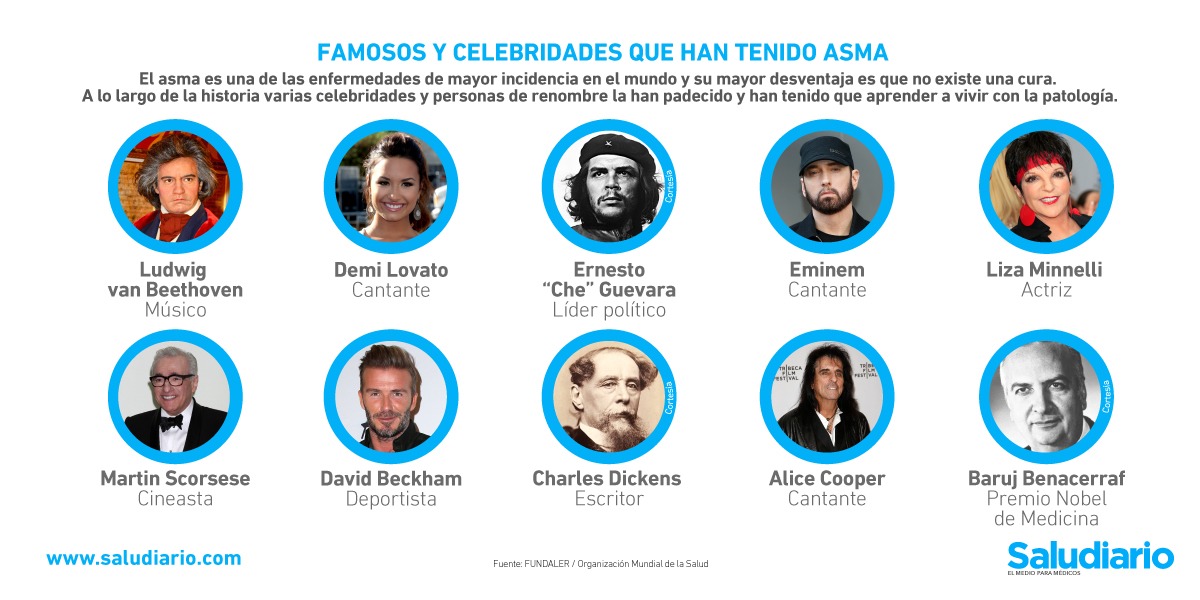 In terms of diseases there are no differences between professions or economic positions. Everyone is exposed and that is why it is necessary to promote prevention and health care. In this aspect, celebrities are no exception because they can present pathologies such as asthma just like the rest of the population.

It doesn’t matter if you have a huge fortune in the bank or a huge fan base because that doesn’t guarantee protection. In any case, the important thing is to receive a diagnosis as soon as possible to start the appropriate treatment.

What does it consist of?

Asthma is a chronic disease that causes the airways in the lung to become inflamed. When that happens there are difficulties in breathing. Although it can occur at any age, 30 percent of all cases occur in children between 5 and 14 years of age.

On the other hand, in no way should you fall into the mistake that it is a minor problem because your lack of attention can have serious consequences. Based on the World Health Organization (WHO), In 2019 alone, asthma affected 262 million people and caused 461 thousand deaths.

Therefore, the first Tuesday in May is World Asthma Day. According to the Ministry of Health (SSa), It affects between five and 15 percent of the population. With this in mind, it is considered one of the most common problems.

A disease without a cure but with treatment

Now, the biggest drawback of asthma is that it has no cure. That is why its symptoms must be accurately identified in order to start treatment immediately. While the follow-up must be strict and for life to avoid complications.

Due to its high incidence and the fact that it is a disease that appeared thousands of years ago, throughout history there have been several cases of famous people with asthma. They have occurred in all strata and in all countries.

Within this list are emblematic people such as the German composer Ludwig van Beethoven. Although he is remembered more for his deafness, he actually had more health problems throughout his life. But regardless of the adversities, he managed to stand out in the field of music.

Now, it is thought that people with a good physical condition cannot develop this disease, but it is a mistake. It should only be remembered that the English footballer David Beckham has also been one of those affected. But thanks to proper treatment he was able to continue his sports career.

While within this list of celebrities with asthma is also the Venezuelan doctor and immunologist Baruj Benacerraf. He is remembered to this day because in 1980 he won the Nobel Prize for Medicine together with Jean Dausset and George D. Snell.

Celebrities with asthma: From Beethoven to Eminem